CST
translation
Source:SMM
Today, most of the non-ferrous plate rose, the mining end of the disturbance, the market is worried about the supply of related metals. This time, Vale revealed that the company will extend the maintenance period of the Voith Bay (Voisey'sBay) mine in Labrador, Canada, for a period not exceeding three months.

SMM4 month 9: today most of the non-ferrous plate rose, mining end disturbance, the market is worried about the supply of related metals. This time, Vale revealed that the company will extend the maintenance period of the Voith Bay (Voisey'sBay) mine in Labrador, Canada, for a period not exceeding three months. (LHPP), one of the Changgang plants, will continue to operate and will produce nickel and cobalt at expected levels using stockpiled concentrate as raw material. Copper concentrate production will be reduced as a result of the shutdown of the mining area, with a maximum of 6000 tons affected in the first half of 2020. Nickel has also raised concerns about global supply as the Philippines halts some of its main operations to fight the epidemic. On the downstream side, the Ministry of Finance pointed out at a news conference today that it is necessary to extend the fiscal and tax policy support for new energy vehicles and extend the subsidy policy for the purchase of new energy vehicles for two years, greatly stimulating downstream consumer confidence.

Black iron ore rose 3.28%, threads rose 2.45%, and hot rolls rose 1.88%. Recently, the import and export of steel business is still in the doldrums. Moreover, when the scrap price remains low, the operating rate of short-process steel will also remain high. Although the resumption of work such as domestic infrastructure projects is constantly improving, the growth rate of demand is not as fast as the growth rate of supply. Therefore, the early April steel rising space is not much. However, due to the "gold, three, silver and four" steel peak season due to the epidemic and then transferred to the market for later macro stimulus policy optimistic expectations, steel prices may rise later this month. "[SMM Steel] is not dragged down by weak fundamentals during a strong rebound in snails.

Crude oil rose 3.15% in the previous period. At 10:00 this evening, the high-profile OPEC + emergency meeting will be held. Despite the optimism, the ING Groep NV said oil prices would fall back to $20 a barrel as global oil producers agreed this week to cut production below target levels and supply surpluses were likely to crush the global storage system. It will rebound to $45 in the fourth quarter. 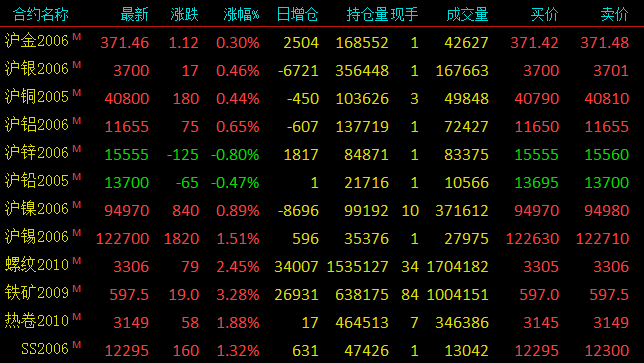 1.7 billion of the capital flowed into the market today, leading a strong lead in chemical futures inflows of more than 1 billion yuan, as if the bulls were certain that OPEC would cut production tonight. The second was precious metals and black commodities, which absorbed more than $200 million, while coal and non-ferrous stocks flowed more than $200 million. Specific varieties of iron ore continued to rise, more than 400m funds accelerated entry, followed by PTA, methanol inflow of more than 200m yuan each. Despite the same surge in coke, more than 300 million money has flowed out of the market to top the list of commodities.

Copper: today, the Shanghai copper main contract 2005 opened higher at 40980 yuan / ton in the morning, and the opening short entry pulled up the copper price to a daily high of 41080 yuan / ton. After a small drop, it hit the 41000 yuan / ton mark again, but the rally was unsustainable. The main force of Shanghai copper fell down the daily average line all the way down to 40790 yuan / ton, the center of gravity stabilized in this position, and closed at 40800 yuan / ton in the afternoon. In the afternoon, the main force of Shanghai copper climbed to 40870 yuan / ton under the impetus of the bulls. And maintain a small shock around 40840 yuan / ton. Near the end of the day, the price of copper fell again to a daily low of 40690 yuan / ton, with a small increase in the last session, closing at 40800 yuan / ton, up 180 yuan / ton, or 0.44%. The daily position of the main contract of Shanghai Copper increased by 241 hands to 101000 hands, mainly for the reduction of long positions, while the trading volume decreased by 27000 hands to 50000 hands. Shanghai Copper 2006 contract daily position increased by 1928 hands, to 101000 hands, mainly for short positions; trading volume decreased by 1.9 hands, to 48000 hands, the position is about to move backward. Shanghai copper index daily position reduction of 1739 hands, to 333000 hands, mainly for short reduction; trading volume decreased by 70000 hands to 141000 hands. Within the day, the main force of Shanghai copper opened high and walked low, and the center of gravity was significantly higher than yesterday, mainly due to the warming of market expectations of a production reduction agreement to be reached at the upcoming OPEC+ meeting today. Russia has also expressed its willingness to cut production and pull up oil prices in the short term, which will have an impact on copper prices. However, at present, the contradiction between supply and demand of international crude oil is extremely serious. India, as the third largest crude oil importer in the world, its crude oil demand has been sharply reduced by 70% as a result of the epidemic blockade measures, confirming the market's dimmer expectations of crude oil demand under the influence of the epidemic. Investors have reservations about the continued improvement in oil prices. The chairman of the Euro Group said yesterday that finance ministers had not agreed on a rescue plan for nearly 500 billion new pneumonia outbreaks and that market sentiment was becoming more fragile. Today, Shanghai copper closed in Yang, MACD Hongzhu slightly expanded, copper prices gradually away from the 20-day moving average. However, in the past two days, the 41000 yuan / ton pass is weak and the bulls are short of energy.