SMM4 8: today's overall rebound in the non-ferrous metals market, Shanghai copper rose 0.39% Shanghai nickel up 1.92% Shanghai tin up 0.62%, but Shanghai lead opened high and low, down 1.15%. Starting from 00:00 today, Wuhan lifted the control measures of leaving the Han and Hubei passageways and resumed external traffic in an orderly manner, and metal demand is expected to resume growth at an accelerated rate. Shanghai zinc closed down 1.04%, according to SMM data in March SMM China refined zinc production of 464200 tons, an increase of 2.48% from the previous month, an increase of 2.67% year-on-year. According to the SMM survey, the domestic refined zinc production in March is basically in line with the expectation of month-to-month increment. "[SMM data] domestic refined zinc production rose 2.48 per cent in March from a month earlier, and Global Ferronickel Holdings Inc, the second-largest nickel producer and exporter in the Philippines, said on Wednesday that it had decided to suspend mining operations to ease concerns about the spread of Xinguan pneumonia. The miner said in a statement that its decision had complied with an appeal by the local government in North Suriname to stop operations. The miner had previously shipped all its ore production to China.

Black rose across the board, with iron ore up 3%, hot rolls up 1.44% and threads up 0.9%. Today's black department higher major macro mood improvement, fundamentals do not have a significant positive for the time being. Downstream steel consumption is generally lower than previously expected. The sharp increase in the operating rate of miscellaneous electric arc furnace slows down the digestion rate of market inventory. At present, the steel stock is high, the output continues to increase, and the demand performance is unstable, the steel market fundamentals are still under pressure. March and April are the traditional peak seasons in the steel industry, but demand will be delayed this year because of the outbreak.

Crude oil fell 1.01% in the previous period. Domestic crude oil tumbled and international oil prices rose on Wednesday after markets fell for two consecutive trading days as markets looked forward to Thursday's meeting of the Organisation of the Petroleum Exporting countries (OPEC) and its allies to discuss cutting production to boost oil prices, which have fallen sharply as a result of the New Crown pneumonia epidemic. The latest news says OPEC + the regulatory committee has prepared a draft cut in production. The market is generally optimistic about subsequent negotiations such as OPEC and Russia. 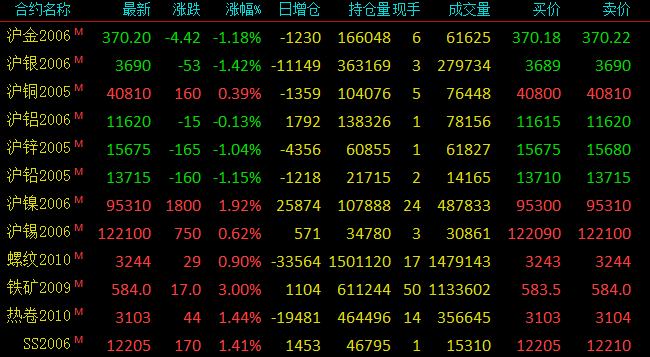 Copper: today, the Shanghai copper main contract 2005 jumped short in the morning to open at 40310 yuan / ton, at the beginning of the session briefly lower 40140 yuan / ton after the day low opened the trend of all the way higher. Copper prices in the jump on the daily moving average, gradually increased the range of pull, midday close at 40720 yuan / ton. In the afternoon opening, that is, straight up and climbed higher than the day's highest point of 41010 yuan / ton, after two times of high weakness, the pressure of 41000 yuan / ton level made a lot of short profit out of the market, the disk fell back to 40670 yuan / ton. In late trading, a small number of people entered the air and rebounded slightly, and finally closed at 40810 yuan / ton, up 160 yuan / ton, or 0.39%. The daily position of the main contract of Shanghai Copper decreased by 1359 hands to 104000 hands, mainly by short positions, while trading volume increased by 2436 hands to 76000 hands. Shanghai Copper 2006 contract daily increase of 1928 hands, to 101000 hands, mainly for the long increase in positions; trading volume increased by 4970 hands to 67000 hands, the volume is about to move backward. Shanghai copper index daily increase of 1088 hands, to 335000 hands, mainly for the long increase in positions; trading volume increased by 12000 hands to 211000 hands. Within days, the main force of copper in Shanghai opened low and walked high, mainly due to a rebound in optimism in the global market about the alleviation of the new crown epidemic. Many countries in Europe and the United States plan to gradually lift restrictions to restart the economy, and investors are expected to improve the outlook for copper demand. Although the decline in oil prices intensified in late trading yesterday affecting the capital markets, but today's positive news on oil production has effectively soothed investors' concerns, oil prices rebounded, contributing some of the momentum to the rise in copper prices. At the same time, there have been frequent reports of production cuts or suspension of operations at the end of the copper mine in recent days, and the increasingly tight supply of copper has provided support for copper prices. Shanghai copper today, the technical side of the favorable signs, stand firm 20 moving average, Shanghai copper is expected to continue to rise. However, the uptrend space is still affected by many risk factors, whether the 41000 yuan / ton barrier can be broken depends on whether the long energy has the confidence to take advantage of the pursuit or not.

Lead: within the day, the Shanghai lead main force 2005 contract opened at 13930 yuan / ton, the macro impact receded, Shanghai lead trend returned to its own fundamentals, as the relationship between domestic supply and demand quietly changed, the long profit stopped earnings, the Shanghai lead center of gravity shock weakened, and finally closed at 13715 yuan / ton, down 1.15%, position reduced by 1218 hands to 21715. Shanghai lead closed in the negative line, the continuation of the horizontal market, the 5-day moving average has turned down, and regeneration / primary upside down there are signs of narrowing, the recent fundamentals, pay attention to smelting waste supply changes, technical aspects, pay attention to the shock interval lower limit of 13600 yuan / ton support.

Zinc: intraday Shanghai zinc main force 2006 contract opened at 15710 yuan / ton, at the beginning of the day, short positions poured in, Shanghai zinc slowly moved down to 15650 yuan / ton, part of the buying capital inflow in the afternoon, Shanghai zinc up to repair the intraday decline, but further pulled up the lack of market confidence, Shanghai zinc empty more into the decline, closed down 15650 yuan / ton, down 1.04%, trading volume increased 2118 hands to 64829 hands, Positions increased by 2524 to 83054. Shanghai zinc is negative, the market is willing to sell short on a high, the main reason is that consumption is bleak, but in the short term, the supply-side story has not completely disappeared, and the decline in zinc is expected to be limited.