SMM4 8: although the recent global epidemic has not improved, but the market is also trying to digest the negative factors brought about by the epidemic. The macroeconomic environment has loosened again, and the market has once again favored venture capital. The Dow is up 25% from its lows, the S & P 500 is up 22% from its lows and the Nasdaq is up 20% from its lows, according to the data. In terms of gains, US stocks have entered a technical bull market, while other countries have also entered a technical bull market. Trump recently pointed out that he would restart economic activity as soon as possible, preferring to be slow. According to the mine, first Quantum received an order from the Ministry of Health of the Republic of Panama to suspend the operation of its Panamanian subsidiary, Cobre Panama Copper Mine, as a health control measure for the new crown epidemic until it was convinced that quarantine conditions had been met. The Cobre Panama copper mine is expected to produce between 285000 and 310000 tons of copper in 2020. On the other hand, the stimulus of the downstream automobile industry continues to increase, and the Ministry of Industry and Information Technology said that in the next step, it will further strengthen departmental coordination, improve support policies, actively stabilize and expand the consumption of new energy vehicles, and unswervingly promote the sustained and healthy development of the industry. The follow-up downstream consumption remains to be observed by the market.

The black series rose 2.73%, the thread rose 0.9%, and the hot coil rose 1.77%. Iron ore rose 3% in early trading, along with steel. The impact of the temporary noon abnormal events, the main pulling factors or the improvement of the global financial environment and the crude oil production reduction agreement may be reached, leading to the trend of commodities. On the demand side, the domestic steel mills maintain the normal production state, and the blast furnace starts to pick up steadily. On the supply side, foreign mine shipments continue to increase steadily, and iron ore supply and demand are both prosperous, but the current uncertainty comes from the impact of the epidemic on mine shipment and steel mill demand. Nippon Steel said on Tuesday that it would leave two blast furnaces idle in eastern and western Japan in response to falling demand for steel in cars and buildings amid the coronavirus epidemic, according to overseas steelmakers. Together, the two furnaces can produce 15% of the company's total capacity. "View details

Crude oil fell 0.91% in the previous period. With the recent twists and turns in oil prices, the market is more concerned about the upcoming OPEC meeting. Several Republican senators will be on the phone with Saudi Arabian officials on Saturday, according to a source familiar with the plan. The senators have proposed a bill that would withdraw US troops, Patriot missiles and the THAAD (THAAD) defense system from Saudi Arabia and deploy them elsewhere in the Middle East unless Saudi Arabia cuts production. Us senators will speak to Saudi officials two days after a scheduled meeting of the Organization of the Petroleum Exporting countries and its allies (OPEC+). 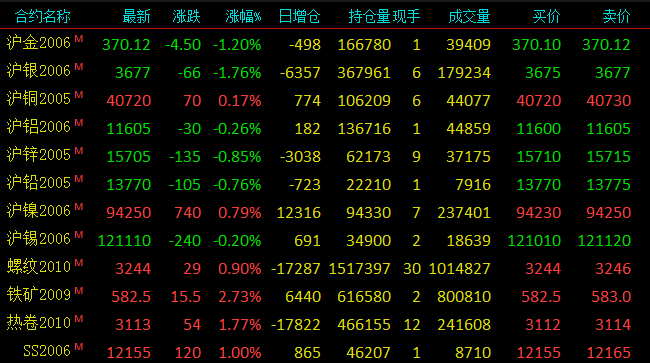 Zinc: the mainstream transaction of zinc in Shanghai was 15770-15815 yuan / ton, Shuangyan and Chihong were 15780-15825 yuan / ton, and Shuangyan and Chihong reported 85-100 yuan / ton. The mainstream transaction was 15700-15740 yuan / ton. The Shanghai zinc 2005 contract fell back in intraday trading and closed at 15705 yuan / ton in the morning market. Zinc out of recent highs, smelters stop selling normal shipments, market liquidity increased, the morning market for May reported water 80-90 yuan / ton, transaction is relatively stable, net average price and net average price down 5 yuan / ton more attractive, rising water and disk synchronous fall after the enthusiasm of traders to buy warmer than yesterday. Enter the second trading period, the market quotation differences, part of the rising water in May 90-95 yuan / ton, but also part of the rising water 80-85 yuan / ton, the low price transaction is relatively active, and the downstream day on demand to enter the market in a small amount of buying, the absolute price high downstream buying enthusiasm is still not high, the overall transaction within the day is warmer than yesterday.

The mainstream transaction of Guangdong zinc was 1566015750 yuan / ton, and the quotation focused on the discount of 1020 yuan / ton to the Shanghai zinc 2005 contract. The discount of 100 yuan / ton in Guangdong stock market was 10 yuan larger than that of the previous trading day. In the first trading session, futures prices fell from yesterday. The foreign quotation of individual cardholders is higher, but most of them look for the source of water goods, the market begins to adjust the price, and a small number of transactions are concluded between traders. Kirin, Mengzi, Huize and Tiefeng offer 20 yuan / ton to flat water for the Shanghai zinc May contract. The price of Qilin, Mengzi, Huize and Tiefeng is 20 yuan / ton to Pingshui. In the second trading session, the die-casting alloy factory had poor orders this month and limited purchases into the market, and the decline in demand was difficult to support the market price, but due to the narrowing of the contract price gap between the futures month and the next month, the discount rate quoted by the holder was limited. Kirin, Mengzi, Huize and Tiefeng offer 10-20 yuan per ton for the May contract. Qilin, Mengzi, Huize, Tiefeng mainstream transaction in 15660-15750 yuan / ton.

The mainstream transaction in Ningbo was 15800-15880 yuan / ton, the ordinary brand raised the water by 120-150 yuan / ton to the 2005 contract, and the price difference between Ningbo and Shanghai ordinary brand was maintained at about 40 yuan / ton. Today, traders actively ship the goods, the quotation is more uniform, the morning holder reported Tiefeng, Hualian, West Mine and other brands in the 05 contract to raise water 120 yuan / ton, Yongchang also reported in the 05 contract rose 120 yuan / ton, will be reported in the May contract rose 150 yuan / ton. In the first period, the market transaction atmosphere is better, the downstream inquiry willingness has been enhanced, enter the second period, the disk slightly lower, downstream market inquiry willingness to buy again improved. Generally speaking, the transaction of high-priced brands is weak today, and the transaction of most ordinary brands is better.