SMM4, March 3: the morning commodity market mentality is good, non-ferrous metals generally rose, Shanghai copper Shanghai aluminum Shanghai zinc rose more than 1%. The Ministry of Finance said today that it had issued a partial new special bond quota of 1.29 trillion yuan in 2020 ahead of schedule. In accordance with the arrangements of the executive meeting of the State Council, all the new special bonds issued by various localities are used for railway, rail transit and other transportation infrastructure, ecological and environmental protection and other infrastructure, and actively promote social capital. Aluminum, according to SMM understand that in April Weiqiao reduced the basic purchase price of pre-baked anode to about 2660 yuan / ton (spot exchange), a reduction of 170 yuan / ton. Other electrolytic aluminum manufacturers will be highly likely to reduce the anode purchase price. At present, the adverse impact of the demand side still puts pressure on the commercial prebaked anode profit, and the anode price still has a downward trend in the later stage. "[SMM analysis] there is still a downward trend in nickel in the later stages of the price reduction of pre-baked anodes in April, and the Philippines has begun to suspend mining and production in the North Suriname region, but at the same time Indonesia has begun to call for a suspension of the previous export ban, so there is still considerable uncertainty on the supply side. Nickel prices will remain weak in the short term, but as the downstream picks up, the scope for nickel prices to continue to fall is limited.

Black iron ore steel rose more than 1 per cent. National thread stocks totaled 18.5483 million tons this week, a month-on-month ratio of-5 percent, according to SMM data. The inventory in the plant is 5.8042 million tons, 437500 tons lower than the previous month, and-7.0 percent lower than the previous month. Social inventory 12.7441 million tons, a month-on-month reduction of 533800 tons (- 4%) inventory continued to decline, thread production rose, in the scrap and other raw material prices down, the steel mill production enthusiasm or further improved. At the same time, it shows that the downstream demand in the policy resumption of production under the benign progress, and even stronger than previously expected.

Crude oil rose 3.87% in the previous period. The spread of US spot crude oil fluctuated on Thursday, with the US government planning to lease space for strategic oil reserves and try to mediate a cut in production between Saudi Arabia and Russia. Us President Donald Trump says he brokered an agreement between Saudi Arabia and Russia to cut production, but did not say how to implement it. Mr Trump said Saudi Arabia and Russia could cut production by 10 million-15 million barrels a day, an unprecedented 10-15 per cent of global supply, which could require the involvement of oil producers other than the Organisation of the Petroleum Exporting countries (OPEC) and its allies. However, both Russia and Saudi Arabia later denied this claim, and confidence in the crude oil market was frustrated. 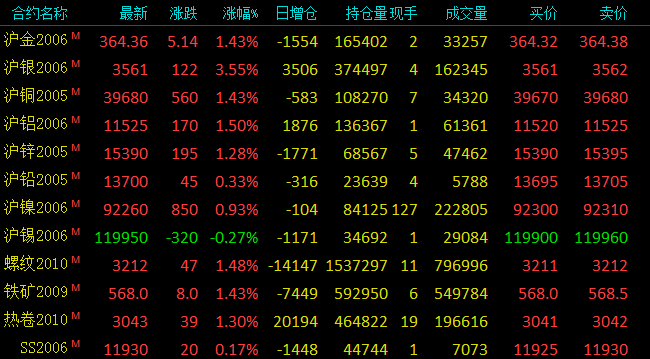 Copper: today, Guangdong electrolytic copper spot on the current month contract up 120% 130, wet copper 60 ~ 70%. The average price of electrolytic copper rose 700yuan / ton to 39695 yuan / ton, and the average price of wet copper rose 705yuan / ton to 39635 yuan / ton. In the spot market, although the price of copper is high, but the holder still insists on high water delivery, the price of flat copper in early trading is 120 yuan / ton; however, near Qingming Festival short holiday today, the desire to continue replenishing downstream is not high, coupled with the reluctance of some holders to hoard goods for the holidays, the price has been greatly reduced in the second quarter, and Pingshui copper has been reduced to 100 yuan / ton. In addition, the good copper supply is very adequate trading price fell 10 yuan / ton compared with yesterday, on the contrary, wet copper supply is tight and the price is lower, welcomed by the market, the price remains at 60 yuan / ton. Overall, near short holiday, the market trading enthusiasm declined, rising water within the day high open low walk.

The mainstream transaction of Guangdong zinc was 15370-15440 yuan / ton, and the quotation focused on 10-60 yuan / ton of Shanghai zinc 2005 contract. The discount of 80 yuan / ton in Guangdong stock market was 30 yuan less than that of the previous trading day. In the first trading period, individual cardholders bid higher in the water trial quotation stage, but there was no deal in the high water market, some of the cardholders quoted loosely, and a small number of transactions were completed in the market. Kirin, Mengzi, Huize and Tiefeng quoted prices for the Shanghai zinc May contract by 30-60 yuan / ton. In the second trading session, futures prices fluctuated near recent highs, insufficient procurement demand downstream, and the willingness of traders to receive goods was also limited. in order to realize the realization of shipments, the holders continued to lower the prices for shipment, and the rising water fell back more obviously. most of the market transactions are contributed by traders. Kirin, Mengzi, Huize and Tiefeng quoted 10-20 yuan per ton for the May contract. Qilin, Mengzi, Huize, Tiefeng mainstream transaction in 15370-15440 yuan / ton.

The mainstream transaction of zinc ingots in Tianjin market was 15500-17050 yuan / ton, and that of ordinary brands was 15500-15570 yuan / ton. The contract for 2004 rose from 60 yuan / ton to 100 yuan / ton. Compared with Shanghai stock market, Tianjin kept rising from 10 yuan / ton to 30 yuan / ton. Today, the Shanghai zinc low shock upward, the spot market to maintain the discount quotation, the quotation is more unified, the ordinary brand red Ye lark reported in the 04 contract to rise the water 80 yuan / ton near, Chi Hong reported in the 04 contract to rise the water 60 yuan / ton near, the high price brand Zijin to the April contract reported 100 yuan / ton near. Today, traders maintain a discount quotation, some traders still have hoarding gambling tax reform expectations, superimposed smelters due to the long delivery of long orders at the beginning of the month led to less circulation of goods in the market, the downstream side, is gradually recovering, there are still some downstream enterprise staff are in a state of isolation, at present, just need to purchase. On the whole, the transaction today is flat compared with yesterday. The transaction of zinc ingot is near 15450-15520 yuan / ton. Updating.