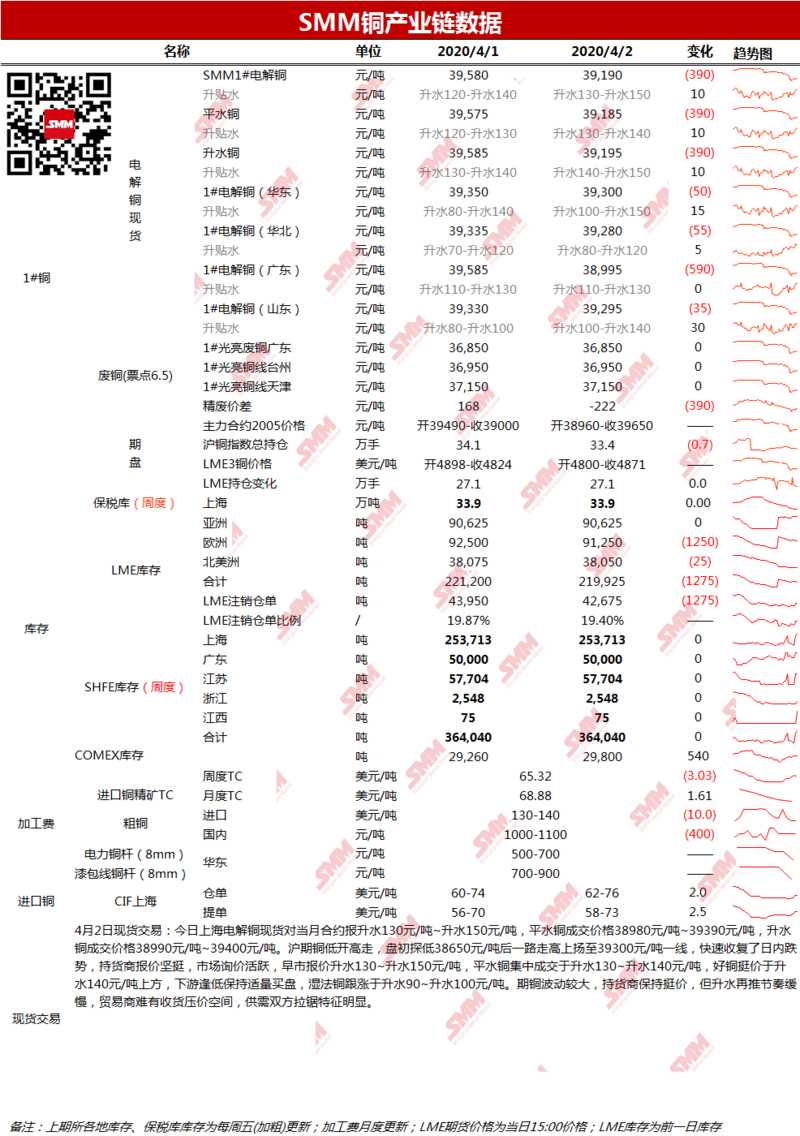 [4. 3 SMM Bronze Morning meeting Summary] Macro aspect: 1) the latest statistics released by Johns Hopkins University (JHU) in the United States show that as of 9: 10 Beijing time on the 3rd, the number of confirmed cases of new crown pneumonia in the world has reached 1014673, 52983 cases have died, and 210000 people have recovered, making it indisputably the largest public health crisis in the world today. [bearish] 2) as of March 28, the number of initial claims for unemployment benefits in the United States had actually been announced at 6.648 million, with an expected value of 3.7 million, double the previous value, which was revised from 328.3 to 3.31 million. [bearish] 3) Trump said Russia and Saudi Arabia would cut 10 million barrels or more of oil. Saudi Arabia called on the OPEC+ and other countries to hold an emergency meeting, and the OPEC+ should seek a fair agreement that would restore the necessary balance in the oil market. [good results] fundamentals: 1) the price difference between scrap copper and scrap yesterday was-222 yuan / ton, and the voting point was calculated at 6.5%. Copper prices have fluctuated sharply, and downstream manufacturers have seen an increase in wait-and-see sentiment. In addition, according to SMM, the Malaysian government's action control order was originally scheduled to close on March 31, but was extended to April 14. Local copper scrap disassembly manufacturers said they had not yet been able to start work, and exports remained stopped. [Lido] 2) imported copper suffered an import loss of about 200 yuan / ton yesterday. Transactions in the foreign trade market remained active. On the one hand, due to the expectation of tax cuts, some large households are buying warehouse receipts at high prices, leading to a rapid rise in warehouse receipt prices this week. In addition, at present, due to the delay of shipping, the supply of goods arriving at Hong Kong in mid-April was scarce, the demand for replenishment of long orders increased gradually in April, and the price of bills of lading also rose. At present, the trading enthusiasm in the foreign trade market is high, the quotation is still rising, and subsequent prices are still expected to continue to rise. [Lido] 3) stocks LME copper stocks fell by 1275 tons to 219925 tons on April 2, while copper warehouse receipt stocks in the previous period decreased by 7332 tons to 209082 tons. [neutral] 4) spot East China: in the spot aspect, due to the large fluctuation of copper futures at present, the holder maintains a high price, but the pace of rising water and pushing again is slow, it is difficult for traders to have room to accept goods and lower prices, and the characteristics of saws on both sides of the supply and demand sides are obvious. It is expected that the spot quotation will still show a stalemate today. Spot water 130-liter 150 yuan / ton. South China: Guangdong electrolytic copper spot contract rose 110% 130 to the same month yesterday. In the spot market, copper prices opened low and went high, and the purchase volume of downstream users increased significantly, but affected by the outflow of warehouse receipts, the rise in early trading was basically the same as yesterday. To the second trading session, Pingshui copper was sought after slightly upward quotation, but good copper due to supply over demand but down, the two prices are basically the same. In addition, wet copper is sought after by the market because of its low price. Overall, copper prices rebounded yesterday, and the market trading atmosphere was significantly better than the day before yesterday. Copper price and forecast: last night, Lun copper closed at $4881.5 / ton, up 1.66%, trading volume 15000 hands, short positions reduced 721 hands to 270000 hands. Copper prices rebounded last night as the US president said Saudi Arabia and Russia had communicated a sharp cut in production, sending intraday crude oil up 47 per cent to $27.39, driving copper prices to rebound. However, since then, both Russia and Saudi Arabia have dismissed rumors that oil prices have recovered some of their gains within the day, and the development of the epidemic is still driving risk aversion after the number of first-time US jobless claims hit an all-time high last week. Yesterday, the dollar soared back above the 100 mark, and gold rose more than $20, so there were some disadvantages to copper prices. It is estimated that today's copper 4740-4800 U. S. dollars / ton, Shanghai Copper 39300-39800 yuan / ton.