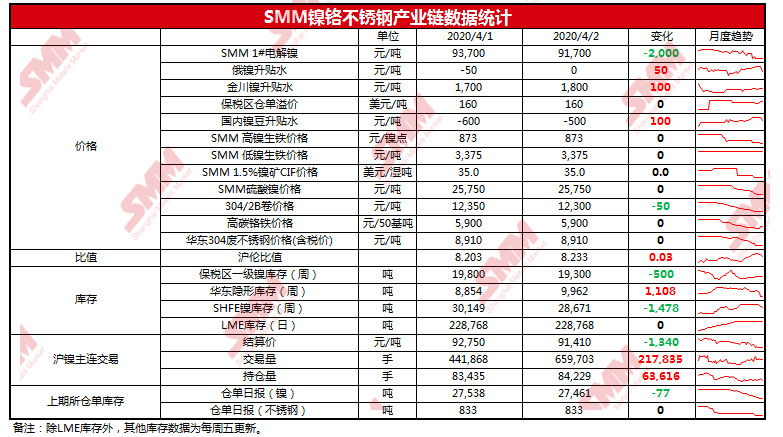 Nickel spot: April 2 SMM1 electrolytic nickel quotation 90400-93000 yuan / ton. As the number of confirmed cases in the United States reached 210000, and employment hit a 10-year low, the bearish macro factors once again hit the financial market, and the opening of the basic metals collective fell sharply, but the intraday crude oil prices boosted, the basic metals gradually stabilized and rebounded, and all the nickel in Shanghai fell during the recovery day in the afternoon. Today, Russian nickel to Shanghai nickel 2005 contract offer 50 yuan / ton to rise 50 yuan / ton, after the opening of the morning market, trading is particularly active, sticking water Russian nickel is gradually reduced, the mainstream market is mostly flat on the spot, some traders on the plate to rise to 2005 yuan / ton, high water transaction situation is relatively weak. Although trading weakened in the afternoon, the overall trading volume of Russian nickel still picked up significantly today. Jinchuan nickel, Shanghai nickel 2005 contract rose 1700-1900 yuan / ton, Gaoshengshui transaction is weak, due to the decline in early trading, the rising water 1700 yuan / ton transaction willingness is OK, as the disk turned positive, the trading atmosphere has also improved. Today, the ex-factory price of Jinchuan Company is 93000 yuan / ton, and only a small number of goods have arrived in Shanghai. Today's nickel bean Shanghai nickel 2005 contract offer of 500 yuan / tonne, today is still weak supply and demand. [bearish]

Stainless steel: on April 2, the average price of 304 cold rolled stainless steel in Wuxi area was slightly reduced by 50 yuan / ton, 304 2B rough edge coil price was quoted at 12150-12450 yuan / ton, and hot rolling was stable, 304 / NO. 1 5 feet was quoted at 1185012050 yuan / ton. The state-run 304 2B trimming volume is quoted at 13000-13400 yuan per ton. According to the reaction of traders, the transaction of 300 series hot rolling in March is fair, which is obviously better than that in February, and can almost reach the normal shipping level. The improvement of cold rolling is weaker than that of hot rolling. Near the Qingming Festival holiday, prices are expected to remain stable recently, this morning due to a larger drop in nickel prices, some traders 304 cold rolling quotation slightly reduced by 50 yuan / ton. For 10:30 SHFE SS2006 contract price 11950 yuan / ton, Wuxi stainless steel spot water 370-670 yuan / ton. [bearish]

On the afternoon of April 2, the latest sales guide price of Qingshan Dingxin 304 hot rolled narrow strip was quoted to 11700 yuan / ton, down 100 yuan / ton from the last price of the steel mill.

Nickel price judgment: because the macro environment is still in the negative and turbulent, downstream consumption is also affected by the epidemic, the metal pressure is still serious, and because the problem of stainless steel accumulation can not be solved, stainless steel demand for nickel is difficult to further expand, suppress the overall consumption of nickel. It is expected that the nickel price will remain low in the short term, which is related to the macro news and the uncertainty of crude oil. From the technical index, we pay attention to the fluctuation of the center of gravity of the 5-day moving average and the 10-day moving average. In addition, we are concerned about the impact of tax reduction expectations on the contract structure.