SMM4, March 2: Guangdong zinc ingot storage volume increased significantly in March, year-on-year also improved, for the increase in inventory, we believe that the month-on-month data is in line with the laws of previous years, because the Spring Festival is mostly concentrated in January-February, the production disturbance is greater, the overall start in February is at a full-year low. 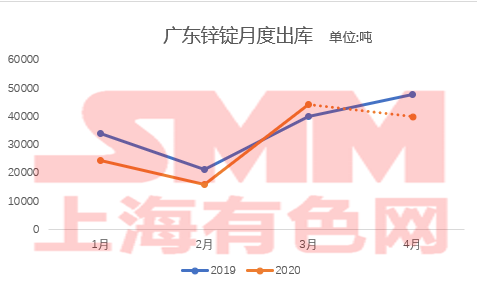 For the improvement of storage volume compared with the same period last year, we think it can not be simply defined as that this year's downstream orders are better than last year, for the following reasons: the price difference of zinc ingots is obvious, the price of zinc ingots in March last year is mainly between 21000 and 22600 yuan / ton, the overall price is high, and the willingness to stock downstream is low, so the inventory level of raw materials zinc ingots in the factory area is limited, and the production is basically based on the downstream order quantity, so from a comprehensive point of view, Last year's outbound data can more directly reflect the order situation of the terminal. In March this year, zinc prices fluctuated sharply from 16300 yuan / ton, with a difference of 2000 yuan / ton between high and low prices. The lower reaches basically began to supplement inventory from 16000 yuan one after another, and after the price fell below 14500 yuan, in addition to starting to amplify the purchase volume downstream, the terminal also carried out a large number of replenishment when the price fell, so the better export level in March includes the demand for replenishment in addition to the normal production demand.

In April, we are pessimistic about the terminal consumption of zinc in Guangdong, which is mainly related to the consumption structure of the lower reaches of zinc in Guangdong. The consumption of die-cast zinc alloy in Guangdong accounts for more than 60% of the consumption of die-cast zinc alloy. In addition to domestic sales, the downstream consumption of die-casting zinc alloy, such as daily hardware, automobile hardware accessories, locks, sanitary ware, toys, zippers and electronic products, is also closely related to export. The main export places are the United States, Japan, Germany, the United Kingdom, Russia, South Korea, Australia, India, Canada and other countries. The current overseas epidemic situation has spread, and after the completion of some of the original orders, new orders have begun to be reflected by the decline in external demand. We understand that overseas customers have postponed or cancelled orders, and terminal compression output has also been put on the agenda. This will also affect subsequent alloy consumption, individual alloy factories are pessimistic, demand is expected to decline by half, and some alloy factories say that there are no plans to reduce production for the time being. Therefore, to sum up, the decline in terminal demand in Guangdong in April will be a drag on the export volume of zinc ingots in the Guangdong market, but in the near future, customers in Fujian, Wenzhou, Hunan and other places have inquired to buy Guangdong goods, to a certain extent, it will lead to the export volume of Guangdong. In addition, the downturn in prices will stimulate downstream replenishment demand, which will also make up for some of the decline in terminal demand.