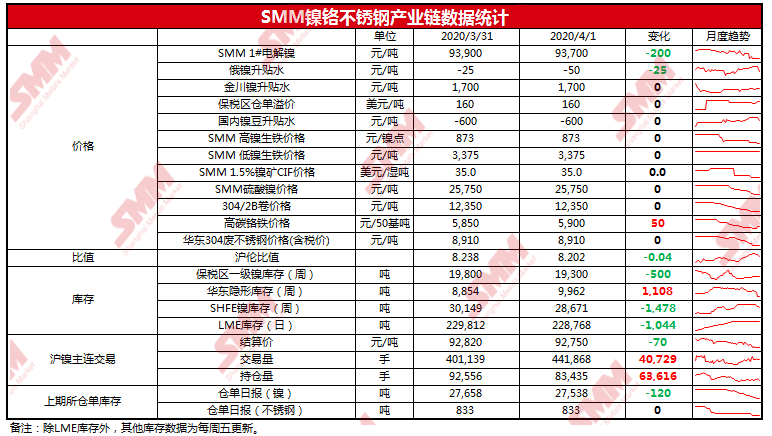 Macroscopically: us ADP employment in March was reported yesterday at-27000 in real terms, the lowest level since January 2010, but better than expected at-150000. [bearish] US Market manufacturing PMI48.5,ISM manufacturing PMI49.1, activity shrank less than expected in March, but the interference caused by the new crown epidemic pushed the sub-index of new manufacturing orders to an 11-year low, strengthening economists' view that the economy has fallen into recession. [bearish inflation] affected by the epidemic, Italy's manufacturing PMI in March fell to the lowest level since April 2009; France's PMI fell to a seven-year low in March; eurozone PMI fell to a new low of 07:30. [bearish] as OPEC and non-OPEC oil producers fail to reach a consensus, these countries will no longer be subject to production caps or production cuts from April 1. Saudi Arabia and Russia subsequently announced that they would supply large quantities of oil to the market in April. The Central Bank of China announced that in order to meet the temporary liquidity needs of financial institutions, the standing lending facility (SLF) operation to financial institutions in March totaled 30.63 billion yuan, down from 36 billion yuan last month, all of which were one-month varieties. The balance of standing lending facilities at the end of the period was 30.63 billion yuan. According to the Ministry of Finance, the new local government bonds in the first quarter completed 83.5% of the quota issued in advance. Next, the Ministry of Finance will speed up the decision-making and deployment of the issuance and use of special local government bonds, and make every effort to ensure the smooth and smooth issuance of local bonds. In order to help auto companies hit hard by the new crown epidemic to resume sales, China is considering temporarily relaxing quotas set to promote the production of electric vehicles. Chinese policy makers may also postpone the implementation of the "National six" emission standards for six months to help the automobile industry. Chinese car sales fell sharply by 79% in February and are expected to decline by about 10% in the first half of this year. [Lido]

Nickel spot: April 1 SMM1# electrolytic nickel quotation 92700-94700 yuan / ton, nickel price wide shock, downstream bargain a small amount of buying, the market trading has not significantly improved, the trading situation of each trader is also good or bad. Russian nickel to Shanghai nickel 2005 contract to apply for 100 yuan / ton to flat water, flat water supply transaction is general, the market has the new version of Russian nickel spot report 100 yuan / ton transaction is still OK, considering the expectation of tax reduction, there is a flow between traders to fill the warehouse, downstream demand is still just need for small purchase. Jinchuan Nickel to Shanghai Nickel 05 contract rose 1600-1800 yuan / ton, the transaction did not warm up due to the correction of rising water. Jinchuan company ex-factory price held steady at 94500 yuan / ton for the third day in a row, Shanghai area is still relatively small, Jinchuan No. 1 nickel water is expected to continue to maintain. It is reported that manufacturers have adjusted the prices of Jinchuan No. 2 and No. 3 nickel by about 500 yuan / ton, which is somewhat narrower than that of Russian nickel prices, and will have a certain impact on the enthusiasm of traders in receiving goods, and other similar brands of nickel plates may have more shipping opportunities. [neutral]

Nickel pig iron: on April 1, the price of SMM high nickel pig iron was quoted at 865880 yuan / nickel point (ex-factory including tax), which was the same as that of the previous trading day. Nife market is in a stalemate, buyers and sellers of psychological price differences, the market is difficult to close, some manufacturers said that the late signing of the order suspended. [neutral]

Stainless steel: on April 1, the quotation of stainless steel in Wuxi area is generally stable. The private 3042B rough edge roll price is 12200-12500 yuan / ton, and 304 / NO. 1 five feet is 1185012050 yuan / ton. The state-run 304 2B trimming volume is quoted at 13000-13400 yuan per ton. Stainless steel prices fell sharply in March and are now in a lower position, with little volatility in the near future. Due to the impact of the epidemic, downstream demand has not yet improved significantly. Some traders said that the probability of April is similar to that of March, shipment is dominant, downstream is still on-demand procurement. For 10:30 SHFE SS2006 contract price 12010 yuan / ton, Wuxi stainless steel spot water 360-660 yuan / ton. (spot trimming = rough edges + 170 yuan / ton) [neutral]

Nickel price judgment: SMM expects nickel prices to continue to be weak and volatile this week, but at present, the market generally believes that the decline in nickel prices is dominated by macro-dominant, there are technical repair opportunities, waiting for high layout short-term or short-term trading, Lunni 1080012000 US dollars / ton, Shanghai Nickel 9000098000 yuan / ton.