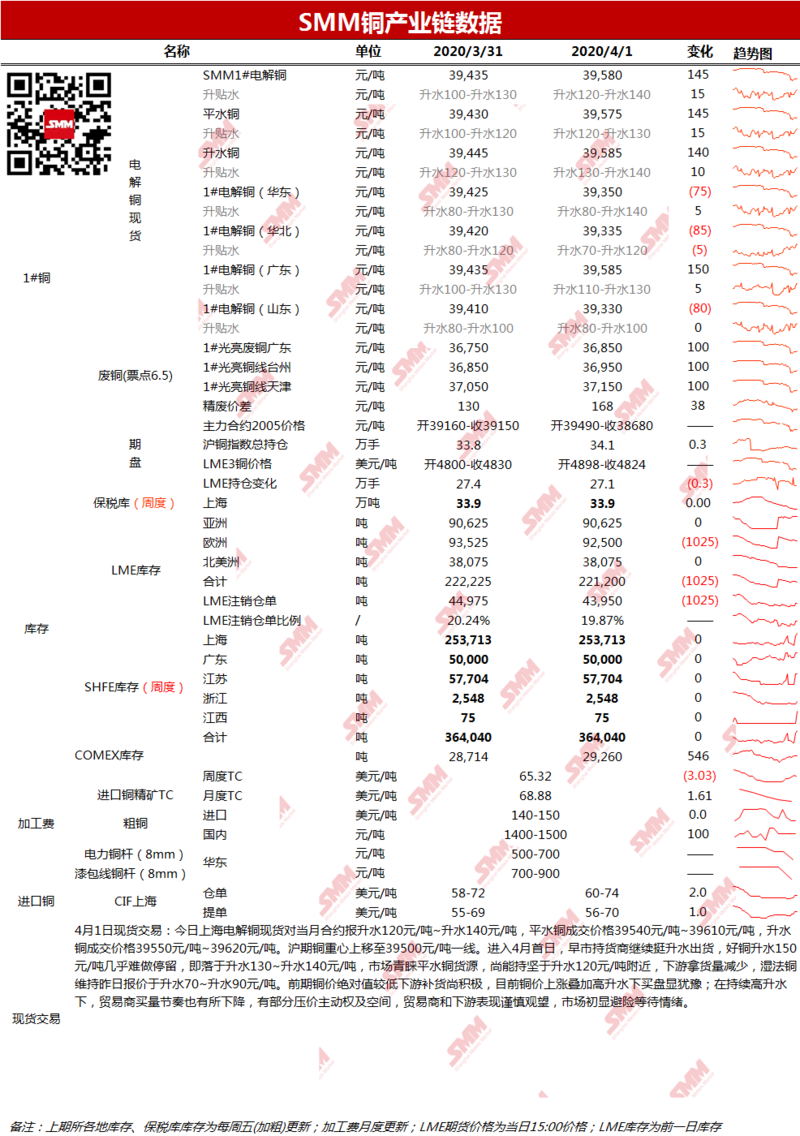 [4. 2 SMM Bronze Morning meeting minutes] Macro aspect: 1) US March ADP employment was announced yesterday, the real value was-27000, the lowest level since January 2010, but better than the expected value of-150000. [bearish] 2) Europe and the United States have announced manufacturing PMI one after another. As a result of the outbreak, Italian manufacturing PMI fell in March to its lowest level since April 2009; France's March PMI fell to a seven-year low; and eurozone PMI fell to a new low of 07:30. [bearish] 3) as a result of the failure of OPEC and non-OPEC oil-producing countries to reach a consensus, these countries will no longer be subject to production caps or production cuts from 1 April onwards. Saudi Arabia and Russia subsequently announced that they would supply large quantities of oil to the market in April. [bearish]

Fundamentals: 1) Copper concentrate Indonesia has issued a new batch of 1.07 million tons of copper concentrate export licenses to Freeport Indonesia, valid from March 16 this year to March 15, 2021, according to an official of Indonesia's Ministry of Energy. Indonesia approved an export quota of 198000 tons in March last year, which rose to 700000 tons in July. [bearish] 2) the price difference between scrap copper and scrap copper yesterday was 168 yuan / ton, and the voting point was 6.5%. Copper prices rise first and then fall, affecting market confidence. Traders have a long and short mood in the future. Businesses with insufficient confidence can ship goods without excess. At the same time, the overseas epidemic is affecting the production of some factories, causing a certain impact on new sources of waste, and the supply of waste is much smaller than in normal times. [Lido] 3) the import loss of imported copper was about 250 yuan / ton yesterday. Yesterday the warehouse receipt market performance is very active, the market inquiry is positive. The price of warehouse receipts has been raised again today, boosted by market demand for purchases. Although the market inquiry is active, but because the price rises too fast, the actual transaction is more deadlocked. It is understood that the rising price of warehouse receipts is mainly due to the high price of a large customer in the market, for other buyers in the market, the current high price acceptance is not high. The price of incoming bills of lading remained strong in April, and prices rose slightly with warehouse receipts as market sentiment improved. [Lido] 4) stocks LME copper stocks fell by 1025 tons to 221200 tons on April 1, while copper warehouse receipt stocks in the previous period decreased by 6974 tons to 216414 tons. [neutral] 5) spot East China: in the spot aspect, at present, the lower reaches are hesitant to buy under the superposition of copper prices, and in the early stage, the pace of buying by traders has also dropped, and there is some initiative and space to press prices. Traders and downstream performance carefully wait and see, so it is expected that today's spot quotation is also difficult to continue to lift the space. Spot water 110-water 140 yuan / ton. South China: Guangdong electrolytic copper spot contract rose 110% 130 to the same month yesterday. Guangdong spot market continued to rise and fall the day before yesterday, early trading traders have offered shipments, but the consignee is very limited, prices down only after the transaction has improved. In addition, it is worth noting that, stimulated by rising water to maintain a high level, many businesses with warehouse receipts took the initiative to ship goods yesterday, resulting in a significant increase in market supply compared with yesterday. Overall, shipments increased significantly yesterday, but the enthusiasm for receiving goods is not high, the overall transaction is general.

Copper price and forecast: last night, Lun copper closed at $4804.5 / ton, down 2.55%, trading volume 15000 hands, long position reduction 2767 to 271000 hands. Copper prices continued to fall last night, basically recovering from the previous day's gains, back to the $4800 / ton near the operating platform. Last night, copper prices fell mainly due to the development of the epidemic and manufacturing data to promote risk aversion. The final value of Markit manufacturing PMI and ISM manufacturing PMI released in March in the United States were both below the 50 rise and fall line. The PMI data in the euro zone also performed poorly. Major assets such as US stocks and crude oil fell sharply, and copper prices also came under pressure. Recently, Shanghai copper and Lun copper positions have continued to decline, price volatility has weakened, copper prices are expected to hold steady below 4800 today, a slight correction in the macro adverse mood. It is expected to enter Lun copper 4740-4800 US dollars / ton, Shanghai copper 38500-39000 yuan / ton.