SMM4 January 1: this afternoon non-ferrous metals generally reversed, most of the decline only Shanghai tin rose 1.17%. Shanghai lead today high open low go, short-term recycled lead supply is still short, low-price waste battery procurement is still not smooth, but in the long run, recycled lead raw material supply problem is not big, has some output, but the pace is slow, it is expected that in the raw material improvement and profit stimulation, the supply recovery will be faster than the demand recovery, recycled lead post-natal supply improvement has a lot of room. Shanghai copper fell in the afternoon as the Indonesian Ministry of Energy said Indonesia had issued a new batch of 1.07 million tons of copper concentrate export licenses to Freeport Indonesian companies. Freeport Indonesia is the operator of the world's second largest copper mine. Department of Energy officials say the license is valid from March 16 to March 15, 2021. In addition, Indonesia issued a license for the export of 373626 tons of copper concentrate to PT Amman Mineral Nusa Tenggara for a period of one year.

All the black series green iron ore steel fell by more than 2%. The decline in export orders caused by the epidemic abroad in April will gradually begin to emerge, with sales of domestic household appliances and cars falling sharply. Even though most of them stimulate consumption through subsidies such as the issuance of consumption vouchers, the effect is limited. To reverse the decline in car sales. Iron ore short-term port inventory is low and shipments do not increase significantly, at the same time, supported by thread production demand is relatively strong, but later also pay attention to the epidemic and downstream demand recovery.

Crude oil fell 0.68% in the previous period. International crude oil prices fell further on Wednesday, following the biggest quarterly and monthly declines in history. The data showed that US crude oil inventories grew faster than expected, while divisions within the Organization of the Petroleum Exporting countries (OPEC) (OPEC) widened, raising fears of a supply glut. Oil prices are now close to their lowest level since 2002, and the new coronavirus crisis has led to a slowdown in the global economy and weakened oil demand. Crude oil futures fell by nearly 70% in the first quarter of the month, the biggest drop in history. Brent crude oil futures refreshed its low since May 2003 to $25.16 a barrel, extending its intraday decline to 4.52 per cent. 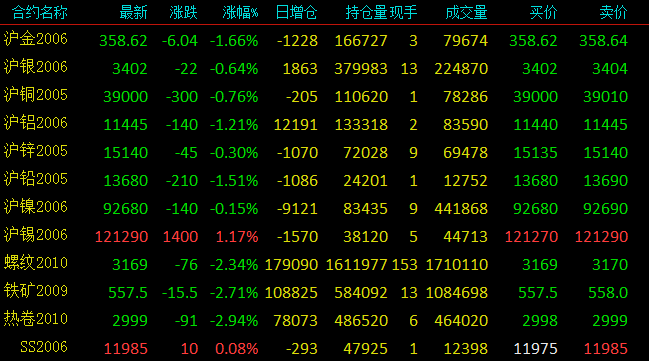 In terms of capital flow, funds in the commodity market frenzied into the black system, the black chain index attracted 2.121 billion funds to enter the market, coke, threads and iron ore became major gold absorbers, agricultural products were continuously callback to cause a large number of funds to flee, and 581 million funds flowed out of soybean meal, while crude oil, chemical and non-ferrous metal plates all had a small amount of capital outflow.

Copper: today, the Shanghai copper main contract 2005 opened at 39540 yuan / ton in the morning, and then rose slightly to the highest point of 39570 yuan / ton, then the center of gravity fell slightly and fluctuated narrowly around 39400 yuan / ton. in the afternoon, the opening copper price was affected by the decline in crude oil, changed the trend of maintaining stability in the morning, quickly fell below the 39000 yuan / ton mark, and fell to the lowest point of 38860 yuan / ton. the tail rebounded slightly and the center of gravity stood at the 39000 yuan / ton level. Shanghai copper main daily position reduction of 205 hands, to 111000 hands, mainly for the long reduction; trading volume increased by 2794 hands, to 78000 hands. At present, the overall position of the Shanghai copper contract has moved backward. The daily position of the Shanghai copper 2006 contract has increased by 5087 hands to 99000 hands, mainly by short positions, and the trading volume has increased by 16000 hands to 61000 hands. The Shanghai copper index increased its daily position by 3228 hands to 341000 hands, mainly by short positions, and trading volume increased by 34000 hands to 196000 hands. During the day, Shanghai copper continued to decline as a whole, especially in the afternoon. The main reason was that API crude oil stocks rose sharply to 10.5 million barrels early this morning, saying that crude oil may face a huge demand crisis. Oil fields in many places have stopped production one after another. At the same time, there is still no sign of easing in the price war between Saudi Arabia and Russia. As a result, oil prices continue to fall, and copper prices continue to decline under the influence of linkage. At the same time, the global epidemic in Asia is currently in good control, but the continued surge in the epidemic in the United States has aroused market concern, and nearly 190000 of the confirmed cases have been confirmed, triggering market concern about the US economy, and it is difficult to boost copper prices macroscopically. At present, Shanghai copper is still under pressure at the top, and the MACD red column is still short, indicating that the kinetic energy of the bulls is still insufficient. Before the epidemic situation in Europe and the United States has not improved significantly, it is expected that Shanghai copper will not be able to break through the 40000 yuan / ton mark in the short term.