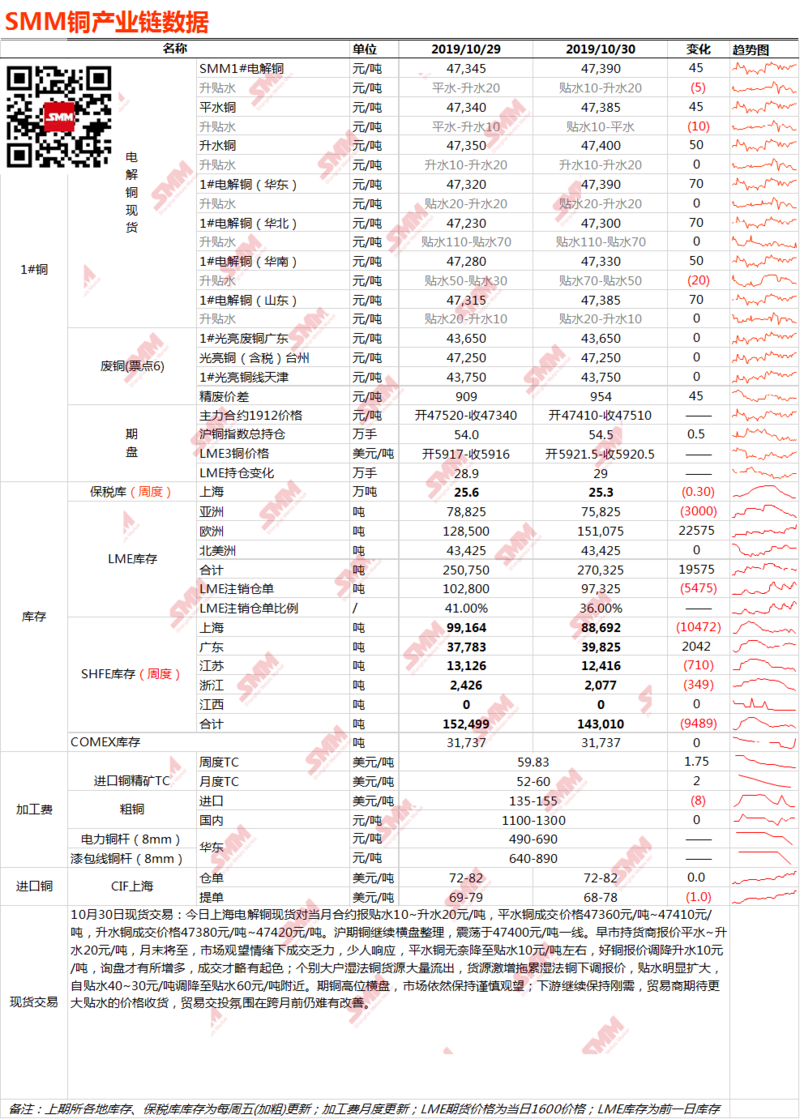 [10.31 SMM Bronze Morning meeting] Macro aspect: 1) the Federal Reserve announced a rate cut of 25 basis points, cutting the benchmark interest rate range to 1.50%-1.75%, the third rate cut this year, in line with market expectations. The Fed also hinted that easing measures could be close to a halt. In its policy statement, the Fed deleted the phrase that policymakers would "take appropriate action" to maintain economic expansion. 2) the actual GDP in the United States rose 1.9% in the third quarter from the previous quarter, significantly higher than the expected 1.6%; the initial value of the GDP deflator in the third quarter was 1.7%, lower than expected and the previous value; the PCE price index in the United States increased by 1.5% in the third quarter, lower than expected and the previous value; the number of new ADP jobs in the United States in October was 125000, higher than expected and the previous value. 3) in the United States, EIA crude oil stocks rose 5.702 million barrels in the week to October 25, and the unexpected increase in EIA crude oil stocks led to a short-term drop of $0.50 per barrel. Fundamentals: 1) Copper concentrate: the Peruvian government has approved the construction of the Tia Maria copper mine project. Southern Copper said it hoped the project would be completed by 2020, and once completed, the mine is expected to produce an average of 120000 tons of copper a year over an estimated 20 years of service life. 2) scrap copper: the price difference of fine scrap yesterday was 954 yuan / ton. Fine waste price spread continues to be low, it is difficult to boost scrap copper consumption, the market transaction is extremely light. Tight supply remains tight, but the market is even more worried about tight demand. The tight import of copper scrap has become a fact, and the policy on waste import in Southeast Asia has become more stringent. Enterprises that have previously moved factories to Southeast Asia or are expected to transfer may have some impact. 3) Import of copper: there was a loss of about 400 yuan / ton on imports yesterday. Yesterday, the foreign trade market maintained a stalemate, the current offer lack of counter-offer, demand is completely light. Because of the large import losses, even if the holders continue to cut prices slightly, it will not stimulate buying. At present, the willingness to ship the bill of lading to Hong Kong in the middle and late November is not strong enough, the price has not been greatly adjusted, and there are few transactions. 4) inventory: LME copper stocks increased by 19575 tons to 270325 tons on October 30, and copper warehouse receipt stocks increased by 1 ton to 62259 tons. 5) spot: in the spot aspect, due to the recent increase in the supply of goods in circulation in the market, the pressure on the holders to sell the goods is greater, but due to entering the end of the month, the market buying mood is light, and the market transactions continue to stalemate. It is estimated that today's spot discount of 20-liters of water 20 yuan / ton. Copper prices and forecasts: copper prices fell in the internal and external markets last night, mainly due to EIA's announcement of an unexpected increase in crude oil stocks by 5.702 million barrels, refined oil stocks fell less than expected, after the release of the data, American oil fell by $0.50 / barrel in the short term, and the decline in crude oil prices linked to copper prices. Macroscopically, eurozone economic indicators released yesterday performed poorly, with the initial real US GDP quarterly rate significantly better than expected, and the Fed's hawkish decision to cut interest rates, the dollar is likely to turn strong in the short term, putting pressure on copper prices. At present, Shanghai copper closed negative, the opening of KDJ index narrowed, indicating that the upward force of copper price weakened. Copper prices are expected to fall slightly today. It is estimated that today's copper 5860-5920 U. S. dollars / ton, Shanghai Copper 47200-47600 yuan / ton.