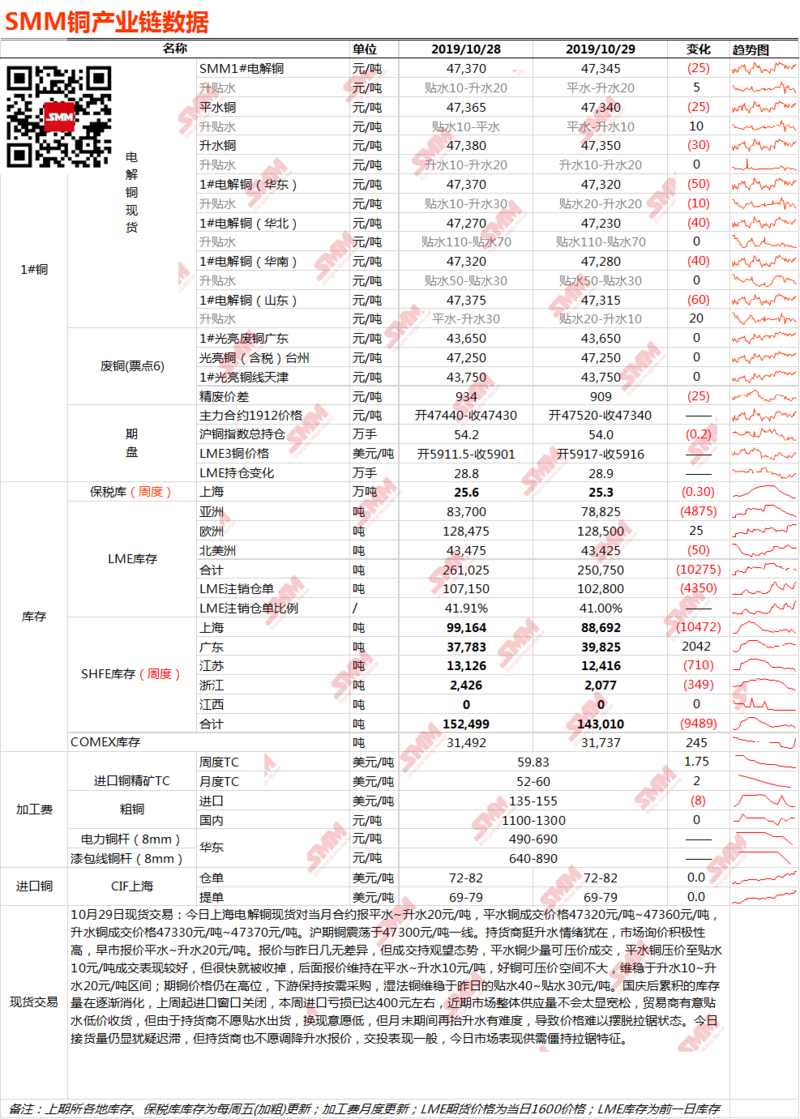 [10.30 SMM Bronze Morning meeting minutes] Macro aspect: 1) the British Parliament approved the holding of an early general election on 12 December. Colbin, leader of the British Labour Party, said that after the European Union agreed to extend the Brexit deadline to January 31, 2020, its conditions for "excluding the unagreed Brexit option" had been met. Labour will support the government's motion for an early general election in December. 2) after the September quarterly survey, the index of contract sales of existing homes increased by 1.5%, higher than expected and the previous value, while the consumer confidence index of the American Chamber of Commerce in October was 125.9, which was lower than expected and the previous value. 3) API crude oil stocks in the United States rose 592000 barrels in the week to October 25, lower than expected, and the previous value of 4.45 million barrels. Fundamentals: 1) Copper concentrate: the Chilean Port Workers' Union announced that Chile's main port dock would be shut down for two days from October 29 to 30 because of workers joining the protests. In addition, the Escondida Copper Mine Union said it would strike for half a day on October 29 in support of the protests. 2) scrap copper: the price difference of fine scrap yesterday was 909 yuan / ton. The overall performance of the macro news side is good, but on the eve of the Fed interest rate discussion, the market futures trading and spot trading are cautious. Gold, silver and silver 10 is coming to an end, consumption is about to enter the off-season, for scrap copper and electrolytic copper support as a whole weak, although due to the scrap six types of restrictions on imports lead to tight supply of scrap copper, but the demand side is weak, the overall performance of scrap copper supply and demand are weak. 3) Import of copper: there was a loss of about 400 yuan / ton on imports yesterday. Foreign trade copper has all turned to the buyer's market, light demand dominates the trading atmosphere of the foreign trade market. The market is dominated by shipments, traders quotation continues to decline, however, there is still no counter-offer, the market price is not market, there are few transactions. After the middle of November, the quotation of the bill of lading to Hong Kong is temporarily stable, and when there is no transaction, we choose to wait and wait, and the mood of selling the bill of lading is strong in the near future. Due to the lack of buying in the market, the transaction is too light and the price is stable for the time being. 4) inventory: LME copper stocks were reduced by 4900 tons to 250750 tons on October 29, while copper warehouse receipt stocks in the previous period increased by 100 tons to 62258 tons. 5) spot: on the spot side, due to the recent situation of receiving goods at low prices in the market, the holders took the opportunity to pull prices, and there was no greater willingness to sell at the end of the month, so there was a stalemate in the market. It is expected that the spot price will rise by 10 yuan per ton of copper today and forecast that the copper price will remain high in the internal and external markets last night, mainly due to the market expectation that the US dollar index will remain weak under the circumstances of the Fed interest rate cut. And recently the macro good news is more, the market risk aversion mood weakens, last night the dollar index and the CMX gold price both fall downwards, supports the copper price to maintain the high position. At present, on the macro side, the British Parliament has approved the holding of an early general election in December. The Chinese side says trade negotiations are continuing and some progress has been made. The US existing home signing sales index rose 1.5% month-on-month in September, which is good for copper prices. In addition, yesterday the Chilean side also sent out the message of strike, supply side disturbance also formed a certain support for copper prices. At present, Shanghai copper close Yang, below get 5-day moving average support, MACD index Hongzhu magnified, is expected to maintain a high copper price today, Lun copper 5890-5950 US dollars / ton, Shanghai copper 47300-47700 yuan / ton.