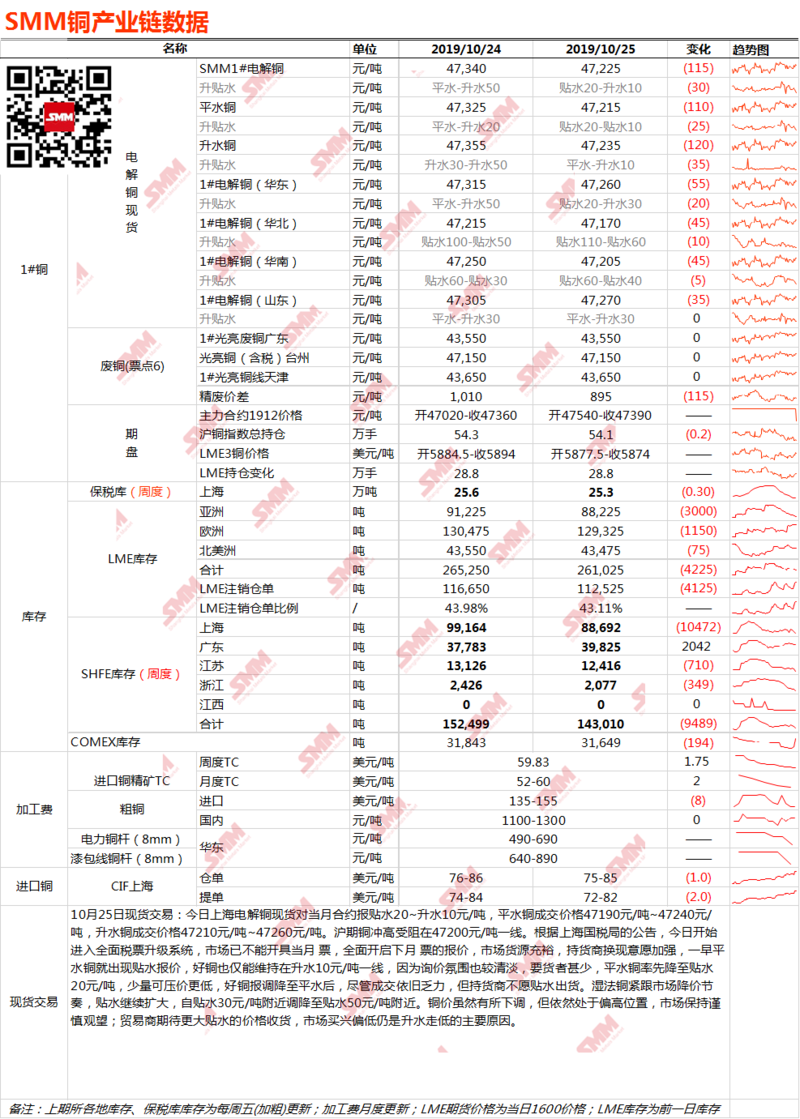 [10.28 SMM Bronze Morning meeting Summary] Macro aspect: 1) the European Union has agreed in principle to postpone Britain's Brexit, but the final date has not yet been set. 2) Bureau of Statistics: in the first three quarters of 2019, the total profits of industrial enterprises above the national scale decreased by 2.1% compared with the same period last year, including 3.3% in the first quarter, 1.9% in the second quarter, and 1.8% in the third quarter. Industrial profits fell 5.3 per cent in September from a year earlier, an expansion from August, mainly due to wider factory prices and slower sales growth. 3) the University of Michigan Consumer confidence Index for October released a value of 95.5, expected 96, up from 96. Fundamentals: 1) Copper concentrate: as of Friday, the SMM copper concentrate index (weekly) was $59.83 / tonne, up $1.75 / tonne from the previous month, indicating that the fourth quarter Floor Price finalized by the CSPT team had a certain impact on spot transaction prices. Last week, in the first week after the release of Floor Price, there were more inquiries in the spot market for copper concentrates, and both sides were more cautious, especially the smelters were more willing to bid. The copper concentrate market closed well last week, mainly due to the need for some northern smelters to reserve goods in winter, providing a certain degree of liquidity for the spot market. 2) scrap copper: the average price difference between fine and waste last week was 947 yuan / ton, an increase of 201 yuan / ton over the previous month. Last week, copper prices rebounded, fine waste price spread slightly rebounded in the vicinity of 1000 yuan, but still below the reasonable price spread, there is still no advantage for scrap copper consumption, scrap copper consumption has not improved. 3) Import of copper: last week, the import loss showed a trend of expansion, from a loss of 100 yuan / ton at the beginning of the week to a loss of 400 yuan / ton on Friday. Due to the expansion of losses, the demand for customs declaration in the market was restrained, and foreign trade demand continued to be in a light state. During the week, the premium warehouse receipt of Yangshan copper was reduced from US $77-87 / ton to US $73-83 / ton, and the bill of lading was reduced from US $75-85 / ton to US $70-80 / ton. At the beginning of the week, the holder's strong willingness to bid did not see downward quotation, to Thursday, the loss is still expanding, the market sentiment is no longer, began to take the initiative to lower the offer to actively ship, the market quotation has been reduced in an all-round way. However, the low price still failed to attract the market to buy, a small number of counter-offers and offers between the price difference of more than $10 / ton, foreign trade transactions are still difficult, few transactions within the week, the market returned to light. 4) inventories: last week, LME copper stocks were down 7375 tons to 261025 tons from the previous month; previous copper stocks were down 9489 tons to 143010 tons from the previous month; and bonded area stocks were down 3000 tons to 253000 tons from the previous month. 5) spot: in the spot aspect, due to entering the end of the month, most of the enterprises begin the state of capital settlement, the expected performance of the overall market transaction is light, and the holder may be forced to lower the quotation under the pressure of inventory. It is estimated that today's spot discount of 30-liter water 20 yuan / ton. Copper prices and forecasts: copper prices continued to rise on Friday, mainly due to the recent unexpected decline in US crude oil stocks and the possible reduction in OPEC production, which continued to push up crude oil prices. Us oil rose 1 per cent on Friday, giving a clear boost to copper prices. At present, however, Britain's plans to leave the European Union at the end of the month have failed, with profits of industrial enterprises above the size of China falling 5.3 percent in September from a year earlier, larger than the drop in August, and recent economic data from the United States and Europe have also performed poorly, making market expectations for demand still weak. it is difficult to support copper prices to continue to rise. The Chilean riots, as the main driver of the rise in copper prices, have calmed down, and the actual production of its main copper producing areas in northern cities and towns has been limited, and the disturbance on the supply side has been basically digested on the disk. Copper prices are expected to fall slightly today. Today's copper is expected to be 58705920 US dollars / ton, Shanghai copper 4710047600 yuan / ton.