CST
translation
Source:SMM
After National Day, domestic and foreign trade prices have ended the steady rise in the past five months and began to decline, essentially still affected by weak demand. The price of Yangshan copper premium warehouse receipt fell from US $77-87 / ton to US $73-83 / ton, and the price of bill of lading dropped from US $75-85 / ton to US $70-80 / ton. The average discount price for domestic trade also fell from 95 yuan / ton at the beginning of the week to 5 yuan / ton.

Yangshan copper premium fell sharply for the first time in May this week, with warehouse receipt prices falling from $77-87 per ton to $73-83 per tonne and bill of lading prices from $75-85 per tonne to $7080 per tonne. The weekly average price fell by nearly $5 per tonne. Mainly due to the substantial expansion of import losses this week, curbing market buying demand, foreign trade market almost no transactions, quotation has dropped sharply. 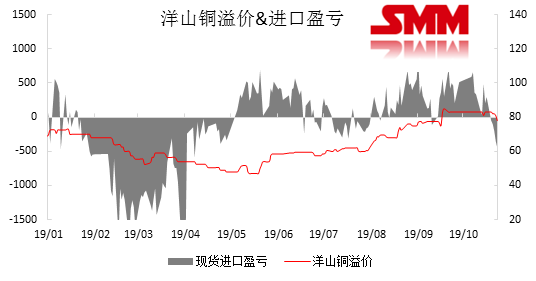 At the same time, the average price of domestic trade rose this week from 95 yuan / ton at the beginning of the week to 5 yuan / ton. Low market buying is still the main reason for the rise and decline. After National Day, domestic and foreign trade prices have ended the steady rise in the past five months and began to decline, essentially still affected by weak demand. Domestic production has maintained steady growth, at the same time, due to better import prices, import copper has also increased, consumption gradually entered the off-season state after National Day, domestic accumulation is obvious, domestic spot pressure increased in the fourth quarter, import price is also difficult to give too many opportunities to import copper.

This year's fundamentals are more affected by the supply side, and consumption excluding seasonal factors, most of the weak state, failed to give too much support to the fundamentals. From the performance of domestic inventory during the year, it is also easy to see that the domestic storage time is concentrated in the second quarter, corresponding to the centralized maintenance period of domestic smelters. This year, the performance of the warehouse is more caused by the disturbance of the supply side, feedback to the copper terminal consumption is not very good performance. After the supply returned to normal in the third quarter, the inventory performance was lower than last year, the domestic began to accumulate the stock slowly, the fourth quarter still has the phenomenon of accumulating the stock ahead of time.

In the fourth quarter, copper fundamentals are still hard to see the momentum of a rebound in copper prices. The interference at the copper concentrate end has not stopped, but the marginal impact on the copper price has gradually weakened, and the real shortage has not yet been transmitted to the electrolytic copper end; waste copper consumption continued to be weak during the year, but it has not been able to support refined copper consumption. After scrap copper consumption was greatly replaced by refined copper last year, the elasticity of continued extrusion by refined copper is very small, and scrap copper is difficult to become the dominant factor in copper fundamentals. Electrolytic copper supply continued to increase in the fourth quarter than in the fourth quarter, the consumer end of the off-season market is also more difficult to see more good, but may appear accumulative state, the domestic economic recovery also needs a more clear signal, copper prices are expected to continue to low shock in the fourth quarter.