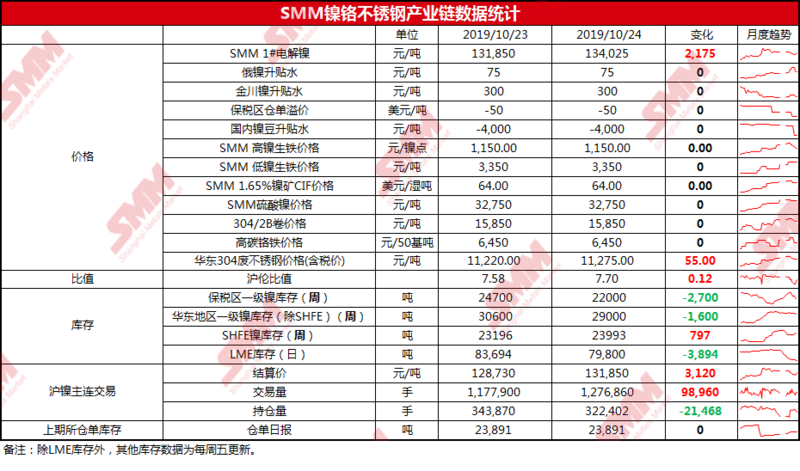 Macro: yesterday, the United States released the initial value of Markit manufacturing PMI in October 51.5, when the number of people claiming unemployment benefits at the beginning of the week, the data were better than expected; the European Central Bank said the main refinancing rate remained unchanged at 0%; Trump "bombarded" the Federal Reserve: cutting interest rates too slowly! Following the Fed's interest rate resolution next week, the market expects a high probability of a rate cut in the United States. On Thursday, the central bank launched a seven-day reverse buyback of 60 billion yuan, with a winning interest rate of 2.55 percent and a net investment of 60 billion yuan.

Nickel price judgment: the early Indonesian mining ban news caused by the increase has been partly returned, and the end of August news has been completely implemented after the increase has been basically all back, the recent price trend is mainly related to the long-short game around deliverables. The increase in Nife's return resources is a potential negative, but considering its replacement with pure nickel, it remains to be seen whether the overall fundamental situation will deteriorate significantly in the end. The majority of operators believe that the nickel price has not yet been completely reversed, in the short term we think it is still the mood and game pricing stage, the price is dominated by interval volatility.

Nickel spot: on October 24, Russian nickel compared with Shanghai nickel 1911 discount to 100 yuan / ton, Jinchuan nickel than Shanghai nickel 1911 contract generally increased by 200-300 yuan / ton. The rising water in Jinchuan of Russian nickel continues to decline, mainly due to the large price difference between Shanghai nickel and Wuxi nickel in the near future, which stimulates the steel mills to purchase nickel beans from Wuxi plate, and the demand for nickel plate is obviously restrained. Due to the price gap between the two cities is still large, this phenomenon is expected to continue in the near future, mainstream traders are quoted nickel in Shanghai, Shanghai spot market trading is very light. Superimposed nickel price due to Ruimu accident continues to be strong, spot wait-and-see mood is strong. Curb spot trading. In the afternoon, the nickel price high shock movement, the trading continues to be light.

Nickel pig iron: SMM high nickel pig iron (ex-factory price) is 1140-1160 yuan / nickel point, which is the same as that of the previous day. It is heard that the low price inquiry of a stainless steel factory in South China is 1150 yuan / nickel point (including tax). On the whole, there are still very few suppliers who can accept the price in the market as a whole. Since yesterday's rebound, nickel prices remained strong today, high nickel pig iron prices also held steady. The industry believes that under this price, the mentality of the nickel and iron plant to continue to sell goods will slow down, and may gradually strengthen the quotation in the later stage, but considering that most stainless steel plants are still operating at a slight loss, the price of stainless steel has not improved with the nickel price, and the price of high nickel pig iron is naturally difficult to have a bright performance, even if the recovery will be very small.