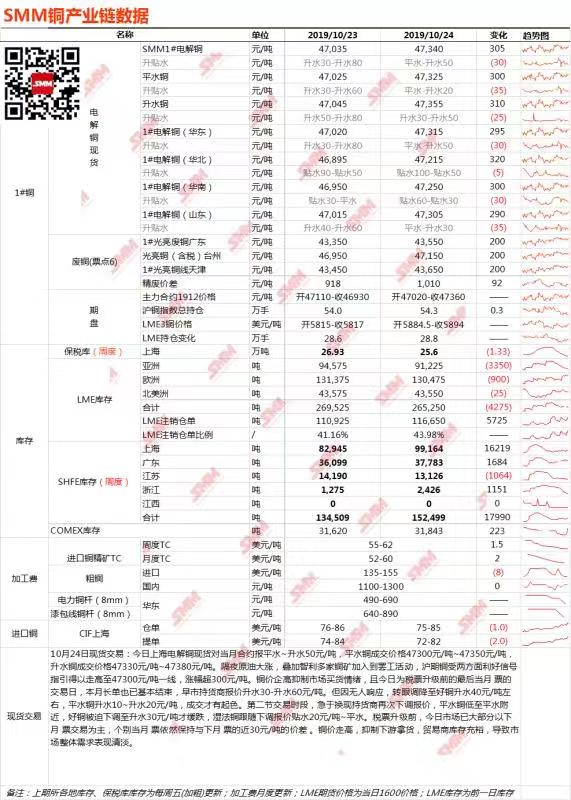 [10. 25 SMM Bronze Morning meeting minutes] Macro aspect: 1) British Prime Minister Johnson: it looks like the European Union will approve Britain's request to postpone Brexit. 2) the ECB left the three major interest rates unchanged, all in line with expectations. ECB President Draghi: there is a need to take a highly loose position for a longer period of time, and the ECB is ready to adjust all tools as needed. 3) the initial value of Markit manufacturing PMI in the United States in October was 51.5, expected 50.9, while the initial value of manufacturing PMI in the euro area in October was 45.7, expected to be 46. Euro-zone manufacturing shrank for the ninth month in a row, with the euro-zone economy on the brink of contraction. Fundamentals: 1) Copper concentrate: the Freeport Grasberg copper mine will transition to underground mining by the end of the year and increase underground production, which is expected to reach 386000 tons per year in 2023. 2) scrap copper: yesterday, the fine waste price spread was slightly expanded to 1010 yuan / ton, and the fine waste price difference still has no advantage for scrap copper consumption. The market is still uncertain about the six types of waste policies. At present, domestic waste enterprises have a variety of policies to buy unrestricted copper ingots or transfer dismantling enterprises or factories to Southeast Asia and other places. Domestic waste copper supply still takes time to enter the outbreak period. 3) Import of copper: there was a loss of about 250 yuan / ton on imports yesterday. Price comparisons were flat this week and demand remained light until there were few deals in the market yesterday. Some traders still maintain high quotations, on the one hand, due to the high cost of holding goods, on the other hand, the current losses are still not very large, I hope that holdings will wait for opportunities in price fluctuations. At the same time, the market low quotation began to increase, but still no buying, part of the counter-offer less than the offer nearly $15, it is very difficult to close, the actual market transaction price can be reduced. 4) inventory: LME copper stocks decreased by 4275 tons to 265250 tons on October 24, while copper warehouse receipt stocks increased by 778 tons to 61997 tons. 5) spot: on the spot side, due to the continued high price of copper, coupled with the recent weakening of demand for long orders and tax bills, overall demand is expected to be weaker today, and holders are forced to adjust prices under inventory pressure to ship goods, and spot quotations are expected to be discounted today. It is estimated that today's spot discount of 10-liter water 30 yuan / ton. Copper prices and forecasts: overnight, due to the release of economic data in the United States first depressed and then rose, durable goods order rate was lower than expected, and Markit manufacturing PMI exceeded expectations, the dollar fell sharply after a sharp rise, copper prices were affected by its open low. At present, many countries have released PMI data, the European euro zone economy has shrunk for nine months in a row, Germany is still weak, European Central Bank President Draghi said that he held a loose policy for a longer period of time, the weakening of US durable goods order data also continued to increase market expectations for the United States to cut interest rates, the weakness of the global economy continued to push gold prices higher, and CMX gold prices have now stood steady around 1505. Overall, the global economic data released a few days ago remain weak, supporting the high price of copper. Copper prices are expected to fall back slightly higher today. It is estimated that today's copper 5850-5900 U. S. dollars / ton, Shanghai Copper 47100-47500 yuan / ton.