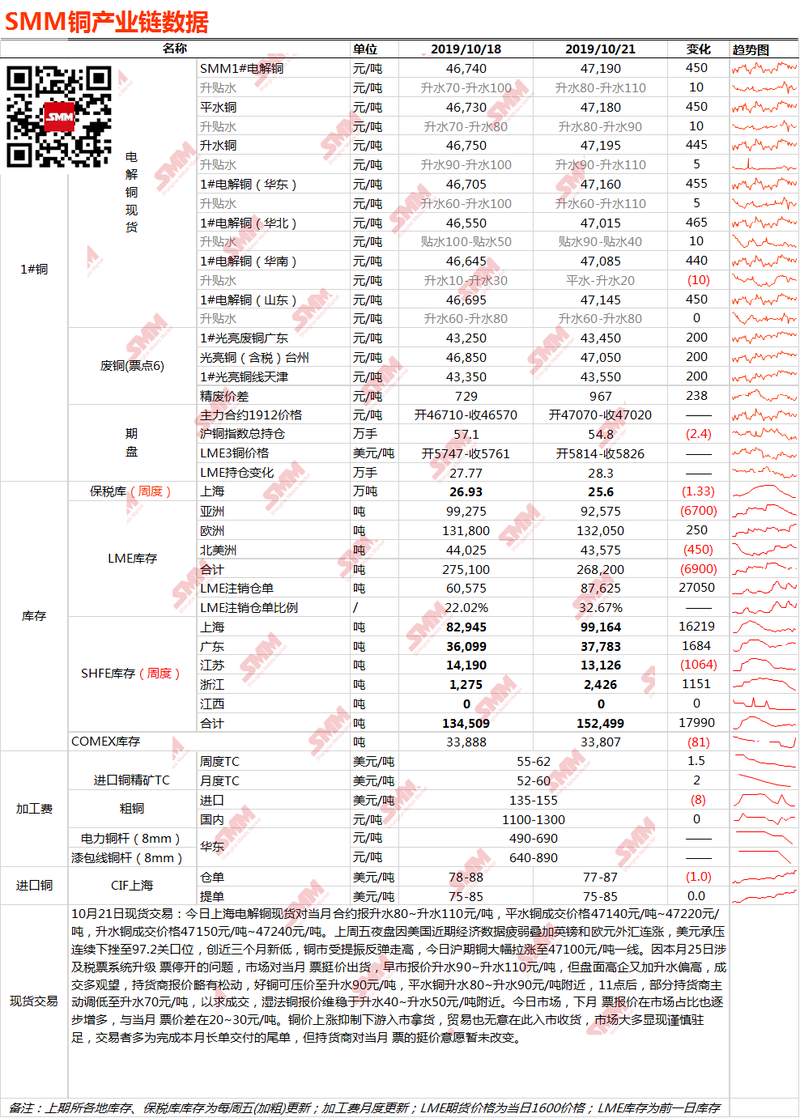 [10. 22 SMM Bronze Morning meeting minutes] Macro aspect: 1) optimism that Johnson has now received enough support for Parliament to pass the Brexit agreement is heating up. Cabinet ministers made it clear that Johnson did not flinch after parliament passed an amendment on Saturday forcing the prime minister to write to the European Union asking for a three-month extension of Brexit. Johnson will again ask the House of Commons to vote for his Brexit deal with the European Union on Monday. 2) Germany reported an annualized PPI rate of-0.1% in September, well below the normal value of 2%. The Bundesbank reported monthly that the German economy may have contracted in the third quarter, and export downside risks also affected the domestic economy. Fundamentals: 1) Copper concentrate: Union workers at BHP Billiton's Escondida copper mine will hold a one-day strike from Tuesday in support of Chilean demonstrations, the union president said on Monday. 2) scrap copper: the price difference between fine and waste rose slightly to 967 yuan / ton yesterday. From January to August 2019, China imported a total of 931000 tons of scrap copper, an increase of 9.8 percent over the same period last year, and there was still an increase of about 83000 tons over the same period last year. But scrap copper approval plummeted in the fourth quarter, adding to fears of a tight supply of scrap copper. 3) Import of copper: there was a loss of about 100 yuan / ton on imports yesterday. Yesterday's import losses expanded, the morning market enquiries are less, almost no transactions. Traders' quotations continue to maintain their previous levels, but psychological transaction price expectations have been lower, due to weak demand, transaction prices have not yet seen a wide range of decline. The recent decline in LME inventory performance, LME Contango structure also has a narrowing trend, is not conducive to the rise in premium. 4) inventory: LME copper stocks were reduced by 200 tons to 268200 tons on October 21, while copper warehouse receipt stocks in the previous period were reduced by 1327 tons to 61920 tons. 5) spot: recently, due to bills and long single demand, the market quotation remains high, the holder is willing to offer more, but the high price plus high water makes the downstream purchase restrained, the overall transaction performance stalemate, it is expected that the spot water 70-100 yuan / ton. Copper prices and forecasts: overnight trading continued to rise mainly due to optimistic expectations of Brexit, sterling hit 1.3 against the dollar, hitting a nearly five-month high, the dollar fell five days to 97.3, copper prices were boosted; at the same time, Chile's recent strike riots, sparking market concerns about the supply side, is also one of the factors supporting the rise in copper prices. At present, the main reason for the high performance of copper prices in the past two days is still driven by unexpected news events, but the global macro situation has not improved significantly, and the effect of interest rate cuts in various countries on the economy has not yet been shown. Crude oil has been taxiing at the low level at level 53 under the influence of worried demand, which has a negative impact on the copper market. And the domestic aspect electrolytic copper continues to accumulate the reservoir, the consumption is mediocre, the fundamental support power is insufficient. Copper prices are expected to fall slightly today. In terms of spot, it is expected that today's copper 58005850 US dollars / ton, Shanghai copper 4690047300 yuan / ton.