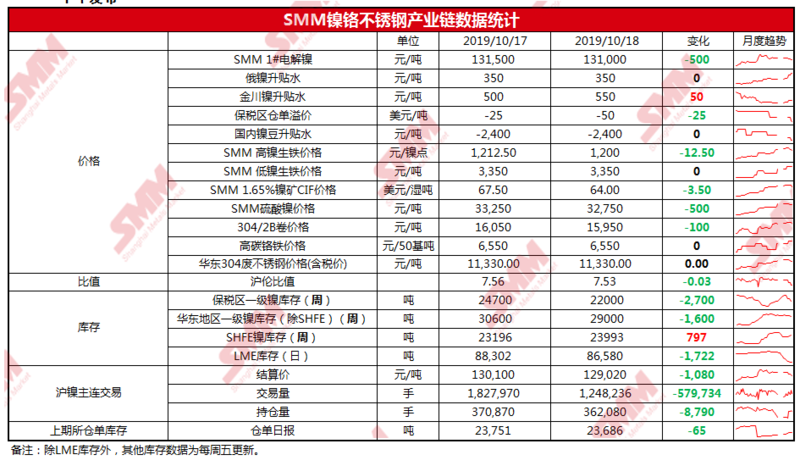 On the macro front, the dollar closed down in the last session. Foreign exchange markets were volatile last week, dominated by Brexit, with sterling surging more than 300 points, or more than 2 per cent, the week before last week, boosting European currencies and commodity currencies, but sending the dollar index to a new low in nearly three months. A number of lower-than-expected US economic data last week raised expectations of further Fed rate cuts this month. The probability that the Fed will cut interest rates by 25 basis points in October is 70 per cent. On October 19, Beijing time, British Prime Minister Boris Johnson said that although losing the parliamentary vote meant he had to ask the European Union for an extension, he would not do so.

Spot nickel: in the spot market, on October 18, Russian nickel was 300 yuan higher than Shanghai nickel 1911 to 400 yuan / ton, and Jinchuan nickel was 500-600 yuan / ton higher than Shanghai nickel 1911 contract. Today, nickel prices show signs of stopping and falling. Nickel prices fluctuate around a narrow range of 130600 in the morning, with no significant change. Spot market transactions were slightly better than yesterday, but the improvement was not obvious. Basically, there are concentrated transactions near 130600, with 300 yuan per ton of water rising between traders, and the purchase of downstream markets is flat. On the whole, the transaction today is slightly better than yesterday, but not as active as the first half of the week. According to SMM, large steel mills have recently received nickel plates, resulting in a small supply of negotiable goods. The ex-factory price of Jinchuan Company is 131300 yuan / ton, 400 yuan / ton lower than yesterday. The mainstream transaction is in the range of 130800 yuan / ton to 131400 yuan / ton. The volatility of nickel prices in the afternoon is larger than that in the morning, but the market response is mediocre, and near the weekend, transactions are also affected to a certain extent.

On October 18th, according to SMM, the total amount of nickel stocks in Shanghai, including inventory of previous warehouse receipts, was down 3503 tons to 75000 tons from last week by 4.5 per cent. Domestic stocks fell 803 tons to 53000 tons from last week, including about 11700 tons of nickel beans and about 41300 tons of nickel plates. In the same period, the refined nickel inventory in the Shanghai Free Trade Zone was about 22000 tons, 2700 tons less than last week, of which 5500 tons were nickel beans, 500 tons less than before the festival.

Price judgment: due to the general consensus in the market that this round of inventory decline has become more recessive and lack of real consumption drive, the recent short power, this round of decline momentum is relatively strong, it is expected that this round of decline will be stopped for some time. The fundamentals have not changed much, and the tight situation of negotiable deliverables in the later stage still needs to be vigilant. Shanghai nickel lost 128000 yuan / ton in the morning, there is no support below, and it will continue to weaken in the short term.