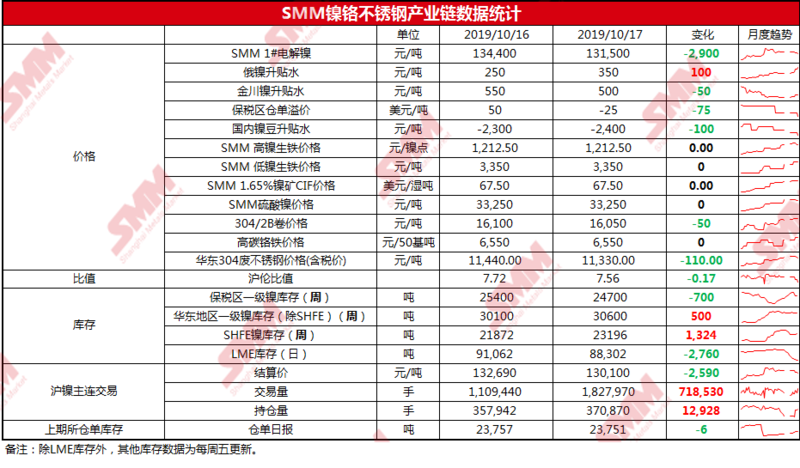 Macroscopically, according to the National Bureau of Statistics, China's GDP grew by 6% in the third quarter compared with the same period last year, and the value added of industries above the scale increased by 5.8% in September. From January to September, the area of new real estate construction in China increased by 8.6%, down 0.3 percentage points. British Prime Minister Johnson reached a Brexit agreement with the European Union, but it was opposed by Northern Ireland allies, which will face a severe test in the British Parliament on Saturday. In the United States, manufacturing output fell the most in five months in September, affected by factors such as workers' strikes. New housing starts fell from a 12-year high in September. Consumer purchases hit a record high last week

Nickel spot: on October 17, Russian nickel compared with Shanghai nickel 1911 rose by 300 yuan to 400 yuan / ton, Jinchuan nickel generally reported 400-600 yuan / ton compared with Shanghai nickel 1911 contract, only a few traders reported 400 yuan / ton, generally reported in the rising water 600 yuan / ton. Today's nickel prices continued yesterday's decline, opening all the way lower. In the process of falling, the response of the spot market is mediocre, fully reflecting the mentality of buying up and not buying and falling, and is generally pessimistic about the future. Russian nickel rising water continues to rise slightly, but the trading is not ideal, because the source of negotiable goods is tight superimposed nickel price fell sharply, the holder is more willing to rise. However, there are still some low-liter water supply transactions, Jinchuan Shengshui 400 yuan / ton has the actual transaction. On the whole, it is not as active as the first half of the week, converging with yesterday. The ex-factory price of Jinchuan Company is 131700 yuan / ton, 3000 yuan / ton higher than yesterday. In the afternoon, nickel prices basically maintained a narrow range of fluctuations around 130000, the market has not yet improved, the level of activity continued in the morning, waiting for a further correction in nickel prices.

Nickel price judgment: Lunni closed in the small negative column, the top pressure moving average, below there is no other support level, today pay attention to Lunni 16200 US dollars / ton first-line platform high support situation. Overnight, Shanghai Nickel closed at the Xiao Yin Cross Star, standing at the 60-day moving average of 128600 yuan / ton. Today, we pay attention to the support of the 60-day moving average to Shanghai Nickel to see if Shanghai Nickel can hold the 128000 yuan / ton barrier. Although the recent market continues to be weak, but according to SMM understanding of the recent large number of steel mills to receive goods, need to guard against the continuous decline in inventory in the later stage, high spot concentration, insufficient negotiable deliverables.