CST
translation
Source:SMM
SMM10, March 16: SMM believes that looking forward to 2020, zinc concentrate increment although narrowed compared with 2019, but the increment is still considerable, with the new expansion project put into production cycle, the new production capacity gradually realized, the ore end discharge is obvious, it is expected that the supply of 2020 zinc concentrate has increased, with the mine loose to the ingot loose conduction channel has been opened, in the case of no production reduction maintenance, refinery production is expected to maintain a high load level. However, at present, the high processing fees ignite the enthusiasm of the smelter to put into production, reduce and postpone the phenomenon of maintenance, or lead to the increase of smelters facing maintenance in 2020, thus hindering the smooth transmission between ingots.

At the beginning of 2018, the high zinc price ignited the enthusiasm for the recovery of the concentrate end, but the long production cycle superimposed the decline of raw ore grade and other multiple factors, although the overseas concentrate increased but not as expected, the overall trend of restorative growth. The domestic zinc concentrate is limited by the impact of environmental protection and policy tightening, and the increment is less. Against the background of relatively loose supply of overseas mines, the profit of superimposed imports is good, and the influx of imported mines in 2018 makes up for the shortage of domestic concentrate supply.

From 2019 to 2020, the new production capacity of zinc concentrate was gradually realized. 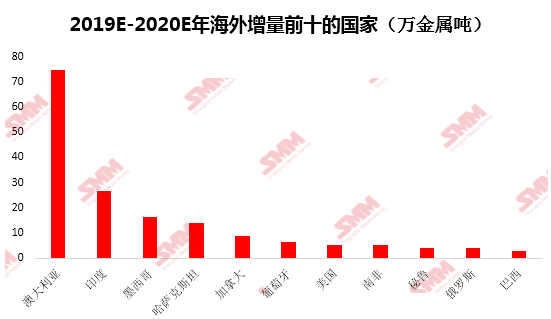 According to SMM research, more than 20 mines in China have plans to increase production. The domestic increment of zinc concentrate in 2018 is nearly 240000 metal tons, and the increase of 2019 domestic zinc concentrate is expected to exceed 200000 metal tons in 2018, a decrease of 16.67 percent over the same period last year, and an increase of nearly 110000 metal tons in 2020 compared with 2019, down 45 percent from the same period last year. The new production capacity from 2019 to 2020 is mainly concentrated in Inner Mongolia, Hunan, Tibet and Anhui, of which nearly half of the new production capacity is located in Inner Mongolia, with a total estimated increase of nearly 110000 metal tons in two years. From the point of view of mining enterprises, Zhongkai Mining's mine in Tibet contributes 30, 000 tons of metal, Yao Jialing's mine in Anhui Province contributes 25000 tons of metal, Baoshan non-ferrous metal mine in Hunan contributes 24000 tons of metal, and Guojin Mining and Daxing'anling Forest Mining Industry in Inner Mongolia contribute 2.2 and 19400 metal tons, respectively. According to SMM, looking ahead to 2020, although the increment of zinc concentrate is somewhat narrower than that of 2019, the increment is still considerable. With the passage of the new expansion project production cycle, the new production capacity is gradually realized, the ore end discharge is obvious, and the supply of 2020 zinc concentrate is expected to rise steadily. With the loose conduction channel from mine to ingot, refinery production is expected to maintain a high load level without production reduction and maintenance. However, it should be noted that the current high processing fees ignite the enthusiasm for the production of smelters, reduce and delay the phenomenon of maintenance, or lead to an increase in the number of smelters facing maintenance in 2020, thus hindering the smooth transmission between ingots.