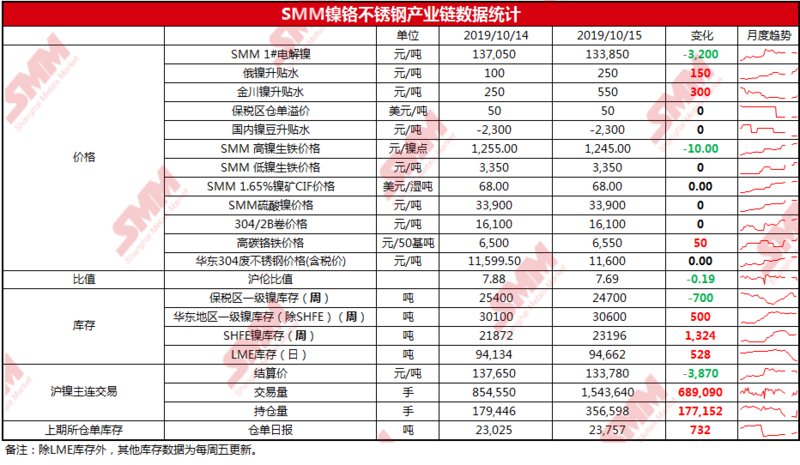 At the macro level, the dollar index closed slightly lower yesterday as most Fed officials supported the need to cut interest rates in September, prompting excessive bets on expectations of a rate cut, putting pressure on the dollar index, despite growing divergence in the Fed's internal policy outlook. The trade situation in Japan, the United States and Europe has renewed uncertainty, and investors are still worried about its negative impact on the economy, and the dollar may benefit from rising demand for safe havens. The IMF downgraded its global economic forecasts, and the US economy still has a comparative advantage. The International Monetary Fund (IMF) released its World Economic Outlook report, lowering the US GDP growth forecast for 2019 from 2.6 per cent to 2.4 per cent and the US GDP growth forecast to 2.1 per cent in 2020. The IMF downgraded global economic forecasts, which could exacerbate expectations of a weaker global economy and heighten risk aversion.

Nickel spot: on October 15, Russian nickel compared with Shanghai nickel 1911 rose 200 yuan to 300 yuan / ton, Jinchuan nickel generally reported 500-600 yuan / ton compared with Shanghai nickel 1911 contract, the discount went higher, one is due to the recent trading improvement, the other is that the nickel price has fallen sharply since last night, and the decline continues today, and the holders generally support the rising water. Today's nickel prices as a whole fell more than 3000 yuan / ton from the same trading session yesterday, and the overall transaction converged with yesterday, but the feedback from individual traders was not as active as yesterday. Today, transactions around 133500 were slightly active, it was more difficult for traders to replenish their warehouses, and transactions between downstream and traders improved. Recently Jinchuan company intends to raise water, Jinchuan company ex-factory price of 134000 yuan / ton, 3700 yuan / ton lower than yesterday. Mainstream transactions with 133300 yuan / ton-134300 yuan / ton.

Nickel pig iron: SMM high nickel pig iron (ex-factory price) is 12301260yuan / nickel point, which is 10 yuan / nickel point lower than that of the previous day, and there is still room for further reduction in the short term. The breakthrough in the price of high-nickel pig iron in the early stage is closely related to the financial behavior of individual manufacturers and traders. However, nickel prices have been loosened this week, and foreign enquiries from large stainless steel plants in the south are still dominated by low prices or a small number of purchases. Market confidence has also fallen very quickly. Some operators have said that although there are still a small number of transactions in the price range above 1230 yuan (ex-factory), However, most shippers are difficult to ship even at the price of 1220 yuan / nickel point. Although the manufacturer's offer is still high at 1260 yuan / nickel point or so, but there is still room for discussion.