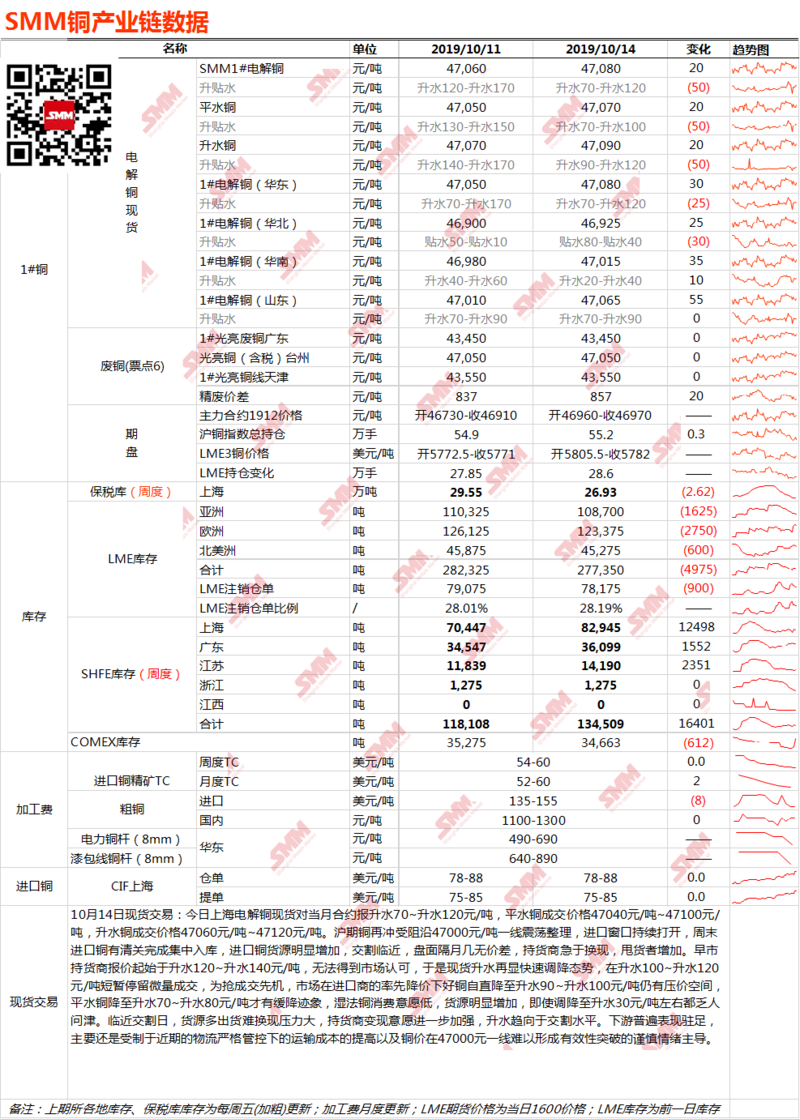 [10. 15 SMM Bronze Morning meeting minutes] Macro aspect: 1) the Queen of England said that the government has always made it a top priority to ensure that Britain leaves the European Union on October 31. Johnson will address parliament at 22:20 Beijing time, and Britain hopes to make progress on Brexit as soon as possible. 2) there is still a lot of uncertainty about global trade, and investors are again bearish on the oil market demand outlook, especially as China's unexpected import and export data during the day have reinforced this view. 3) China's exports fell 0.7% in September from a year earlier, with an expected increase of 1.5%; imports fell 6.2%, and expected to fall 2.3%. In the first three quarters, exports increased by 5.2% over the same period last year, imports fell by 0.1%, and the trade surplus was 2.05 trillion yuan, an increase of 44.2%. Fundamentals: 1) Copper concentrate: workers at the Antucoya copper mine in Antofagasta, Chile, began government mediation negotiations earlier this month and refused to bid for a new contract, with plans to go on strike from Wednesday. The mine produced 72000 tons of copper last year. 2) scrap copper: the price difference of fine scrap yesterday was 857 yuan / ton. Scrap copper holders have low profits and strong sentiment for covering and selling goods; Sino-US trade negotiations are not as good as expected, market expectations for consumption are lower, terminal consumption is weak, downstream buying enthusiasm is still not strong, and actual transactions are still limited. 3) Import of copper: there was a loss of about 50 yuan / ton on imports yesterday. Import prices have weakened again, domestic trade prices have also dropped sharply, today's market trading is light, there are few enquiries. The holder's quotation remains unchanged, but it is difficult to pick up the order. At present, there is no willingness to take the initiative to reduce the price to ship the goods, covering the goods and waiting for the goods to wait and see, and the quotation remains unchanged today. 4) inventory: LME copper stocks were reduced by 4975 tons to 277350 tons on October 14. The stock of copper warehouse receipts in the previous period increased by 3585 tons to 61728 tons. 5) spot: spot due to recent consideration of spot delivery, spot quotation to maintain the level of delivery near, in addition, due to the recent import of a large number of copper imports, quotation performance is difficult to have room for upward adjustment, and the market transaction is mediocre. It is estimated that spot water will rise by 60 yuan to 100 yuan per ton today. Copper prices and forecasts: last night, due to the recent Sino-US trade and Brexit good news was gradually digested, the market returned to caution, copper prices high walking energy is insufficient, the opening is short. At present, the market optimism has come to an end, there are still worries about the further development of trade prospects, investors are back to worry about the global macroeconomic weakness, CMX gold prices have also rallied to the 1500 level, while in Europe, the pound has fallen slightly, falling below the 1.26th mark, as it will still take time and risks to implement the orderly Brexit agreement. On the whole, the market is returning to rationality, weak demand is still an important reason for the lack of impulse energy on the copper price, crude oil is also worried about the demand side, oil prices fell back to the 53 level, the superposition of multiple factors is still disadvantageous to the sharp rise in copper prices. Focus on today's domestic September CPI and PPI data, is expected to maintain a high shock pattern today, the current Shanghai copper closing Yangzhu, short-term attention to the 20-day moving average pressure level. It is estimated that London Copper 5780-5840 US dollars / ton, Shanghai Copper 46700-47300 yuan / ton.