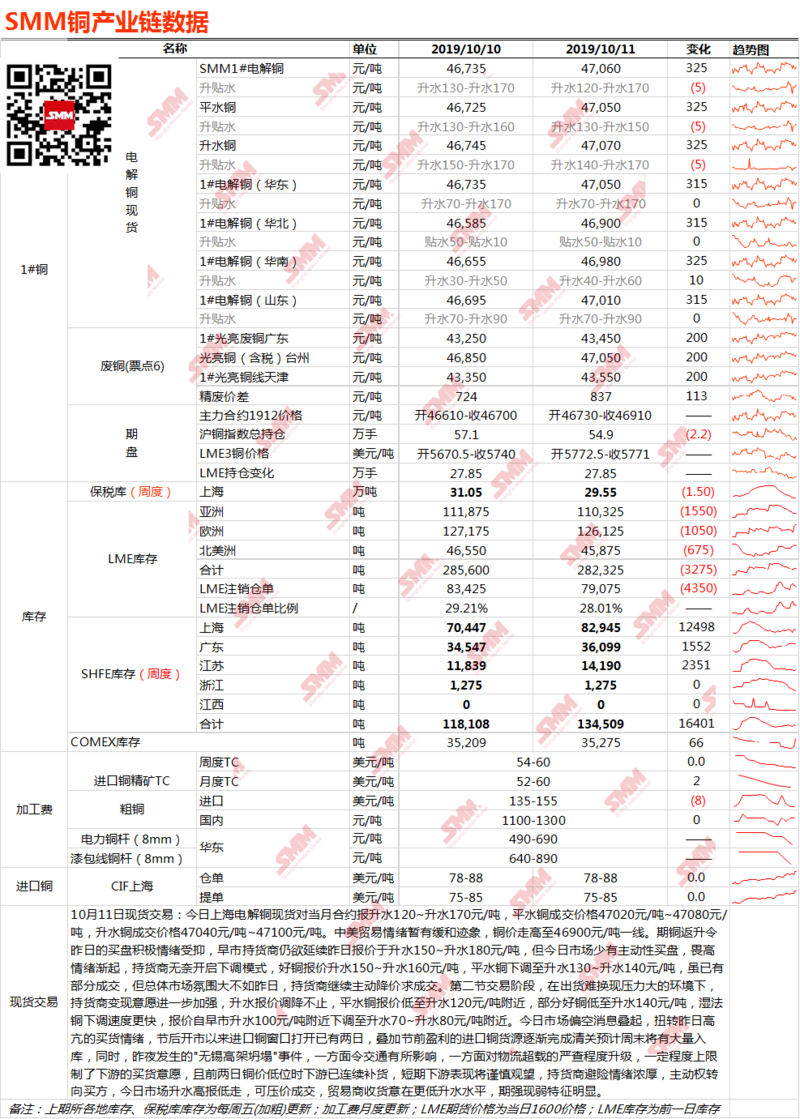 [10. 14 SMM Bronze Morning meeting Summary] Macro aspect: 1) US President Trump said that China and the United States have agreed on the framework of some trade agreements, and that the two heads of state can sign the first phase of the agreement as soon as next month, while postponing the increase in tariff rates originally scheduled for this week. Trump said the United States and China were "very close" to ending the trade war and that the agreement to be reached would benefit both the United States and China and the world. 2) Tusk, President of the Council of Europe: Britain has still not put forward a practical proposal to leave the European Union. After meeting with Johnson yesterday, it was still possible to reach an agreement after receiving a signing letter promised by the Irish Prime Minister. European Union summit to be held on October 17-18. British Prime Minister Johnson will negotiate a new Brexit agreement with EU leaders. Fundamentals: 1) Copper concentrate: as of Friday, SMM Clean Mine spot TC was at $54-$60 / ton, flat on a month-on-month basis. Last week is the first week of the return after National Day, the market buyers and sellers are more cautious, spot quotation stalemate, the actual transaction is limited. On the other hand, the focus of attention has shifted to the upcoming fourth quarter meeting of the CSPT group in Shanghai, as the fourth quarter meeting will not only agree on the Floor price, of the fourth quarter CSPT group copper concentrate spot TC, but more importantly, the CSPT group will also discuss the long single TC next year, in preparation for the annual meeting of LME in London at the end of October. 2) scrap copper: the average price difference of fine waste last week was 823 yuan / ton, 213 yuan / ton less than the previous month. During the National Day period, copper prices fell back from recent highs, and the price difference between fine and waste prices returned to less than 1,000 yuan again. Scrap copper traders cover goods and cherish the mood to sell again, more reluctant to ship goods at low prices. Downstream copper processing plant orders are flat, taking goods is not active. At present, some waste copper enterprises have reduced production because of the scarcity of raw material supply, which is mainly used in the smelting industry, which imports more waste copper, which also led to a month-on-month decline in domestic electrolytic copper production in September. 3) imported copper: the price of Yangshan copper premium warehouse receipt remained unchanged at US $78-88 / ton last week, and the price of bill of lading was raised to US $75-85 / ton from US $72-82 / ton at the beginning of the week, with an average price increase of US $3 / ton. Two days before the return of the market activity is general, the market inquiry is mostly to understand the market, few transactions. As the import window occasionally opened to stimulate market demand, market activity gradually improved, to Thursday market transactions are relatively hot. Copper stocks in the Shanghai bonded area fell another 26200 tons to 269300 tons on Friday compared with the previous month because of better market comparisons before and after National Day. The supply of warehouse orders is still decreasing, the price of the bill of lading remains stable, and the premium is still easy to rise and difficult to fall in the later stage. 4) inventories: last week, LME copper stocks rose 16100 tons to 282325 tons from the previous month; copper stocks in the previous period rose 16401 tons to 134509 tons; bonded warehouse stocks fell 26200 tons to 269300 tons month-on-month. 5) spot: on the spot side, due to the sharp rise in the disk price, it is expected that the buying sentiment in the high price market will be restrained, and the holder is expected to lower the quotation, but as the spot is about to be delivered in the near future, the overall quotation will not be reduced too much. It is estimated that spot water will rise by 60 yuan to 110 yuan per ton today. Copper prices and forecasts: last Friday, the internal and external market continued to rise, Lun copper high above $5825 / ton, closed at $5803 / ton, up 0.39%, Shanghai copper peak above 47200 yuan / ton, the end of the day closed at 47110 yuan / ton, up 0.43%. Mainly due to good trade negotiations between China and the United States, the market risk aversion has eased, superimposed on the prospect of Brexit, the pound rose 1.65% on the day, a new high in nearly three months. The copper market was boosted by a fall in safe-haven demand combined with a surge in sterling, with the US index falling near 98.3. Now that trade between China and the United States has made substantial progress, Trump said the two countries are very close to the end of the trade war, which is conducive to a higher copper market. At the same time, on the European side, the heads of state of Britain and Ireland have reached a gradual agreement that the prospects for Brexit are good and good for the European economy. At present, the improvement in the trade environment and the easing of political turmoil in Europe are good for the weak global macro-economy, safe haven assets have declined, CMX gold prices have reached a low of $1478 / oz, also a boost to commodities, copper prices are expected to rise under multiple advantages. At present, Shanghai copper has broken through a number of moving averages, the pressure level has changed to the support level, the technical side is good for Shanghai copper. Copper prices are expected to continue to rise today. It is estimated that today's copper 5780-5840 U. S. dollars / ton, Shanghai Copper 46900-47300 yuan / ton.