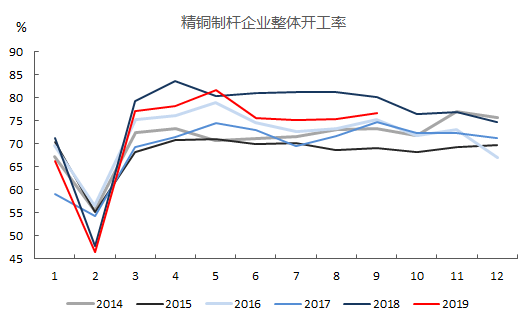 In September, the raw material inventory ratio of refined copper rod enterprises was 10.72%, up 0.28 percentage points from the previous month. September is about to usher in the 11th holiday, copper rod enterprises to increase the purchase of pre-festival storage, but most enterprises are not optimistic about the subsequent consumption, at the same time, the market for the macro trend and copper prices still have greater uncertainty, the enthusiasm of the warehouse is not as strong as in previous years, slightly cautious.

It is expected that the operating rate of refined copper rod enterprises will drop slightly to 74.78% in October.

According to SMM research, the operating rate of refined copper rod enterprises in October is expected to be 74.78%, a year-on-year decline of 1.64 percentage points, a month-on-month decline of 2.03 percentage points. In October, the operating rate of refined copper rod enterprises declined. On the one hand, some enterprises had a factory holiday during the National Day holiday, which affected some of the output. On the other hand, the amount of power investment is still not good, according to SMM, downstream cable enterprises for the fourth quarter cable consumption optimism has gradually weakened; but on the whole, October is still the start of infrastructure, power and other projects in the peak season, the overall demand will remain stable.

Copper rod maker operating rate inches up in Aug on greater demand
The rate stood at 75.45% in Aug, up 0.36 percentage point from Jul but down 5.9 percentage points from Aug 2018

Operating rates at scrap-using copper rod producers extend decline in May
Losses are expected to further lower rates to 48.2% in Jun, down 6.24 percentage points from May

Raw material shortage suspends copper rod output at Shandong Xiangrui
Suspension is estimated to lower its output to 7,000 mt in May