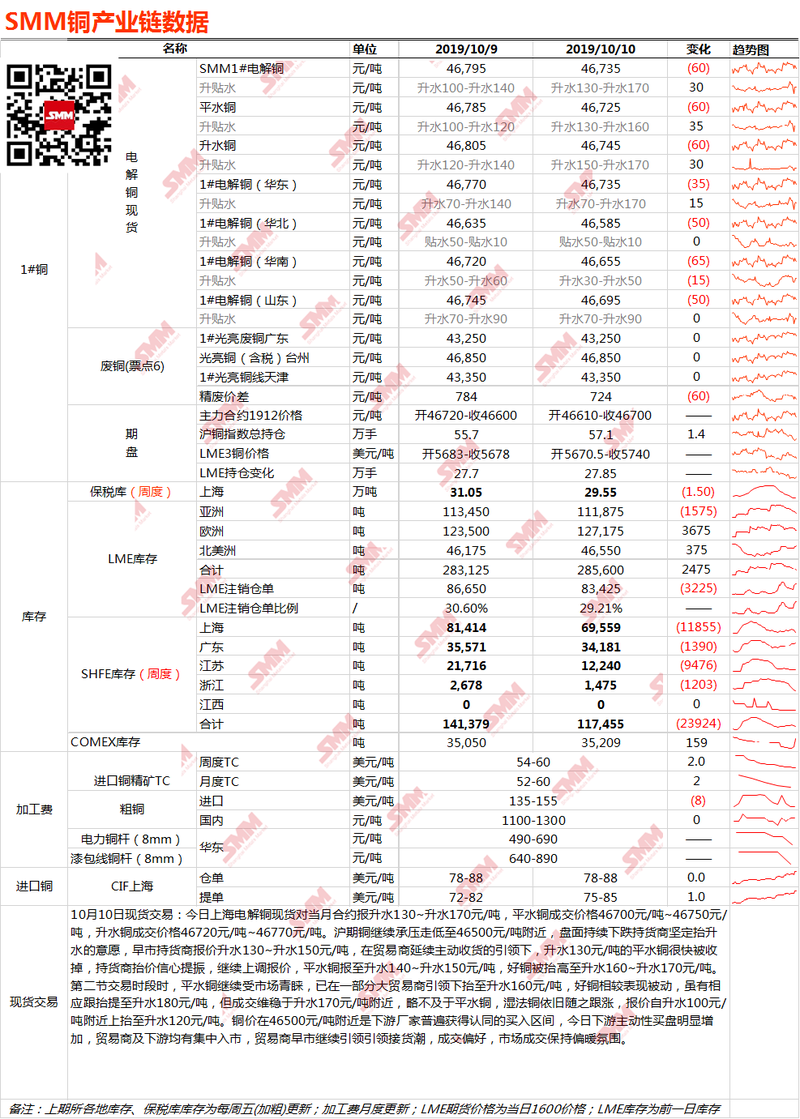 [10. 11 SMM Bronze Morning meeting Summary] Macro aspect: 1) China and the United States have concluded the first day of economic and trade consultations, and representatives from both sides have hinted that they are cautiously optimistic about reaching some agreements. Liu he said China came with great sincerity and was willing to reach a consensus with the United States on trade issues, market access and other issues of concern. Trump said progress was "very smooth" and would meet with Chinese Vice Premier Liu he on Friday. 2) Britain and the European Union took a step closer to reaching a Brexit agreement, with British and Irish leaders holding "constructive" talks, both of which agreed that there was a potential path to the Brexit agreement. The Irish prime minister expects a deal to be reached by the end of this month. The pound rose sharply. 3) the US CPI was flat in September from the previous month, with an expected increase of 0.1 per cent. The number of initial claims for unemployment benefits in the United States for the week to 5 October was 210000 and is expected to be 219000. Fundamentals: 1) Copper concentrate: Minmetals yesterday disclosed that the access road to and from the, Las Bambas mine has been blocked and logistics has been interrupted since September 22. At present, the production of copper concentrate has not been affected, but if the logistics entering the mine cannot be resumed for some time in the future, the mining operation will be gradually affected; in addition, due to road congestion, the concentrate cannot be transported to the port, and shipping to some customers has been delayed. 2) scrap copper: the price difference between fine and waste copper was reduced to 724 yuan / ton yesterday. Up to now, the demand for scrap copper is still weak, the order performance of waste enterprises is poor, and the procurement continues to be cautious. However, the shortage of scrap copper supply shows no sign of easing, and the scrap six types of approvals are expected to fall sharply in the fourth quarter, and the scrap copper supply will be more tight. 3) Import of copper: yesterday's import profit of about 50 yuan / ton. Recently, the price comparison is better, the market demand is OK, after the festival wait and see two days later, the market transaction is a little more active today. Price volatility is small, but there is still a small rise compared with before the festival, and the market buying activity has also improved. 4) inventory: LME copper stocks increased by 2475 tons to 285600 tons on October 10. The stock of copper warehouse receipts in the previous period increased by 8270 tons to 60547 tons. 5) spot: in the spot aspect, recently, due to the low copper price to attract positive downstream buying, the current copper price performance has rebounded, the market buying sentiment is expected to be suppressed, and the room for quotation to rise is limited. Spot water is expected to rise by 150-180 yuan per ton today. Copper prices and forecasts: last night, the market rose sharply, mainly due to the easing of trade sentiment between China and the United States, a sharp boost in market confidence, while the US CPI was lower than expected, the market's expectations of the Fed interest rate cut increased, superimposed on the smooth Brexit negotiations, the pound surge put pressure on the dollar, the dollar fell to 98.6 levels, a new low in nearly two weeks, and the copper market was boosted sharply. At present, the market is dominated by optimistic news, and both China and the United States have expressed the hope that the trade negotiations will proceed smoothly and reach a consensus to prevent further escalation. At the same time, Brexit is progressing smoothly, and the active meeting between British and Irish leaders has brought the UK and the European Union one step closer to reaching a Brexit agreement, with sterling rising more than 1.93% a day, the market risk aversion has weakened, and CMX spot gold has fallen back below the $1500 / oz mark. Copper prices are expected to remain high and stable today. It is estimated that London Copper 5750,5800 US dollars / ton, Shanghai Copper 4670047200 yuan / ton.