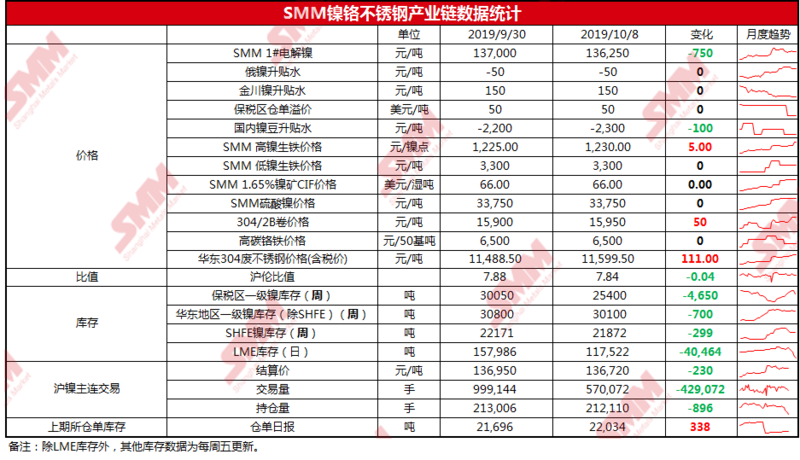 On the macro front, on October 7, the US Department of Commerce added 28 Chinese entities to the list of "entities" for export control. In response, a spokesman for the Chinese Ministry of Commerce urged the US side to stop its erroneous acts and said that it would take all necessary measures to resolutely safeguard China's own interests.

Mr Powell said the Fed would remain committed to supporting the US economic recovery, but would rely on the performance of the economic data to make monetary policy decisions rather than pre-set interest rate cuts. The speech suggests that an interest rate cut in October may not be a sure thing compared with market expectations. So far this year, the Fed has cut its benchmark interest rate twice, and the market now expects the bank to cut interest rates for the third time at the end of this month.

Nickel spot: on October 8, Russia nickel than Shanghai nickel 1911 discount 100 yuan / ton to flat water, Jinchuan nickel compared with Shanghai nickel 1911 contract generally increased water 100-200 yuan / ton, the discount water is more stable than before the festival. On the first trading day after the festival, nickel prices fell all the way from around 138500 to around 135000, but because of the low activity of the spot market after the festival, the decline in nickel prices had limited stimulus to spot transactions, and the overall trading in the market was still relatively deserted. Nickel prices stabilized and rebounded to 137000 in the process, spot transactions slightly improved, but the volume is still not optimistic, only a small amount of cautious procurement. The ex-factory price of Jinchuan Company is 136500 yuan / ton, which is 500 yuan / ton lower than that before the festival, and the mainstream transaction is 135800-136500 yuan / ton. In the afternoon, nickel prices fluctuated around 136400-137000, the transaction continued the morning mood, the response is still mediocre, the mainstream transaction at 136400-

On October 8, 304 and 316 scrap stainless steel prices were generally increased by 100 yuan / ton, 304 side charge 10250-10450 yuan / ton, 316 return charge 15800-16000 yuan / ton, 201 waste 4350-4450 yuan / ton, 430 waste 3750-3800 yuan / ton, the prices were the same as before the festival. A trader in East China said that the supply of waste in the market has been tight recently.On the one hand, some processing and foundry plants have been restricted due to environmental protection problems, which has reduced the output of waste to a certain extent; on the other hand, some traders are optimistic about the demand for waste in the later stage and have hoarded some of the waste.

Nickel price judgment: Lunni inventory continues to decline shows that the long is still in force, so far the Back structure of the price boost is relatively limited, but wait and see whether inventory continues to maintain a downward trend, considering the high concentration of nickel bulls, inventory decline trend under the price is difficult to fall significantly, short-term Shanghai nickel has a certain support above 135000.