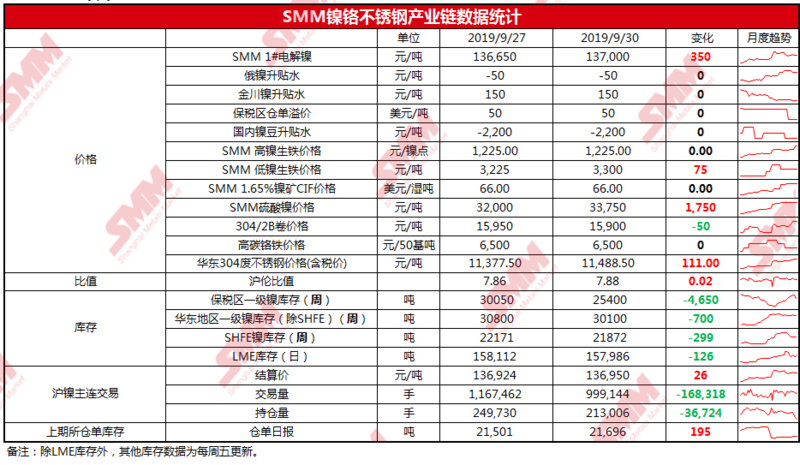 Macroscopically, during the holiday period, the United States released a series of economic data, of which the ISM manufacturing PMI in September hit a new low of 47.8 in nearly a decade, the non-manufacturing PMI hit a new low of 52.6 in nearly three years, and the non-farm employment data in September was slightly lower than expected at 136000, although the unemployment rate hit a new low of 3.5% in 50 years. According to CME "Fed Watch" analysis, the probability that the Fed will cut interest rates by 25 basis points to 1.50-1.75 per cent in October is 78 per cent.

Inventory: 125688 tons of Lunni stocks on 7 October, 7440 tons less than on 4 October. During the National Day period, Lunni maintained an obvious strong operation of Back structure under the support of bulls, and the inventory of warehouse receipts decreased significantly almost every day.

Nickel market judgment: during the holiday Lunni inventory continued to decline shows that the long is still in force, so far the price increase brought about by the Back structure is limited, but wait and see whether the inventory continues to maintain a downward trend in the later stage, considering the high concentration of Lunni bulls and the difficulty of falling prices under the downward trend of inventory, Shanghai nickel has a certain support above 135000 in the short term.

Nickel spot: pre-festival traders due to the National Day holiday, and downstream demand has not improved, basically stopped replenishing storage, waiting to see after the festival. As far as Jinchuan nickel is concerned, although the rising water has basically dropped to a historical low from a historical point of view, due to the recent active shipment of Jinchuan company, the circulation of goods in the spot market has increased, while downstream demand has not improved, traders are also cautious in replenishing their warehouses, and transactions are relatively weak. After the festival, Russia Nickel is expected to continue to discount the Shanghai Nickel 1911 contract to Ping Shui, while Jinchuan's Shanghai Nickel 1911 contract will rise by 100-300 yuan per ton.