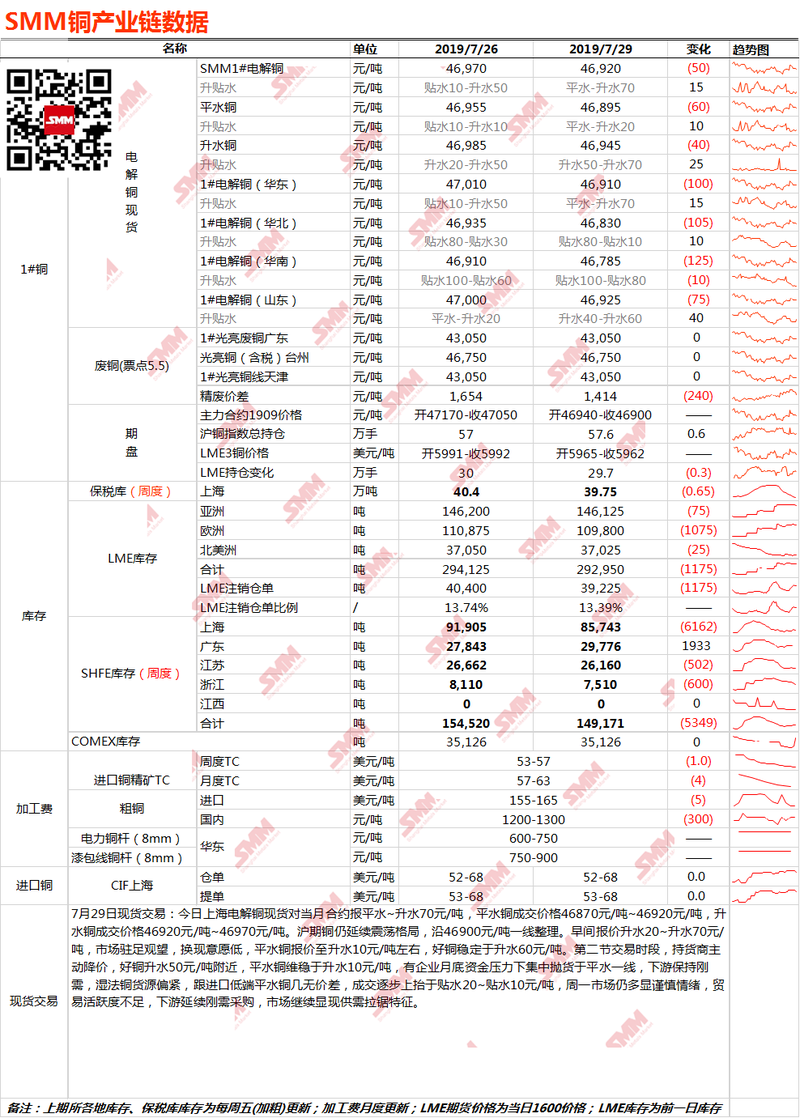 [7.30 SMM copper morning meeting minutes] Macro aspects: 1) representatives of China and the United States began to resume consultations in Shanghai today. The market waited for the outcome of the negotiations, with copper prices rising more than 0.8 per cent in the evening. 2) in the run-up to the Fed's policy meeting, US President Donald Trump once again attacked the Fed, complaining that it "is likely to do very little" in dealing with monetary easing in Europe and China, saying that "a small cut in interest rates is not enough". (3) British Prime Minister Johnson said he will not negotiate with the EU on Brexit unless EU leaders agree to repeat the Brexit agreement reached between Theresa May, his predecessor, and the EU. With the risk of unagreed Brexit soaring, the pound fell to its lowest level since March 2017 and the yield on 10-year bonds fell to its lowest level since August 2016. Fundamentals: 1) scrap copper: yesterday refined scrap price difference of 1414 yuan / ton. SMM adjusted the scrap point from 5 per cent to 5.5 per cent, and the premium price spread fell slightly. July-August is the off-season of consumption, the terminal consumption is relatively light, the wait-and-see mood of waste enterprises is stronger, and the willingness to purchase is light. Awaiting the outcome of the trade talks and the Fed's decision to guide copper prices will affect shipments by holders in the scrap copper market. 2) Import copper: yesterday LME0-3 discount 18 US dollars / ton, import loss of about 100 yuan / ton. The import price on Monday was better than last week, but there were fewer inquiries in the foreign trade market in the morning, and demand did not improve. Due to the small supply of goods in the market, traders offer enthusiasm is not high, the trading atmosphere is light, buyers and sellers hold more wait-and-see attitude. Market prices remained unchanged for the time being yesterday, but the rise has been weak and is more likely to fall in the future. 3) stocks: LME copper stocks decreased by 1175 tons to 292950 tons on 29 July, while copper stocks increased by 554 tons to 62995 tons in the previous period. 4) spot: spot due to the recent market circulation of goods affected by the reduction in imported copper, the quotation of the holder is strong. However, today's market prices rose sharply, high prices will be expected to curb the current mood of holding up prices. It is expected that today's spot flat water-liter 50 yuan / ton. Copper prices and forecasts: last night, the overall performance of internal and external trading showed a high trend, Lun Copper broke through the 6000 mark to 6023 yuan / ton high, Shanghai copper also straight line up 47310 yuan / ton, up 0.81 per cent. The Shanghai Copper Index lost 3362 positions to 572000, mainly by short positions. Sentiment improved, mainly because the market was waiting for the upcoming 12th round of trade talks between China and the United States. Today's Sino-US negotiations are expected to have some positive comments, continue to affect market sentiment, copper prices are expected to rise again, but due to fundamental constraints, the upward space is limited. At present, Shanghai copper harvest entity Dayang column, the end of 6 consecutive negative situation, KDJ index low signs of recovery. It is estimated that London copper is US $6000 to US $6040 / ton and Shanghai Copper is expected to be US $47000 to 47500 yuan / ton today.