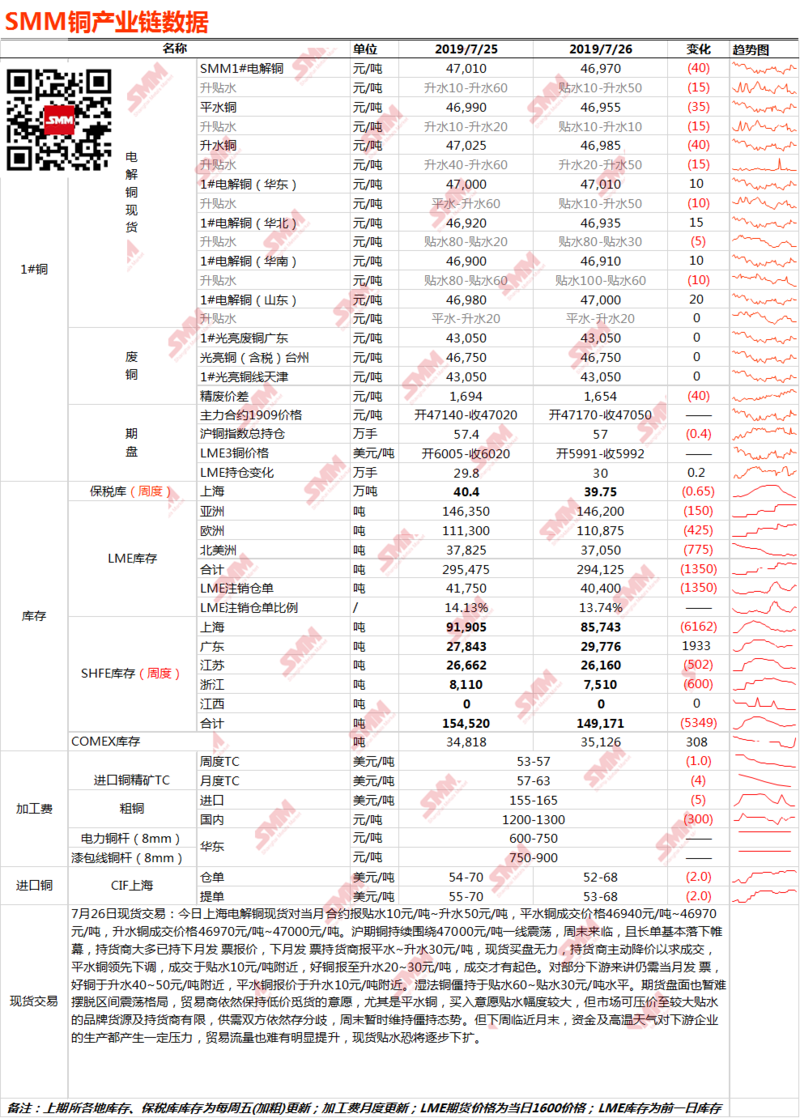 [7.29 SMM Bronze Morning minutes] Macro: 1) as the United States and China hold consultations in Shanghai this week, Trump claims that China may not sign a trade agreement until after the 2020 US election, and instructs trade representatives to put pressure on the WTO to challenge China's status as a developing country. 2) US GDP growth slowed to 2.1 per cent in the second quarter, higher than economists had expected, thanks to better-than-expected consumer spending; however, weak business investment and exports highlighted the risks or supported the Fed's rate cut this week. 3) the profits of China's industrial enterprises above size fell 3.1 per cent in June from a year earlier, highlighting the disadvantages facing the Chinese economy. Fundamentals: 1) Copper concentrate: as of Friday, the spot TC of SMM clean ore was US $53 to US $57 / ton, down US $1 / ton from the previous month. Spot copper concentrate TC continued to fall and sulfuric acid prices depressed, for copper smelter production pressure is still increasing, most people said that smelter focus on reducing capacity utilization or delay the production of some new expansion capacity, in order to reverse the spot copper concentrate TC continued decline. 2) waste copper: last week, the average price difference of refined waste was 1760 yuan / ton, an increase of 51 yuan / ton compared with the previous month. Copper prices failed to hold their high last week, the scrap copper market returned to the light market after the copper price fell, and the weak consumption of scrap copper continued to support the domestic spot discount to maintain a medium-high level, but the actual consumer side did not perform very well. 3) Import copper: the import loss widened slightly last week, and the Yangshan copper premium weakened slightly. At present, the market has more supply in August, less in the supply, and LME maintains in the contango structure and there is an expansion trend, the market shipping enthusiasm is not high, the holder is waiting for next week to change to September QP to earn the QP price difference, so supply and demand under the price stalemate at the beginning of the week, until Friday the mainstream transaction price has been significantly reduced, some of the bill of lading prices in recent months lower and shipping difficulties, the overall demand for warehouse bills is still weaker than the bill of lading. 4) stocks: LME copper stocks decreased by 1350 tons to 294125 tons on July 26. Last week, copper stocks fell by 5331 tons to 149189 tons compared with the previous month. Copper stocks in the Shanghai bonded area fell 6500 tons to 397500 tons on Friday from a month earlier. Since May 10, copper stocks in the bonded area have been reduced for 12 weeks in a row. As of today, there has been a cumulative reduction of 190500 tons, compared with 44200 tons after the Spring Festival. According to SMM, the decline in copper stocks in the bonded area is still due to the decline in imported copper. 5) spot: as the spot market enters the settlement period at the end of the month, the market trading becomes light, and the disk performance is temporarily unstable, restraining the buying sentiment. Copper prices and forecasts: the overall center of gravity of the inside and outside markets shifted sharply on Friday. The lowest position of Shanghai Copper fell to US $5955 per ton, and Shanghai Copper broke through the 47000 level at the beginning of evening trading, falling as low as 46780 yuan / ton, a drop of 0.45%. In the evening, the Shanghai Copper Index mainly showed an increase in short positions and an increase in its position of more than 8000 hands. Mainly because Friday night released U. S. second-quarter GDP data more positive than expected for the dollar, the dollar broke through the 98 mark, copper prices weakened under pressure. With the Fed due to announce an interest rate resolution this week, there is little controversy about expectations of a rate cut, but there is little chance of supporting a big rate cut, which is expected to boost copper prices in the short term. There are signs of easing in Sino-US trade, and the US side has announced that it will waive tariffs on 110 items of Chinese industrial exports to the United States, and market sentiment is expected to improve. At the same time, continue to pay attention to the 12th round of trade talks between China and the United States this week, which will guide commodity prices. Before the technical face of Shanghai copper closed negative, the overall center of gravity hovered in the Brin middle rail, below by the 20-day EMA support, the technical side is expected to rebound. It is expected that today's London copper 5950 to 5990 US dollars / ton, Shanghai copper 46800 to 47100 yuan / ton, spot discount 20-liter water 40 yuan / ton.