CST
translation
Source:SMM
SMM, July 29: according to the latest customs data from the General Administration of Customs, refined zinc imports in May 2019 were 59300 tons, down 23.57 percent from the previous month, up 0.32 percent from the same period last year, and cumulative imports from January to May 2019 totaled 277600 tons, an increase of 19.66 percent over the same period last year. 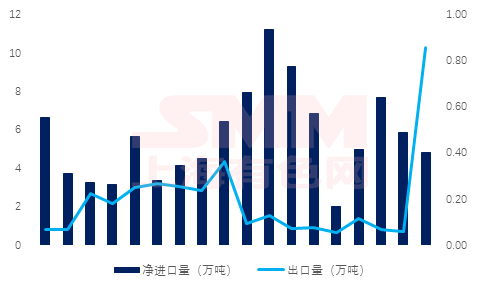 It is also explained here that the export volume of refined zinc reached the highest level of the year in June, with a total export of 8600 tons, while the total export volume from January to May 2019 was only 3700 tons. The main exporter is 0 # zinc, and the main export directions are Malaysia, Vietnam, Bangladesh and India. Therefore, the net import in June was 48300 tons, down 17.8% from May. If about 10 000 tons of 2 # zinc imported from the United Arab Emirates in May was removed, the net import in June was only 1.1% lower than that in May. The average Shanghai-London ratio in June was 7.89, which was revised up rapidly from 7. 7 in May, and the average monthly import loss narrowed by about 380 yuan / ton to around 1230 yuan / ton. Driven by the domestic squeeze, the Shanghai-London ratio accelerated to above 8.0. at the same time, the import loss narrowed sharply to about 1000 yuan / ton, but after delivery, the chicken feathers were everywhere, and the internal and external price quickly fell to the starting point. Because the domestic supply has returned to a higher level, the domestic inventory has stopped falling and rose in June, and there is the possibility of further accumulation in July, and the balance between domestic supply and demand will be reached first. While the combination of overseas high Back and low inventory continues, the basic face of LME zinc spot support is strong, import losses maintained at a high level, is still not conducive to the inflow of imported zinc. From a time point of view, the narrowing of losses caused by warehouse crowding gives the bonded area the opportunity to import zinc, but it is difficult to bring about a significant increase in the amount of zinc coming to Hong Kong, corresponding to the continued desolation of the foreign trade market in June. Although the inventory of the bonded area decreased by 15600 tons in June, the proportion of re-exports should not be underestimated.

In July, with the rapid collapse of the overseas structure, the structure of overseas Cash- in March changed from Back to contango, and the import loss narrowed rapidly. At one point, the import loss narrowed to about 300 to 500 yuan / ton. However, under the background of weak consumption season and relatively loose domestic supply, there was no actual import profit, the import intention of traders was weak, and the foreign trade market continued to be light. It is expected that zinc imports will continue to be long single in July, and the import volume will be basically the same as that in June.