On Friday, the comments of Williams doves, chairman of the New York Federal Reserve, superimposed a strong wave of global interest rate cuts, stimulating a sharp rise in non-ferrous metals. On Friday, capital flows into the copper market were obvious. Shanghai copper rose to 48400 in the evening. This is the first time since the trade friction between China and the United States intensified during May 1 this year, the first attempt to fill the previous short gap, but after Williams doves were clarified, the market cut interest rate expectations by 50 basis points sharply, coupled with the weakness of the euro. The dollar rose all the way, copper prices rose after a flash in the pan, continue to enter the trend of shock weakness. At present, it has basically given up its increase last week, maintaining it at around 47000 yuan per ton. Is there still a chance that copper prices will continue to rise and strengthen?

At present, the global economy is still in a weakening trend, unfavorable to the strength of commodities, frequent trade disputes and geopolitical conflicts, strong market risk aversion, and copper prices fluctuate with macro-market news. From the basic point of view of the performance of the copper industry, on the supply side, the TC of spot copper concentrate has been declining since the beginning of the year. As of July 26, the TC of spot copper concentrate has dropped to US $55 per ton. Some small and medium-sized smelters have entered a state of loss. However, due to higher production costs and government pressure, enterprises will still maintain production even if they lose money. It is expected to have little effect on the supply of electrolytic copper. At the same time, with the end of centralized maintenance in April and May, the newly expanded production capacity gradually reached production. According to SMM research, the operating rate of copper smelting enterprises reached 86.19% in June, an increase of 14.96% from the previous month. The supply of domestic electrolytic copper is expected to increase substantially in the third quarter. Copper consumption terminal is mainly used in electric power, automobile, real estate, household appliances and other fields. The power industry is the main force of copper consumption. From January to June 2019, the cumulative investment in the national power grid totaled 164.4 billion yuan, down 19.3 per cent from the same period last year. In the real estate industry as of June, the area of housing completed fell 12.7% year-on-year. The traditional automobile industry is still depressed, and the downward trend is obvious. Although the new energy vehicles perform well, it is still difficult to boost the copper consumption of the automobile industry as a whole. In the year to June, the home appliance industry produced 7.461 million refrigerators in June, down 4.1 percent from May, and washing machines produced 6.502 million units in June, down 4.5 percent from the previous month. As of May, the cumulative production of air conditioners was only 1.4% higher than the same period last year, and the cumulative sales volume was 1.6% lower than the same period last year. The overall copper start-up rate is also declining with the decline in terminal demand, and the demand for copper is expected to be limited in the third quarter as the terminal industry enters the off-season. Copper rod wire accounts for more than half of copper consumption. Take the copper rod wire industry chain as an example. According to SMM research, the start-up rate of the wire and cable industry in June was 2.33% lower than that in May, and the start-up rate in June reached 89.7%. As terminal consumption enters the off-season, it is expected that the start-up rate of wire and cable in July will continue to decline by about 3%. At the same time, according to SMM, the enamelled wire industry generally reflects that the market is light and the terminal order has been reduced. Especially as the enamelled wire industry enters the off-season, because the terminal demand is light, the enamelled wire manufacturer's willingness to increase production is insufficient, basically in the level of maintaining production, the demand for copper rod has also been weakened.

Overall, the weakness of fundamental demand superimposed the release of supply, the trend of domestic accumulation will increase, and the fundamentals lack the support for the sustained uptick in copper prices. Even if copper prices are affected by macro optimism in the short term, due to the weak situation of fundamentals, the probability of copper price correction is greater. 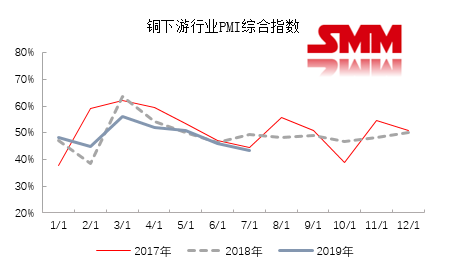