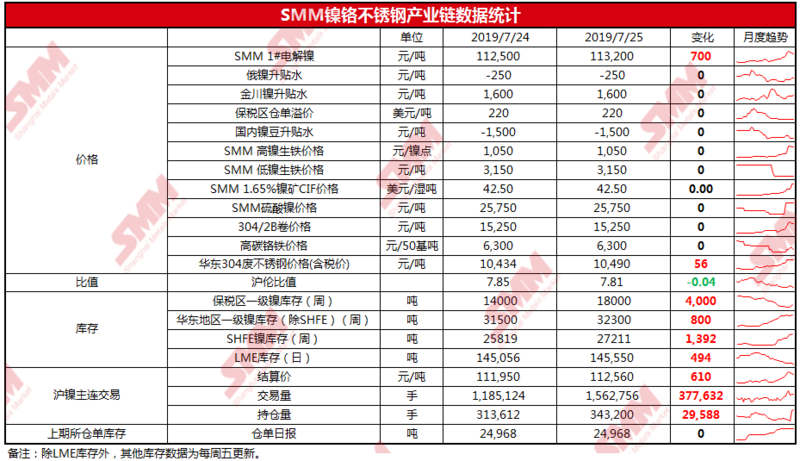 Macroscopically, the United States last week after the quarterly adjustment of the number of initial jobless claims (thousands) (to 0720) final value 206, the data is smaller than expected. In July, the ECB interest rate resolution left the three major policy interest rates unchanged, but expressed the importance of the inflation target, implying an implied interest rate cut, and some institutions predicted that the ECB would be more likely to cut interest rates in September. On the Chinese side, the Ministry of Commerce announced on the 25th that the 12th round of Sino-US high-level economic and trade consultations will be held in Shanghai from July 30 to 31. This is also the resumption of consultations between China and the United States more than two months after the 11th round of consultations from May 9 to 10.

Nickel spot: July 25 SMM1# electrolytic nickel 112200 114200 yuan / ton. The discount of Russian nickel is about 300 yuan / ton compared with that of Shanghai nickel 1908, and Jinchuan nickel is about 1500 yuan / ton higher than that of Shanghai nickel 1908, which is basically the same as that of the previous day. However, in the past two days, the transaction of discount 350-discount 300 is relatively active. Early trading hours, nickel prices open low, to 112500 after consolidation, spot continue to ship a small amount, more for traders to replenish each other, downstream cautious procurement. Nickel prices continued to fall after the second trading period continued to fluctuate, but the stimulus to the market was limited, and the transaction enthusiasm continued in the early trading period.

Nickel price judgment: from the latest active shipment strategy of stainless steel plant, we can see that stainless steel consumer demand is still under pressure, and there is no obvious improvement. The plate surface of nickel price is also affected by stainless steel falling price after the lack of financial support. Combined with the position situation, the short position is slightly dominant in the near future, and the weak operation is expected in the short term. However, the pace of destocking of stainless steel is still in the hands of steel mills, and it is rumored that Indonesian stainless steel has the possibility of increasing production and returning to the country with ferronickel or less than expected, so whether the bulls will make a comeback over time has led to speculation about whether the bulls will return after a period of time.