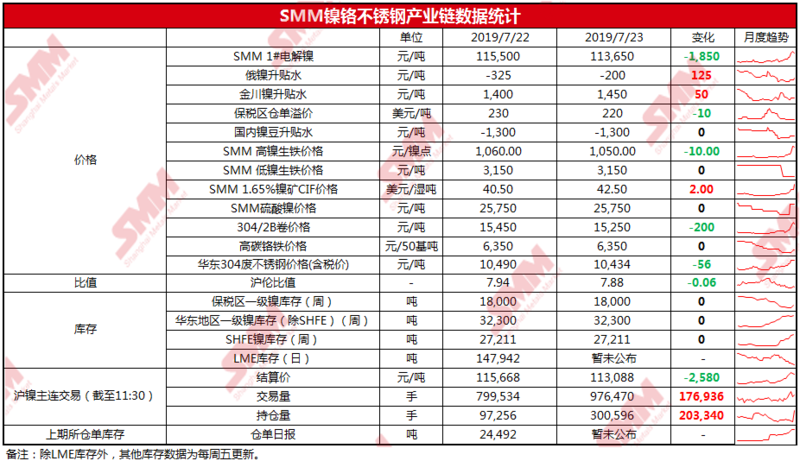 Spot: Russian nickel than Shanghai nickel 1908 discount 300-paste 200 yuan / ton, basically the same as yesterday. Jinchuan nickel than Shanghai nickel 1908 contract generally reported a water rise of 1500 to 1700 yuan / ton, which continues to expand from yesterday. However, in the past two days, the transaction of discount 350-discount 300 is relatively active. In early trading, the nickel price fluctuated around 111700 above the daily average, although it fell in the same trading session yesterday, but there was no response downstream today, and the transaction was not as positive as yesterday. Nickel prices fell to around 111200 in the second trading session, with a slight improvement in trading, but the overall picture was not optimistic. Recently, traders replenish Jinchuan nickel relatively downstream, the downstream is basically wait-and-see. The ex-factory price of Jinchuan Company was quoted at 112300, down 2200 yuan / ton from yesterday. After Jinchuan ex-factory price, traders slightly reduced Jinchuan Shengshui, but the stimulation to the market was limited, and the mainstream transaction was 111000-112800 yuan / ton.

[ferrochromium price rising trend continues to limit electricity is still the main reason for the price increase] on July 23, the ferrochromium market maintained a rising trend, some manufacturers quoted 6300 to 6400 yuan / 50 base tons, rising by about 50 yuan / 50 base tons, Inner Mongolia electricity limit is still the main reason for the increase in ferrochromium prices, at the same time, the recent rise in chromium ore is also the iron factory to produce certain support. Near the end of the month, although the short-term ferrochromium prices rose slightly, but some people in the industry believe that the second round of steel moves will be the same as last month, the main price trend depends on downstream demand and transaction situation.

According to the SMM survey, the total amount of nickel stocks in Shanghai, including the previous warehouse receipt stocks, rose 6192 tons, or 8.68 per cent, from last week to 77500 tons. The specific changes are as follows: stocks in East China increased by 800 tons to 32300 tons compared with last week, while stocks in the Shanghai Free Trade Zone (including Shanghai Tianwei, Capital Management Hall, facing Port, Jiekai and Henry Bath) refined nickel stocks increased by 4000 tons to 18000 tons over the same period.