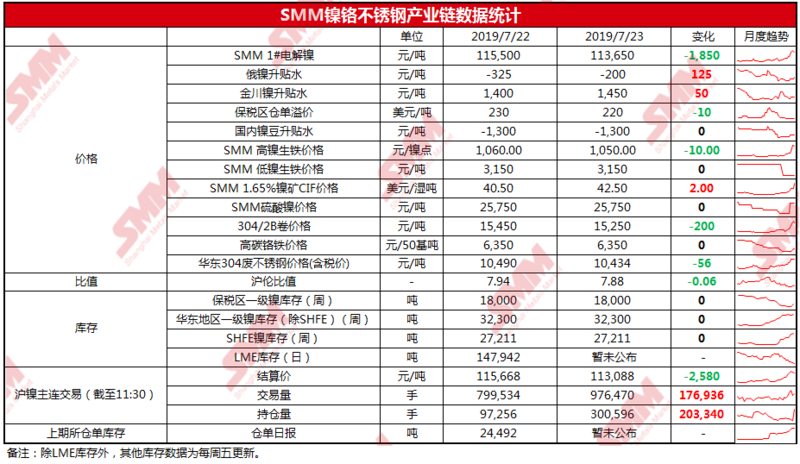 On the macro front, Mr Trump reached a two-year budget deal with Congress and rising government discretionary spending dented investor fears that the US government would fall back into shutdown later this year. Us API crude oil stocks changed last week (10,000 barrels) (to 0719) the final value of-1096, the previous value-140; the data is smaller than the previous value, crude oil rose after the release of the data. Next week, China and the United States will hold a new round of face-to-face economic and trade talks in Beijing within a few days, stimulating the stock and oil markets to rise. Boris Johnson, former foreign secretary and former mayor of London, was elected leader of the ruling Conservative Party on July 23 and will take over as prime minister.

Nickel spot: July 23 SMM 1 # electrolytic nickel 112700 to 114600 yuan / ton. Russian nickel than Shanghai nickel 1908 sticker 300-stick 100 yuan / ton, narrower than yesterday. In early trading, the nickel price fell to less than 112000 yuan, stabilized and rebounded, to 113000 after a narrow range of shock, the morning transaction response was flat, more for traders to inquire each other, the lower reaches of the market buyers are less. Although the spot transaction is cold, but the holder because recently does not have the massive source of goods to flow into the domestic, basically by the straight rise discount water primarily. Jinchuan nickel than Shanghai nickel 1908 contract generally reported a water rise of 1400 yuan / ton, compared with yesterday continued to expand. Jinchuan nickel transaction is also light, but the recent Jinchuan nickel circulation is tight, resulting in a small rise in rising water. The ex-factory price of Jinchuan Company was quoted at 114500, down 1500 yuan per ton from yesterday, and the mainstream transaction was 112900 to 114700 yuan per ton. Afternoon nickel prices weakened slightly, spot trading sentiment continued in the morning, the overall transaction today is general.

Nickel price judgment: the early nickel price continued to rise more away from the fundamentals, this week the price of a rational return and part of the bulls profit is normal; wait and see follow-up attention to the capital side of the trend, at present, bulls have not yet had a large number of signs of withdrawal.