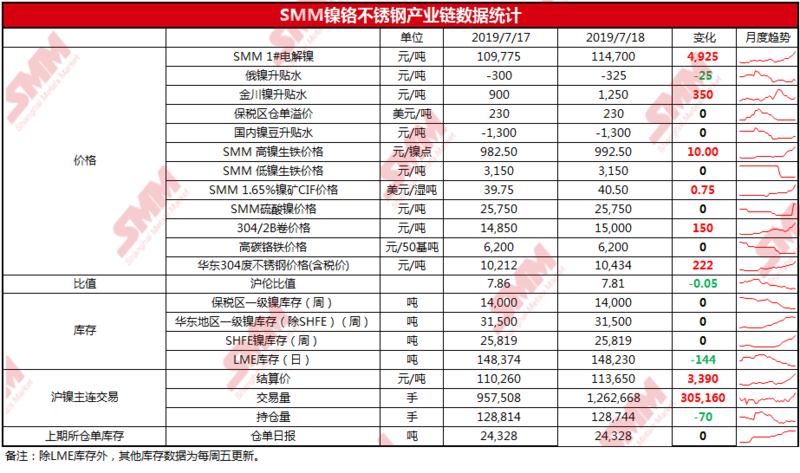 Macroscopically: in the early hours of the morning, New York Federal Reserve Bank President Williams said in a statement that "when you only have so much stimulus on hand, it is worthwhile to act quickly to lower interest rates at the first sign of a recession." The US index fell briefly, or on heightened expectations for the Fed to cut interest rates. Yesterday, the public value of the number of initial jobless claims in the United States was 21.6, slightly higher than the previous value, but the four-week average changed little. On the crude side, U.S. crude oil both fell more than 1% as crude oil production in the Gulf of Mexico will rise after last week's hurricane. Today, we focus on the initial value of the University of Michigan consumer confidence index in July.

Nickel pig iron: on Thursday, according to SMM research, a southern steel mill this week high nickel iron purchase price of 1080 to 1090 yuan / nickel point, to the plant including tax, up from the transaction price of 980 to 1000 yuan / nickel point last week, delivery will be from the end of August to mid-September.

Nickel price judgment: there is no substantial and significant news change on the supply and demand side, the recent continuous rise in nickel price and the positive measures of large stainless steel plants are also inseparable, and the products in each link of the industrial chain are also in a state of passive follow-up, and the price is expected to be strong in the short term. however, the pace of the capital-supported bull market is more difficult to grasp, and it is basically not suitable for unilateral traders to enter the market now. Follow-up attention to the trend of funds. Many rumors about Indonesia, such as financing, policy changes, etc., are worth analyzing and measuring, but they are also lack of guidance for the short-term market.