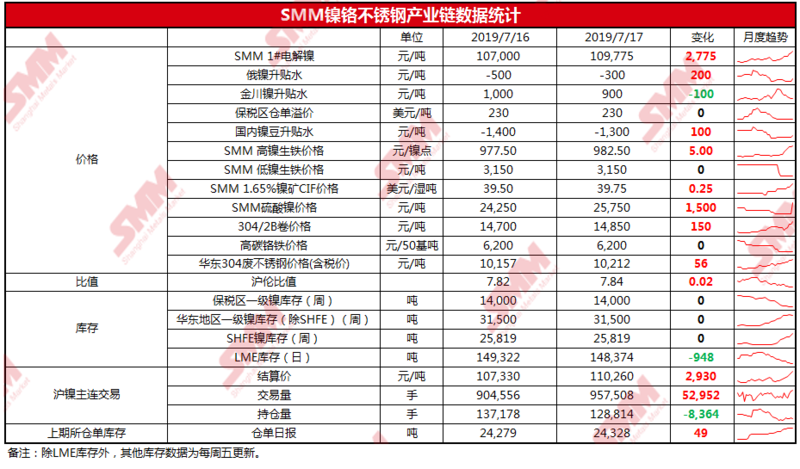 Macroscopically, yesterday released that the U. S. June housing start annualized data less than expected, falling for the second month in a row; construction permit data fell to a two-year low, the United States Index weakened in the evening. The Federal Reserve released a brown book on the economy early this morning. The brown book shows that the US economy continues to maintain moderate growth, the rate of job growth moderates, and inflation remains stable or slightly weaker. Today focused on the number of initial jobless claims (10,000) in the week ended July 13 and EIA natural gas stocks (100 million cubic feet) in the week ended July 12, the Philadelphia Federal Reserve Manufacturing Index in July.

Nickel spot: July 16 Wednesday SMM 1 # electrolytic nickel 109150 to 110400 yuan / ton. The discount of Russian nickel is about 300yuan / ton compared with that of Shanghai nickel 1908, which is narrower than that of the previous day. On Tuesday, downstream steel mills entered the market near Gate 108000, with considerable trading volume and improved trading volume. Import profits and losses continue to be large, flows into the domestic supply is not much, Wednesday nickel plate holders have narrowed the Russian nickel discount, spot traders feedback nickel plate transactions are not as good as Tuesday. Jinchuan nickel generally reported a rise of 800 yuan to 1, 000 yuan per ton compared with the Shanghai nickel 1908 contract, which was slightly narrower than on Tuesday.

Nickel pig iron: the purchase of large stainless steel plants in the south is concentrated in the first two to three weeks, and the demand by the end of August has been basically met after the purchase. Although suppliers have the intention to increase nickel prices this week, but as steel mills have few bulk purchases, whether the price center of nickel pig iron can keep up with the rise will have to wait for further approval from steel mills.

Nickel price judgment: SMM believes that in the supply side has not yet had a major news change in the context, the recent continued rise in nickel prices and large stainless steel plant positive measures are also inseparable, and the original spot weak disk crazy differences are also trying to improve, the price is expected to be strong in the short term, but the pace of the financial support of the bull market is more difficult to grasp, basically not suitable for unilateral traders now enter the market. Follow-up attention to the trend of funds.