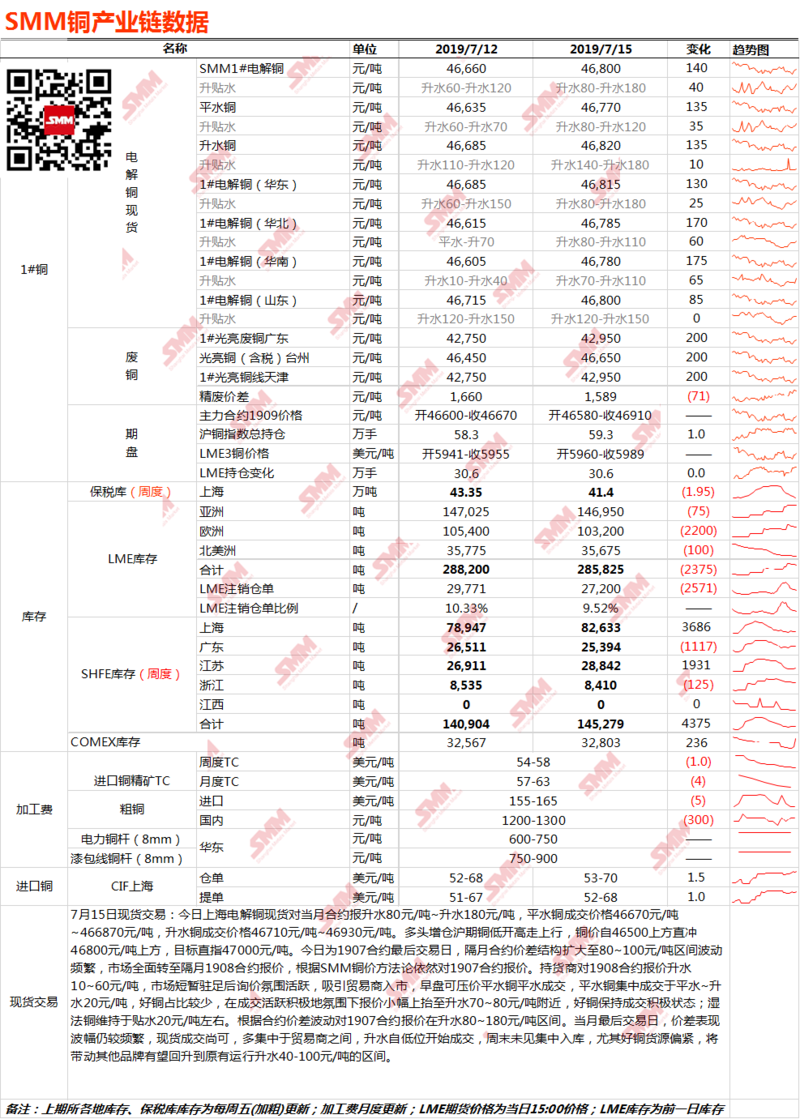 [7.16 SMM Bronze Morning minutes] Macro: 1) US Treasury Secretary Mnuchin expects another conference call with China at the level of key coordinator this week, and if the discussions are fruitful, he and Trade Representative Lettershitzer may travel to Beijing for trade negotiations. 2) China's gross domestic product (GDP) in the first half of this year was 45.0933 trillion yuan, an increase of 6.3 per cent over the same period last year in terms of comparable prices. GDP rose 6.2% in the second quarter from a year earlier, down 0.2% from the first quarter. 3) in the first half of the year, the added value of industries above scale in China increased by 6.0% compared with the same period last year, and the added value of industries above scale increased by 6.3% in June compared with the same period last year. Fixed asset investment rose 5.8% in the first half of the year compared with the same period last year, and 5.6% from January to May. Of this total, private fixed asset investment increased by 5.7% over the same period last year, an increase of 0.4 percentage points over the period from January to May. Fundamentals: 1) scrap copper: yesterday refined scrap price difference of 1589 yuan / ton. Fine waste price gap expanded, downstream waste enterprises quoted a slight increase, but the absolute price has not yet reached the psychological price of scrap copper holders, the market covered goods only slightly alleviated, market transactions cautiously for the better. The market expects copper futures to rise to help raise scrap copper prices. 2) imported copper: yesterday's import loss of about 100 yuan / ton. Friday afternoon, the market appeared a number of higher prices, market prices were temporarily raised, but at the same time there are still lower prices. On Monday, there were fewer inquiries, the market quotation fell back to the previous level, and the transaction was light. Bonded stocks fell by nearly 20,000 tons last week, and there are still some customs declaration imports. 3) stocks: LME copper stocks decreased by 2375 tons to 285825 tons on July 15, and copper warehouse receipts by 823 tons to 65923 tons in the previous period. 4) spot: spot delivery ended yesterday, the current market price rise, will curb a wave of buying, the market buying will stimulate the holder to lower the quotation. It is expected that the spot water will rise by 20 yuan to 80 yuan per ton today. Copper prices and forecasts: last night Lun Copper fell back from a high of $6020 per ton, Shanghai Copper performance was higher than 47100 yuan / ton, short positions were afraid of high positions, and Shanghai Copper Index positions fell 9388 hands to 584000 hands in the evening. In the evening, mainly due to the release of the New York Fed manufacturing data last night exceeded expectations, positive for the dollar, copper prices under pressure. At present, the US dollar has rallied again near the 97 mark, waiting for the opportunity to rush up, and the market is looking forward to the Fed's policy meeting next week. In addition, domestic economic data have stabilized in recent days, market confidence has been stable, and good metals. Shanghai copper high up the 47100 pass, and below by the 20-day EMA support, MACD index red column pull up, the overall performance is better. It is expected to be 5975 to 6020 US dollars per ton for London copper and 46700 to 47200 yuan per ton for Shanghai copper today.