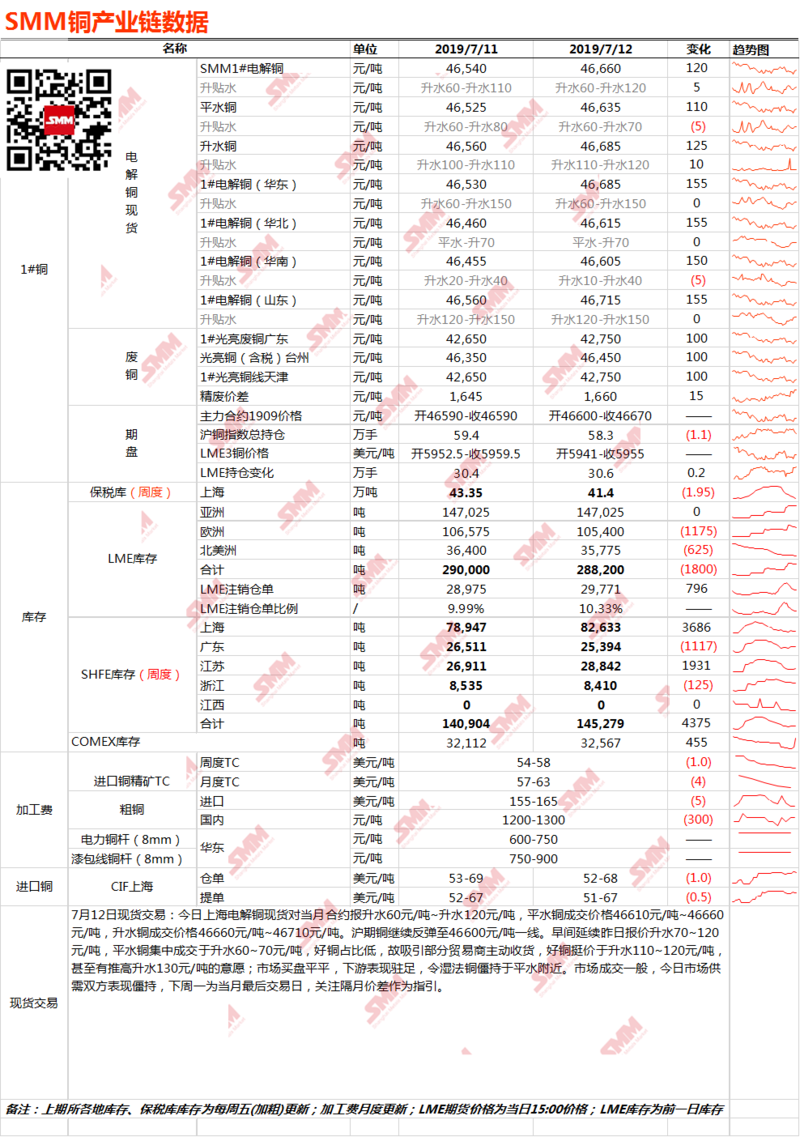 [7.15 SMM minutes] Macro: 1) the producer price index, excluding food and energy, rose 2.3 per cent in June from a year earlier, exceeding the median forecast of 2.1 per cent, suggesting inflation may start to stabilise. 2) China's credit and social finance data rebounded in June compared with the previous month, with the increase of 2.26 trillion yuan far exceeding expectations, the highest in three months. 3) as a result of the Sino-US trade war and the global economic slowdown, China's dollar-denominated exports fell 1.3 per cent in June from a year earlier, while imports fell 7.3 per cent, shrinking more than expected, with imports from the United States falling 31.4 per cent year-on-year and a trade surplus of $50.98 billion. Fundamentals: 1) Copper concentrate: last week, the quotation of copper concentrate TC continued to be downgraded. It is reported that some small and medium-sized smelters that are not CSPT have already made offers of US $53 / ton, and most of the copper smelters and large refineries of the CSPT Group have stuck to more than US $55 / ton. The overall tight pattern of copper mines has not changed, and some smelters have begun to worry about the purchase of copper mines next year. 2) waste copper: last week, the price difference of refined waste increased by 368 yuan / ton compared with the month-on-month ratio. Shanghai copper prices fell sharply last week and quickly rebounded, but the price center of gravity is still low, scrap copper traders shipments have not improved. Scrap copper rod plants are still in a loss-making production state, production enthusiasm is not high, after the price fall, the downstream reserve is more cautious, superimposed demand is weak, orders have not improved, the scrap copper market continues to be in the doldrums. Due to the poor demand for scrap copper with tickets, the number of scrap copper tickets dropped from 6% to 5% in the past month. 3) imported copper: last week, Yangshan copper premium showed a high stalemate and then weakened slightly. Import profits and losses were maintained at a small loss, the import window was occasionally close to open at the beginning of the week, the market temporarily appeared strong price sentiment, the quotation rose slightly. However, demand remained weak, buyers and sellers were difficult to close at high prices, and prices then began to weaken slightly, basically returning to the level at the beginning of the week, during which the price did not fluctuate significantly. 4) stocks: LME copper stocks decreased by 1800 tons to 288200 tons on 12 July. Copper stocks in the Shanghai bonded area fell 19500 tons last week from a month earlier. Last week copper stocks increased by 4375 tons to 145279 tons 5) spot: spot today focused on delivery, the current market is mainly on the current contract quotations, the overall market trading sentiment is more stalemate, today, despite the impact of delivery, but the rising water expectations remain high. It is expected that the spot water will rise by 50 yuan to 130 yuan per ton today. Copper prices and forecasts: Shanghai copper night trading on Friday showed a low opening high trend, opening low of 46530 yuan / ton, and then all the way up, closing at 46740 yuan / ton, bulls took advantage of the opportunity to enter the market, the Shanghai copper index increased its position by more than 4, 000 hands to 587000 hands in the evening. Lun Copper showed a "V" type of reverse rise at night, up to 6000 gate position. The dollar broke the 96.8 mark in the evening as expectations of a Fed rate cut rose, while domestic social and financial data exceeded expectations, boosting confidence in economic stability and supporting higher copper prices. At present, under the influence of Powell doves, the market is waiting for the Fed to further release the signal of interest rate cuts, which is good for copper prices in the short term. In addition, crude oil continues to be affected by geographical and climatic factors, and oil prices remain stable near gate 60, supporting copper prices. Today, focus on the upcoming release of domestic industry and social consumption data, will guide the market. At present, Shanghai copper collection entity Dayang column, the upper lead breaks the 40-day EMA, the bottom is supported by the 10-day EMA, the MACD index red column is elongated, and the technical aspect is good for copper prices. It is expected that copper prices will continue to maintain a high and volatile pattern today, with London Copper 5945 to 5990 US dollars per ton and Shanghai Copper 46500 to 46900 yuan per ton.