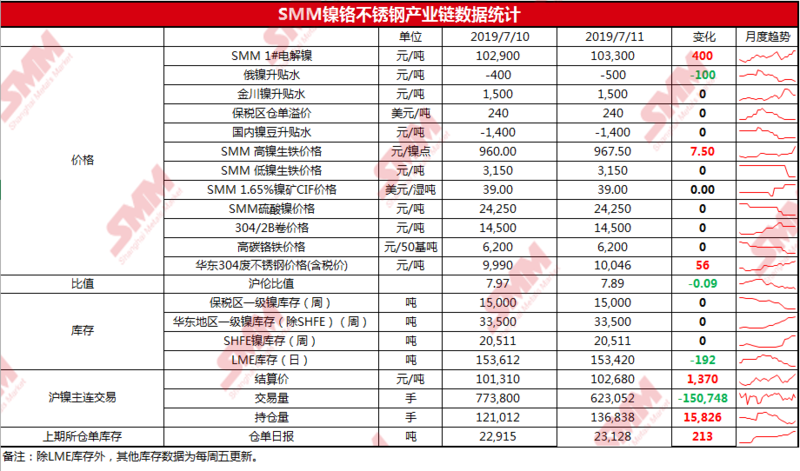 Macroscopically, yesterday the United States as of July 6 in the week of initial jobless claims (10,000) announced: 20.9, down to a three-month low. The core CPI rate rose 0.3 per cent in June, the biggest increase since January 2018, after rising 0.1 per cent for the fourth month in a row. The dollar was supported by two better-than-expected figures released in the US. Today's data should focus on China's M2 annual rate of money supply in June; the monthly rate of industrial output in the euro zone in May; the monthly PPI rate in June in the United States; in the afternoon, the Information Office of the State Council held a press conference, Li Kuiwen, spokesman for the General Administration of Customs and director of the Statistical Analysis Department, gave a briefing on China's imports and exports in the first half of 2019 and answered questions; IEA released its monthly crude oil market report.

Nickel price judgment: in the near future, the fundamentals are still not significantly changed, the macro environment is also neutral, some of the single profit-taking tendency or make the disk temporarily rest, expected to stay high in the short term shock, but the domestic import window is completely closed, nickel inventory data in the recent low, do not rule out the later bulls after the re-trial to continue to raise the price of the outside market.