CST
translation
Source:SMM
SMM, June 25-the main 1908 contract in Shanghai today reduced its position by nearly 26000, pulling up 2.39%. Throughout the recent fundamentals, the main changes are as follows:

Today, the Shanghai Zinc main 1908 contract reduced its position by nearly 26000, up 2.39%. Throughout the recent fundamentals, the main changes are as follows:

First, SMM zinc stocks fell slightly to 153700 tons (down 1600 tons from Friday), mainly due to low prices to stimulate the enthusiasm of downstream replenishment.

Second, SHFE zinc warehouse receipts fell by 10286 tons yesterday and continued to drop 3569 tons to 41978 tons today, with the total amount of warehouse receipts still at a high level and still concentrated in Guangdong (about 70 per cent). Consider or disassemble warehouse receipts into the spot market under the condition of rising water, and at the same time, some of them will be picked up and shipped out of the warehouse downstream at the end of the week. As the follow-up operation of nearly 55000 tons of delivery under contract 06 is not clear, and the current position in contract 07 is still relatively high, the market is still sceptical about whether there will be another squeeze on contract 07, and the rapid cancellation of warehouse receipts has led to a slight hesitation in short positions. SMM believes that attention should be paid to the zinc futures structure (which is a relatively early signal).

Third, with the rapid expansion of rising water in Shanghai stock market, and the rising water high level stabilized under the action of bargain buying in the lower reaches of Tianjin market, the price difference between Shanghai and Tianjin has rapidly expanded to about 200 yuan / ton since Pingshui last week, and is about to reach the cost line of moving storage. Tianjin City, as the representative of galvanizing consumption, the rapid removal of storage and high stable rising paste water to the market to convey a weak signal of galvanizing consumption, coupled with the recent positive attitude of high-level infrastructure to expand domestic demand, the market expectations of zinc consumption have increased. However, according to SMM, this round of low replenishment reservoir has overdrawn downstream consumption for 1 to 2 weeks, after the subsequent increase in the arrival of goods in Tianjin, there is a downward pressure on the rising water. 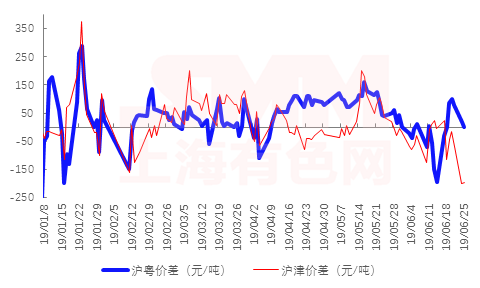 From June to July, due to the storage and maintenance plan of the northern smelter and the fact that Chengzhou mining and metallurgy has not yet been restored, the supply growth rate is expected to shrink in June, resulting in an adjustment of expectations.

Taken together, the rebound in zinc still falls within the scope of the expected difference adjustment for changes in supply. As June-July has entered the downstream traditional off-season, even if the supply growth is lower than expected, the same month is still expected to be in a positive growth state, zinc upward power may be limited.