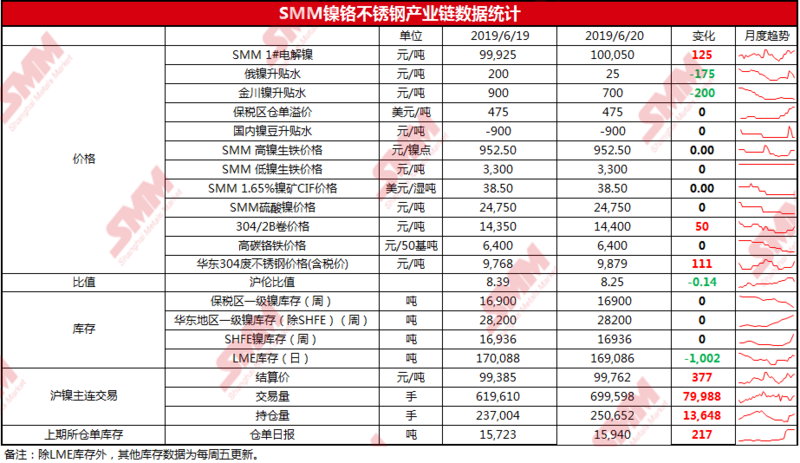 Macro: (2:00 Beijing time on June 20) the Federal Reserve announced that interest rates would remain unchanged, in line with widespread expectations, but also made major adjustments, making the market expect to cut interest rates in July by more than 90%. The dollar fell all the way down yesterday, brushing the latest two-week low; The renminbi rose again on Thursday, rising 500bp onshore, the biggest gain in nearly seven months, breaking the 6.85 mark, while offshore renminbi rose more than 400bp a day, up for three consecutive days. Crude oil, supported by geo-tensions, US crude stocks fell and OPEC+ production fell, with PetroAmerica up more than 5 per cent and Brent up nearly 3.9 per cent. Data today is basically no important data, in the afternoon and evening will be released in the euro zone and the United States Markit manufacturing PMI initial value, the United States in May existing housing sales annualized total, and so on.

Nickel price judgment: with the decline of the squeeze atmosphere, the disk is difficult to return to strength, the price fluctuation in the short term is greatly affected by the macro mood, since the telephone exchange between Chinese and US leaders, trade war to return to the hope of negotiations, the macro atmosphere has improved, from the previous bad to neutral. It is expected that the nickel price is weak in the short term, and the space for a sharp decline is also very limited.