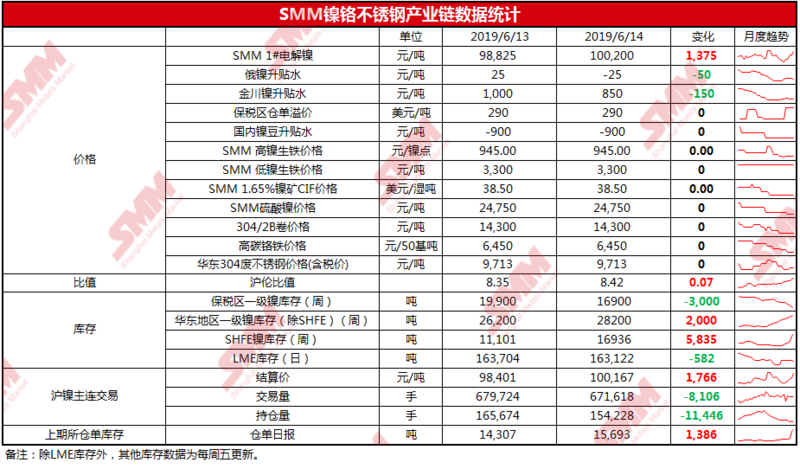 Macro: us retail sales data rose in May from the previous month, suggesting that consumers are starting to pick up, which could allay fears of a slowdown in the US economy. The monthly rate of industrial output in the United States in May was 0.4 percent, an increase in the first month of the year. The dollar index rose sharply on Friday night, or on the back of core retail and retail data in the US in May, but the dollar index continued to rise last week, making the market cautious about expectations of a rate cut. There are plenty of data this week, with data on May housing starts released on Tuesday, which will have a big impact on the dollar; Thursday's Fed interest rate decision and Powell's speech, which is closely related to the recent US interest rate cut, focus on the issue. Today should focus on the New York Fed manufacturing index, manufacturing jobs, price payments and price acquisition index for June; the NAHB house price index for June.

Nickel spot market: last week, the Russian nickel to Wuxi 1906 contract changed from last week's discount of 80 yuan / ton to flat water, Jinchuan 1906 contract week increased from about 650yuan / ton to 1000 yuan / ton. Last week Russia nickel gold Sichuan rising water is higher, although due to the absolute price is higher, downstream take goods situation is general, but because of the recent domestic warehouse risk, the holder is willing to lift the water. However, on Friday, the holder reported that due to the large number of imported goods, there may be a risk of rising water after moving the warehouse on the disk, and a discount of 50 yuan per ton or flat water delivery was quoted on Friday. Last week, prices rebounded all the way from 95500 yuan / ton to near the 101000 yuan / ton gate. Nickel prices in the first half of the week in the vicinity of 95500 yuan to 96100 yuan / ton consolidation, spot transactions improved, downstream basically in 9.58-96100 yuan / ton active transactions. In the second half of the week, with the continuous rise of prices, the downstream is flat, basically more in the wait and see. And Jinchuan nickel downstream transactions as a whole is relatively light, but traders are optimistic about the expansion of nickel back structure, believe that the late Jinchuan Shengshui will continue to rise, last week traders received Jinchuan nickel more positive, but throughout the week, due to the sharp rise in absolute prices, Jinchuan Russian nickel transactions are not as active as last week.

Nickel pig iron market: nickel prices continued to rise last week, but ferronickel did not rise, although a small number of factories tried to raise the offer, but did not really close the deal, traders take goods prices and steel mill inquiry prices still maintain the level before the surge, between the late supply release and the recent nickel price surge, buyers and sellers have differences, discount continues to expand. Steel mills generally maintain the inquiry prices of the previous week, or because stainless steel transactions have not improved, so steel mills still have low demand for raw materials, and at current prices, most nickel-iron factories are still profitable. Looking forward to the later stage, if the price of ferronickel rises with the price of nickel, but the price of stainless steel does not rise due to the pressure of inventory sales, or will have an impact on the new round of raw material reserves in some steel mills, resulting in a narrowing of the profits of steel mills, but it is relatively certain that with the supply of ferronickel more abundant, ferronickel is expected to continue to maintain the discount.

Stainless steel market: last week 200 series, 400 series stainless steel prices fell slightly by 50 yuan / ton, 300 series prices maintain stable operation. 200 series price weak and stable operation, downstream agent price reduction to promote the transaction, the overall market atmosphere is empty. The price of the 400 series was mainly dragged down by the fall in the price of high-carbon ferrochromium at the raw material end, which was cut by 50 yuan per ton last week. Last week, the price of the 300series was affected by the nickel price, and the market quotation was mixed. According to SMM research, driven by the nickel price, the guidance price of the stainless steel factory was raised, and the downstream agent raised the quotation slightly, but the transaction was light. On the supply side, because of the power limit and the impact on some production lines, South China Steel works will carry out 10 to 15 days of maintenance this week, which is expected to affect production capacity of 30, 000 tons, and stainless steel plants with a capacity of 3 million tons in another year will be overhauled for one week, which is expected to affect production capacity of 10, 000 to 20, 000 tons. The price of 300 series fluctuates with the price of nickel in the short term. If nickel prices are firm to the end of June, stainless steel prices stabilize, steel mills are expected to maintain normal production in July.

As of Friday, total nickel inventories in Shanghai, including stocks in the previous period, were up 8.5 per cent, or 8.5 per cent, from the previous week to 62000 tonnes, according to SMM research. The specific changes are as follows: inventory in East China increased by 2000 tons to 28200 tons, mainly due to good import profits in the near future, bonded areas and long-term goods coming to Hong Kong have been declared to enter the mainland one after another. Over the same period, refined nickel stocks in Shanghai Free Trade Zone decreased by 3000 tons to 16900 tons.

Nickel price judgment: Shanghai nickel 1907 and 1909 contract back structure is still between 1400 and 1500 yuan, the risk of extrusion has not disappeared, it is expected to maintain a high price in the short term, but the increase in the inventory of deliverables is also worth noting, from the current strength has shown that the bulls have the upper hand, need to wait and see the further operation of both sides. At this stage, the fundamentals do not dominate the main factors of short-term price fluctuations, the fundamentals of nickel itself have not changed much, on the supply side, the pure nickel import window is still open, the overall supply of nickel pig iron is normal, and the number of days affected by floods in Indonesia is limited. Downstream stainless steel plants are expected to maintain the overall rigid demand for a small amount of maintenance in the later period; downstream stainless steel has not received a significant boost after the nickel price has recovered.

China’s metals export and import data for March
China’s customs administration has released March import and export data for nonferrous metals products, which could provide some cues and a sneak peak into the impact from the COVID-19 pandemic and subsequent lockdown to businesses.

SMM Evening Comments (Mar 30): Shanghai base metals mostly gave up gains from last week
SHFE nonferrous metals, except for tin and nickel, traded lower on Monday, giving up the rebound from last Friday as investors remained cautious about the economic toll of the COVID-19 pandemic.

SMM Morning Comments (Mar 27): Base metals rose on stimulus support
London and Shanghai base metals cruised broadly higher in early morning trade on Friday, as a series of stimulus steps around the world, including a gigantic US package, calmed a panic over a global recession following the coronavirus outbreak.

SMM Evening Comments (Mar 23): Shanghai base metals lower across the board on COVID-19 uncertainty
SHFE nonferrous metals declined across the board on Monday, giving up gains from last Friday, as uncertainties around the economic impact of the fast-spreading coronavirus outbreak continued to depress investors’ sentiment.

SMM Morning Comments (Mar 23): Base metals opened broadly lower; Shanghai copper briefly hit ‘limit down’
London and Shanghai base metals traded lower across the board in early morning trade on Monday, extending declines from the prior week, as fears over the economic impact of the global coronavirus outbreak continue to weigh heavily on investor sentiment. The most active SHFE copper contract for May delivery plunged 8% to hit its “limit down” level at 35,300 yuan/mt shortly after the opening the bell.