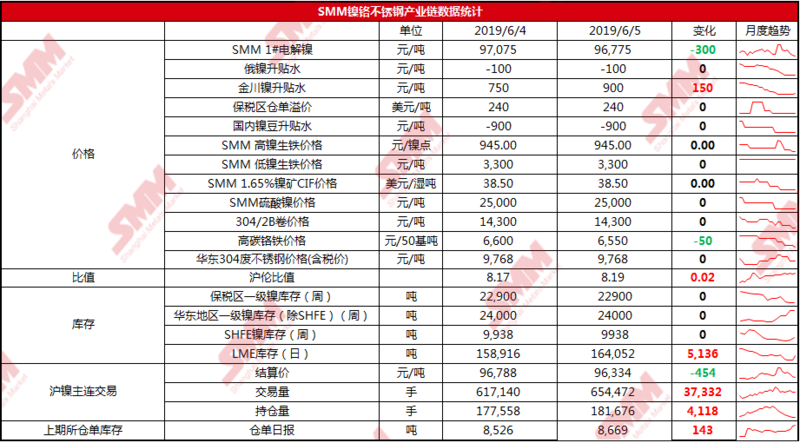 Macroscopically, data released by the US Energy Information Administration (EIA) showed that crude oil stocks increased by 6.771 million tons to the highest level since July 2017, while overall US oil stocks rose to the highest level since 1990. Us crude and Brent crude both tumbled, falling nearly 2.4 per cent and 1.54 per cent, respectively. Us ADP employment fell to its lowest level since March 2010 in May, another hint of weakness in the US economy. Nickel both inside and outside the market fell, nickel fell nearly 0.7%, Shanghai nickel fell nearly 1%. In China, the PMI52.7, integrated PMI51.5, of Caixin service industry in May was higher than the line of prosperity and decline. On June 6, China will issue a 5G business license, and China will officially enter the first year of 5G business. Today, we should pay attention to the final year-on-year and quarter-on-quarter final value of GDP in the euro area in the first quarter. ECB deposit convenience interest rate, marginal loan rate, main refinancing rate, ECB President Draghi spoke after the policy meeting. The United States trade account (US $100 million) in April and the number of first-time jobless claims in the United States in the week of June 1 (10,000).

Nickel price judgment: on the basis of nickel is still in a negative state, but in the near future the trend of the capital surface multi-empty game may have a greater impact on the disk, the uncertainty is strong. LME nickel stocks were 164052 tons on June 5, an increase of 5136 tons over the previous day, with the vast majority of increments coming from Dubai warehouses, accounting for 93.2 per cent of the total. The strong bulls have a tendency to push positions, so that the market is difficult to know the hidden inventory suddenly surfaced, the event in the future or will continue to ferment, and does not rule out the possibility of such hidden inventory also exists in China.

Nickel spot market: yesterday, Russia nickel than Wuxi 1906 universal discount 100 to 50 yuan / ton, Jinchuan nickel than Wuxi 1906 contract generally reported 900 to 1000 yuan / ton. Some traders rose 800 yuan / ton trading part of Jinchuan nickel, but later basically raised Jinchuan Shengshui. In the morning, the market price was consolidated around 9.63-96400 yuan / ton, and the market activity was slightly improved compared with the day before yesterday. Traders reported that the inventory in the early downstream was lower, and now the absolute price is appropriate, so they began to purchase in the market. Jinchuan supply due to recent logistics reasons, Shanghai supply is a little tight, rising water has picked up. Jinchuan ex-factory price quoted 97200 yuan / ton, unchanged from the day before yesterday, the mainstream transaction at 96250 to 97300 yuan / ton

Stainless steel market: downstream agents are not active in receiving steel plant resources, and strive to clear their own inventory, but also enhance the possibility of steel plant inventory accumulation. According to the latest SMM research, a stainless steel plant in East China in May 3 series slightly reduced 3000 tons, or converted to other departments. On June 5, the stainless steel market steel mill guidance price is the same as the day before yesterday, the market trading atmosphere is cold, the transaction is weak. Wuxi market, 304 2B four feet (Hongwang) quote 13700 to 13800 yuan / ton; 201 × 2B (Hongwang) rough edge base price 8200 to 8250 yuan / ton. Some agents said that they would allow a profit of 50 to 100 yuan per ton according to the specific trading conditions of the order.

Nickel sulfate market: according to SMM research, nickel sulfate in May not only showed a downward trend, its shipment situation is also significantly lower than in April, from the previous supply exceeds demand to the current shipping pressure situation. For some large nickel sulfate manufacturers working with large downstream plants, the impact is not great for the time being, while several small factories say that orders have not been well received in the near future, and there is still a lot of room for orders in June.