CST
translation
Source:SMM
Last week, the average weekly loss of stainless steel plants across the country expanded to 300 yuan per ton compared with the week before last, and no steel mills have opened large-scale maintenance for the time being. Among them, an annual production capacity of 1.2 million steel plants in East China plans to reduce production by 3000 tons 316L in June, due to the 316L market is worse than 304. or will be converted to other departments. A stainless steel plant with an annual production capacity of 1.2 million tons in Northwest China plans to start annual maintenance from June to July, which is expected to affect production of 15000 tons in June, of which 5000 tons are 300 tons and 400 tons are 10, 000 tons. Annual maintenance of cold rolling equipment in July. 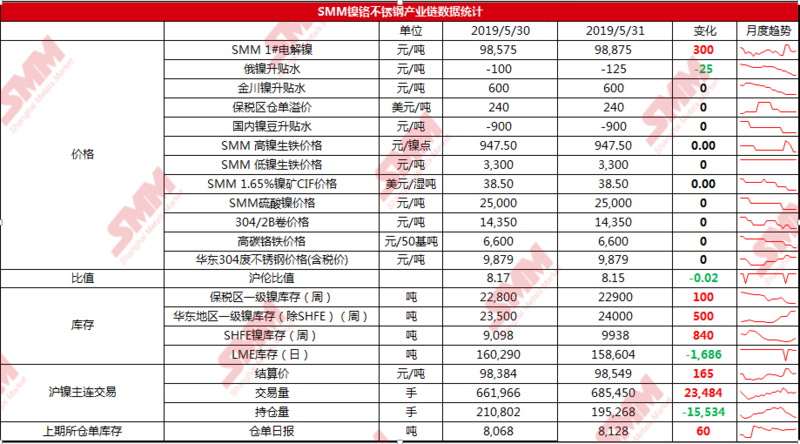 On the macro front, the dollar index fell on Friday, breaking the 5th, 10th and 20th EMA in a row, to a low since May 27. The United States imposed tariffs on Mexican exports to the United States, sparking turmoil in financial markets and fears of recession. Affected by the international trade situation, investors flocked to the safe haven asset yen, making the yen record its best one-day performance against the dollar in four months. In addition, us bond yields tumbled again after stabilising at one point, with the 10-year yield falling to 2.17 per cent, the lowest since September 2017, making dollar assets less attractive to foreign investors. On the crude side, both US crude and Brent crude tumbled more than 5 per cent, mainly because US President Donald Trump continued to wave a trade stick to hit global demand prospects, and on the other hand, there are signs that the United States is making concessions on the issue of sanctions against Iran.

Spot: last Friday SMM 1 # electrolytic nickel 98500 to 99250 yuan / ton. In the morning, Russia nickel than Wuxi 1906 universal discount 150 to 100 yuan / ton, Jinchuan nickel than Wuxi 1906 contract generally reported water 600 yuan / ton. In the past two days, there are signs that the market has stopped falling. In the past, there were some wait-and-see downstream. Now Russian nickel discount 150 yuan / ton has been purchased in the market around 98600 yuan / ton, but the quantity is not large, and the overall spot transaction is still relatively weak. Near the end of the month, And the absolute price is still high, downstream procurement is cautious. And the market expects that the supply of goods will gradually increase in the later period, there is no hurry to purchase. Jinchuan ex-factory price quoted 99000 yuan / ton, up 300 yuan / ton from the previous day, the mainstream transaction at 98400 99100 yuan / ton. Afternoon nickel price up and down 400 yuan / ton shock, the end of the month plus Friday spot has been basically no transaction, last week spot transaction is unusually light, the mainstream transaction in 98200 to 99000 yuan / ton. Stainless steel market: last week, the average weekly loss of the national stainless steel plant expanded to 300 yuan / ton compared with the week before last, and no steel plant has opened a large-scale overhaul for the time being. Among them, an annual production capacity of 1.2 million steel plants in East China plans to reduce production by 3000 tons 316L in June, due to the 316L market is worse than 304. or will be converted to other departments. A stainless steel plant with an annual production capacity of 1.2 million tons in Northwest China plans to start annual maintenance from June to July, which is expected to affect production of 15000 tons in June, of which 5000 tons are 300 tons and 400 tons are 10, 000 tons. Annual maintenance of cold rolling equipment in July. According to SMM research, the East China market last week 304 cold hot rolling transaction is poor. Steel mills cut the guiding price, some agents let profit shipment, but the downstream demand is weak, the transaction has not been improved.

In terms of inventories, nickel stocks were 158600 tons on the 31st, down 1686 tons from the previous day. Last Friday, the stock of Shanghai Stock Exchange + East China Stock + Free Trade Zone totaled 5.68 tons, an increase of 2.6% over the previous Friday. Specifically: last period stocks of 9900 tons, an increase of 840 tons compared with the previous Friday; East China stocks last Friday increased by 9900 tons to 24000 tons, bonded area stocks increased by 100, about 22900 tons.