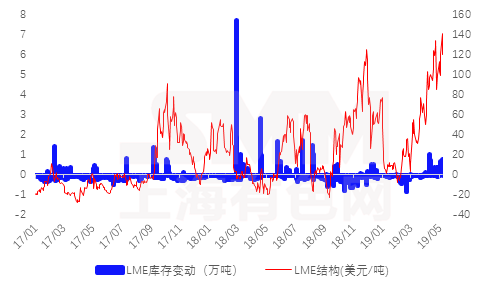 This week will usher in the monthly centralized delivery of LME, the LME0-3 spread has remained at more than US $100 / ton since April, and LME zinc stocks have slowly increased to about 105000 tons, an increase of more than 100 percent, from an all-time low of about 50, 000 tons since the millennium. And the inventory increment is all contributed by Europe (Frisinne and Rotterdam warehouses in the Netherlands). And on May 13 refresh the all-time high to 141 US dollars / ton, if only from the point of view of foreign trade quotation, this price is close to the overseas level of imported zinc.

The rising LME0-3 price difference plays the role of guiding social inventory back to LME warehouse, but so far the inventory increment is still limited, only rising to about 100000 tons, indicating that the overseas hidden inventory stock is relatively limited. The current inventory remains low, but has been out of the dangerous position, after the delivery, the overseas structure may temporarily fall back; In addition, the recent increase in the proportion of LME write-off warehouse receipts from about 3% to about 14% may indicate that the subsequent LME inventory may still decline, and the strong position of overseas fundamentals will be maintained, in contrast to the further weakening of domestic fundamentals. This means that the import profit window is unlikely to open.

In China, on the other hand, the gradual peak of processing fees means that the transmission from loose ore to ingot has been dredged, the bottleneck of domestic smelter capacity will be broken, and the domestic supply will accelerate the recovery and gradually approach the peak. Under the incentive of high profits, smelter output will wander near the peak, with the advance of time, domestic inventories will rise low to form a cumulative pool. 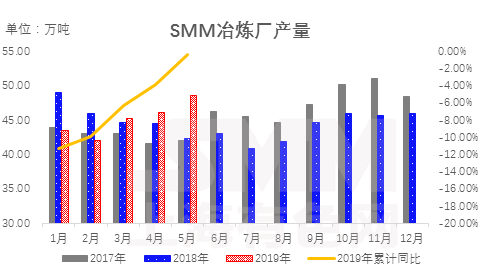 The domestic supply pressure has been significantly weakened, the need for the inflow of imported zinc no longer exists, and the high import loss means that the global trade structure of zinc ingots will be adjusted and the domestic imports will be reduced to overseas self-digestion or overseas accumulation.

The recent trade war began again, the squeeze on demand is more intense, although the transmission from the terminal to the primary consumer side still takes time, but after the deceleration of the export carriage, there is still a lot of pressure to rely only on the expansion of domestic demand.

In the short term, the slow growth of domestic supply does not constitute cumulative pressure for the time being, and there is still a game between the expectation of long-term supply growth and short-term consumption, and the decline in zinc futures will not be very smooth. At the same time, we should carefully consider the guidance of the transformation of macro-sentiment in the vacuum period prior to the implementation of mutual tariffs between China and the United States.