Before the domestic market resumes this week, Trump Twitter diplomacy is expected to push the good economic and trade friction between China and the United States into the spotlight again in a way that escalates the friction. As a result, the stock market fell sharply, and the basic metals could not hide their decadence, and zinc was the leading base metal. In addition to macro-bearish catalysis, the fundamentals of zinc also changed:

Towards the middle of the year, the rapid upward processing fees have shown a momentum of stabilization, and the redistribution of profits between mines and smelters on the relationship between supply and demand of zinc concentrate has temporarily come to an end. At the same time, due to the differentiation of internal and external fundamentals so far, overseas under the guidance of low inventory to maintain a high Back structure, import losses to maintain a high level, have a certain inhibitory effect on imports, a higher level of processing fees, The space for the active increase of processing fees to squeeze the synchronous increase of domestic processing fees is also relatively limited. In the later stage, we should focus on the import volume of domestic zinc concentrate. If the import volume is not further blowout, the ore relaxation has temporarily entered the platform area.

After the redistribution of profits has been basically completed, it also means that the transmission channel from loose ore to loose ingots is about to be dredged. From April to now, Huayuan area in Hunan Province has gradually recovered and will reach production. After the relocation of Zhuzhou smelter, the production line of refined zinc will be completed soon. Hanzhong is also increasing production as planned, and the pre-existing capacity bottlenecks are about to become a thing of the past, with limited overhauling refineries in May and a peak in domestic refined zinc supply from May to June. Demand-side gold 3 silver 4 has passed, demand will pick up in May, demand from the real estate and automobile sectors is weak, and there is no bright spot in the boost from infrastructure to zinc consumption. The game war between unclear consumption and clear supply can easily lead to a one-sided collapse.

As an observation index of refined zinc supply and demand, social inventory and spot discount in three places have been flat so far, and the purchase is also more cautious. 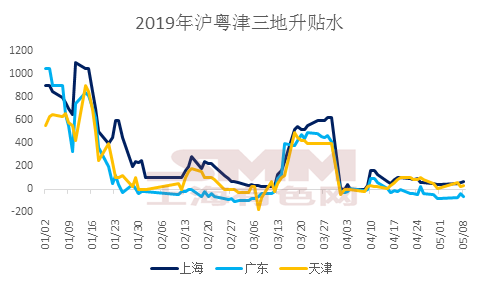 Looking at overseas, with several rounds of warehouse delivery stimulated by high Back, the total amount of overseas inventory has got rid of the historical low, and the current Back structure has not weakened the expectation, the expectation of inventory growth will not weaken, and at the same time, the economic and trade friction between China and the United States will make waves again. With the increasing pressure of RMB devaluation, there is no strong support for Len Zinc, coupled with the relatively low internal and external price ratio, the proportion of internal and external reverse funds is higher, which also means that Len Zinc itself is weak, and there are no high expectations for domestic support.

Generally speaking, when consumption expectations gradually cool down, market priority transactions supply growth expectations and facts, only fundamental considerations, zinc prices still have greater downward pressure from May to June, during which appropriate adjustments and adjustments will be made to the changes in consumption.

At the same time, considering the resumption of the Sino-US trade war, driven by market sentiment, if the final round of negotiations between China and the United States does not have a good outcome, then zinc does not rule out the possibility of another emotional overfall.