CST
Source:SMM
The future of copper price is still uncertain as mining companies and smelting enterprises hold different views on the supply in 2018.

SHANGHAI, Nov 16 (SMM) – Oversea copper mine producers and Chinese smelter enterprises has already disagreed with each other on the future of copper supply before the long-term TC/RCs negotiations of 2018 kicked off.

In this year’s LME Week which ended recently, the big copper mining company Freeport-McMoRanInc was the first to express their views: Owing to the short of copper supply in the market, Freeport planned to lower their refinery charges and would aim to decrease the TC/RCs for copper concentrates in long-term supply deals.

Codelco’s words were more surprising: Copper’s supply-demand balance would switch to a “substantial” short of supply in 2018, and copper price might surpass USD 10,000 / tonne, a record high.

Chinese smelting enterprises responded to these comments. A senior official of the China Smelters Purchase Team (CSPT) said this Tuesday that ten enterprise members had had a meeting for a “comprehensive and systematic analysis”. He believed that copper supply and demand would stay at an overall balance in 2018, and there would be no “short of supply” regardless of the influence on smelters from measures for environment protection. 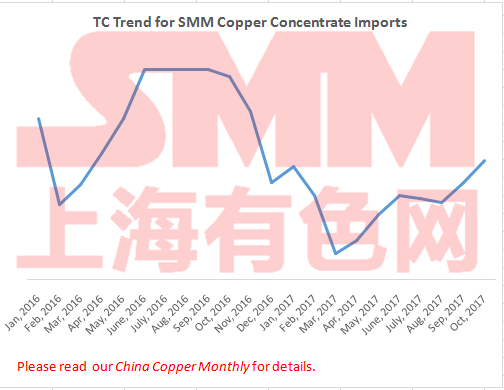 According to SMM, strikes and work stoppage brought a sharp decline of TC for copper concentrate spots earlier this year, but the TC has rallied since March as the production resumed.

The battle before the negotiation is expected to be tenser. It is believed that the representative of smelting enterprises will be Jiangxi Copper or Tongling Nonferrous Metals, and Antofagasta or Freeport-McMoRan will be representing mining companies.

It is for certain that both sides should go for a win-win situation on the negotiation. They will be long-term partners no whatever the result is. Mutual benefits are the basis for long cooperation.

The article is edited by SMM and is provided for information purpose only. It does not mean SMM agrees with its views and SMM assumes no liability for accuracy of information contained or quoted in the article.