CST
smm insight
Source:SMM
Copper rod market will remain in oversupply within two years, while demand growth will be steady. Copper rod is mainly divided into two kinds, employing domestic and foreign production technologies, respectively, with foreign technologies mainly US’s SCR and Germany’s SMS SIEMAG process. Most medium and large producers produce by foreign continuous casting and rolling equipment, leading to high production efficiency and high quality of goods. Those producers held operating rate at 73% in 2016. Small producers mainly produce by up-draw process, which had low production efficiency. Many small producers closed down due to weak risk resistance capability, and those producers reported low operating rate at 31.7% in 2016. Moreover, proportion of capacity produced by foreign equipment grew to 74% in 2017 from 2012’s 51.8%, and will keep rising. Copper rod industry has high industrial concentration, with capacity at top 20 producers accounting for 53%, and capacity in east China occupies 70.9%. However, it should be noted that rod producers are likely to expanded capacities in west China, which had rich copper ore resources, in order to reduce costs. 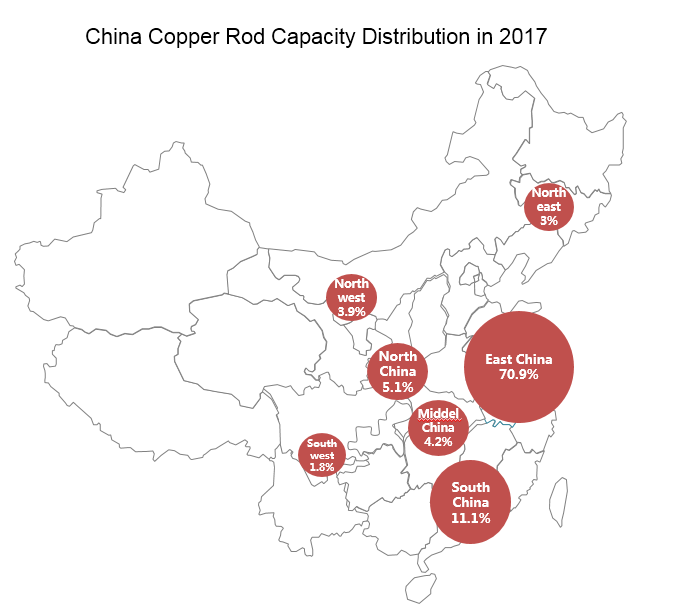 China’s copper rod sector is facing industrial shuffle. Many producers are suffering losses due to cutthroat competition, and processing fees have dropped to 500-700 yuan per tonne so far. Producers, with low production efficiency, high cost and weak risk resistance capability, are eliminated gradually. However, copper rod market will remain in oversupply within two years, while demand growth will be steady.

For news cooperation, please contact us by email: sallyzhang@smm.cn or service.en@smm.cn

COMEX Copper Inventories (2017-10-9)
The table below shows copper inventories on the COMEX on October 9.

LME Copper to Breach $7,500 in 2018, and China Copper Concentrate TCs to Slide
One industry insider reckons TCs of spot copper concentrate will slide in the near term, but has no idea about floor price for term TCs in 2018.

LME Base Metals Cash to 3-Month Backwardation/Contango (2017-9-25)
The table below shows cash to 3-month backwardation/contango of base metals on the LME.

Base Metals Fall after China Data, with SHFE Nickel Plunging 4.3%, SMM Reports
Base metals prices mostly fell today after the release of Chinese economic indicators most of which were downbeat, SMM reported.

LME Copper Net Longs Fall Sharply Last Week after Growing for 7 Weeks
Net long positions on LME copper held by fund managers decreased noticeably in the week ended September 8 after growing for 7 weeks in a row, according to LME report.