Today, a total of 76 shares rose by the daily limit, 12 even-board shares, 17 failed to seal the board, with a sealing rate of 82%; Changlian shares 6-board, Blue Flame Holdings, Tianlong shares 3-board. On the market, 2820 stocks rose and 1738 stocks fell. Aquaculture, auto parts and semiconductor chips were among the top gainers, while real estate, coal, securities and banks led the decline.

Huaxi Securities said that the expectation of aggressive interest rate hikes by the Federal Reserve and the domestic epidemic restricted market risk appetite, and the continued development of the epidemic led to short-term pressure on the domestic economy, poor logistics and supply chain disturbances caused some enterprises to stop production, and household consumption was affected. Before the epidemic becomes clear, it is expected that A shares will still be dominated by repeated bottoming. The landing of the reserve cut in April sends a signal that "steady growth" will continue to increase, and follow-up attention will be paid to the landing of policies in key areas and the recovery of fundamentals: first, both epidemic prevention and control and logistics protection are expected to promote enterprises to return to work and production; second, on the consumption side, consumption vouchers and other policies to promote consumption may be introduced one after another; third, there is still room for independence in domestic monetary policy, wide credit still needs to be increased, and one-year and five-year LPR may be lowered. In style, the dividend strategy, steady growth value blue chip is still better.

Indicators show that the market short-term mood bidding rebounded sharply, opening near the 0 axis concussion, and then into a unilateral pullback state, closing below the low labyrinth area. 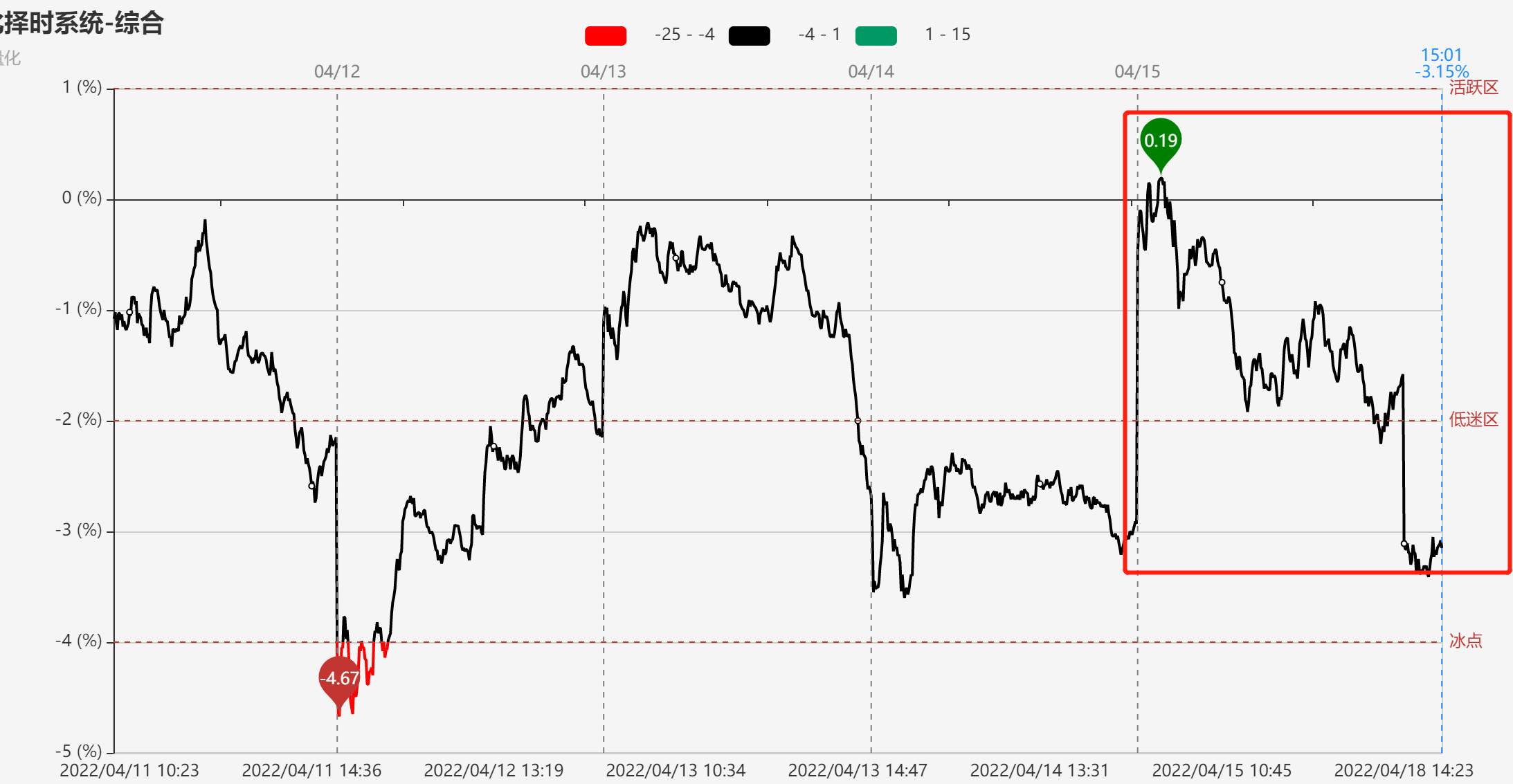 In terms of individual stocks, of the 11 shares on the board last Friday, 3 continued to rise by the daily limit and 3 fell by the limit. 6 Lianban Changlian shares staged Tiantian Board, while the real estate sector of Chongqing Development, China Jiaotong Real Estate, South Real Estate staged Tiandi Board.

In terms of the index, the bidding opened lower collectively and rebounded after the early trading shock. The gem index closed up 1.11% and the Prev index closed down 0.49%. The turnover of the two cities has decreased significantly, and under the background of leading the decline in the weight of brokerages and banks, the kinetic energy of the market as a whole is relatively limited. Northbound funds continue to be suspended and will be reopened tomorrow.

Auto parts stocks rose by the daily limit, Tianlong shares rose by the limit of 3, Changshu Auto Decoration Board 2, Ningbo founder, Bojun Technology, Zhongjie Seiko, Yingli Motor and more than 20 shares rose by the daily limit, as well as Cabe 100 million, Newtag, Dongjian Technology and so on rose by more than 10%. This direction has been in a negative state before, the recent news about the resumption of production is more, for the time being to retaliate against the pump.

In addition to auto parts, the track direction such as Lithium Storage, which has been in a negative state recently, has also rebounded. Sifang shares, Trina Solar Energy, Maiwei shares, Fudan Weidian, Shilan Weiwei, Shanghai Beiling, Fudan Micropower, etc., are among the top gainers, and they are also treated as retaliatory anti-pumping repair for the time being.

Logistics direction counterattack, Changlian shares 6 connected board, Feilida, delivery shares, Shanghai Yashi, Furan de limit. From the point of view of the target, it is basically concentrated in the Shanghai plate, which is likely to be related to the resumption of work.

Chicken farming as the representative of the direction of the breeding industry led the rise throughout the day, Xiantan shares, probiotics shares, Dongrui shares, Jinhe biology, Minhe shares, Guangdong feed limit. On the face of the news, there has been one of the worst bird flu outbreaks in history in the United States. Since mid-January, the bird flu outbreak in the United States has affected more than 24 million wild, commercial and domestic poultry. The virus is pushing up prices in the United States and poultry, and has increased the production cost of all kinds of food on the basis of existing inflationary pressures. In addition, France, Canada and other regions have also been affected.

It is understood that China will eat more than 14.27 million tons of chicken in 2020, with an average of 10 kilograms per person. The degree of import dependence is high. In 2020, China imported 1.433 million tons of chicken, mainly from Brazil, the United States, Russia, Thailand and other countries. Brazil is the largest source of imports, with imports of 637600 tons, accounting for 44.50 percent, followed by the United States, with 391100 tons, accounting for 27.30 percent.