CST
Source:Integrated microgrid
[IC insights: expects capital spending in the semiconductor industry to jump 24% to $190.4 billion in 2022.] after a 36% surge in 2021, capital spending in the semiconductor industry is expected to jump 24% in 2022 to an all-time high of $190.4 billion, up 86% from three years ago in 2019, according to a report released by research firm IC insights on March 1.

After surging 36 per cent in 2021, capital spending in the semiconductor industry is expected to soar 24 per cent in 2022 to an all-time high of $190.4 billion, up 86 per cent from 2019 three years ago, according to a report released by IC insights, a research firm.

In addition, if capital expenditure grows by more than 10 per cent in 2022, this means that the semiconductor industry will see three consecutive years of double-digit spending growth for the first time since 1993-1995.

The electronics industry was in many cases unprepared for the current rebound in demand because many supply chains were tight or disrupted during the novel coronavirus epidemic, the report said. The strong demand drives the utilization rate of most manufacturing facilities to be much higher than 90%, and even the utilization rate of many semiconductor foundry is 100%.

Based on such strong utilization and persistently high demand expectations, total capital expenditure in the semiconductor industry is expected to reach $344.3 billion in 2021 and 2022.

IC insights surveyed 13 sample companies around the world and predicted that their capital expenditure would increase by more than 40 per cent this year. Total spending by the 13 companies rose 62 per cent to $60.6 billion last year from 2020, and is expected to rise 52 per cent to $91.8 billion this year, the report said.

It is worth noting that the three major memory suppliers (Samsung, SK Hynix and Meguiar) are not on the list, while the top three pure wafer manufacturers (TSMC, United Power and Grid Core) are on the list. The diversity of the list shows that four of the top five analog IC suppliers (Texas Instruments, Analog Devices, Infineon and St) plan to significantly increase capital expenditure in 2022. 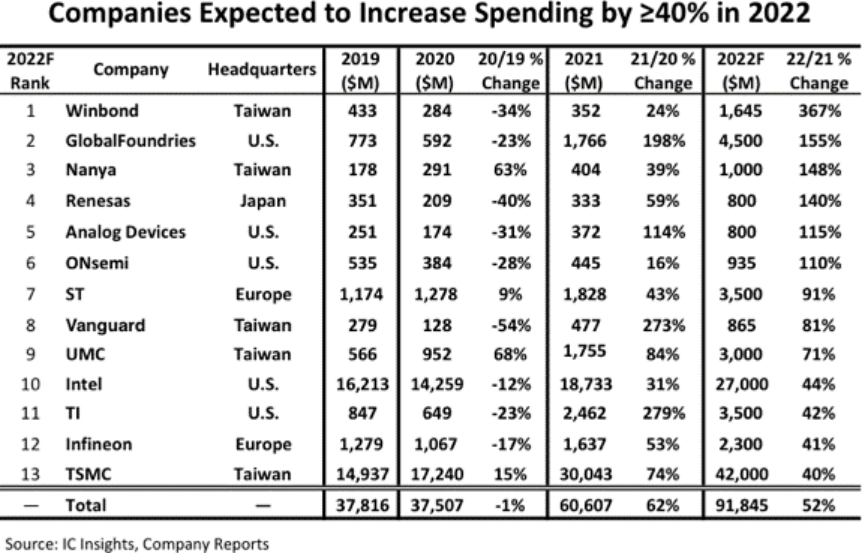 The total capital expenditure of the 13 companies is now expected to be 2.5 times what it was two years ago (2020). But most of these semiconductor manufacturers are responding to the current surge in demand. In the next few years, many companies' capital expenditure as a percentage of sales is likely to return to pre-novel coronavirus levels.

All
MOST POPULAR
1.What are Reasons behind the Sudden Surge in Polysilicon Prices?
2.China Weekly Inventory Summary and Data Wrap (Jan 20)
3.Ferromolybdenum Price to Maintain Momentum in 2023
4.A Sign of Downstream Demand Recovery as Silicon Wafer Prices Pick Up amid Low Inventory?
5.Manganese Ore Market is Cold and Prices Remain Stable Before CNY
Shanghai Metals Market
Privacy PolicyCompliance CentreSMM Credit ServiceContact UsAbout UsTerms & ConditionsSitemap
Notice: By accessing this site you agree that you will not copy or reproduce any part of its contents (including, but not limited to, single prices, graphs or news content) in any form or for any purpose whatsoever without the prior written consent of the publisher.